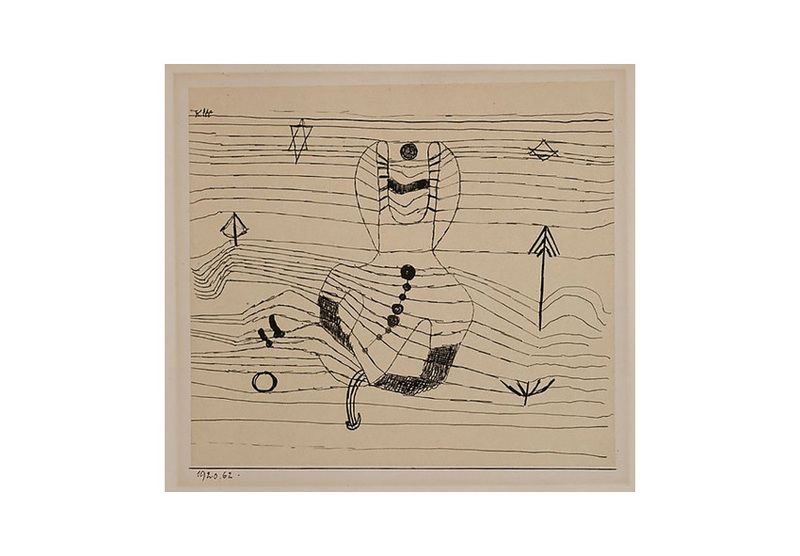 We need to develop a connection to worlds we cannot yet comprehend.

I am alone, walking in the woods. Around me, bare trees beneath a pale, overcast sky. Dead leaves and twigs crunch beneath my sneakers. Here, the dead and the living meet in a constant exchange, always touching, like opposing pages in a closed book. For a few minutes, I walk and take in the scene: a sparse deciduous forest, washed in gray and, aside from my breath and the sound of my long-sleeves rubbing against my waist, completely silent.

This time beyond time, in a space rich with meaningless forms, is neither relaxing nor frenzied. I have no concrete anxieties about what might constitute a threat to me in these empty woods, without even birds or deer to keep me company. And yet, I am aware that dangers abound.

Slowly, up ahead, something begins to appear. It comes forward, appearing as if from a fold in the ribbons of reality, which suddenly seems fragile and susceptible to unforeseen breaks.

I never knew how to describe the texture and appearance of the orb in my dream until recently. The most accurate way I can describe it, now in front of me, is that it is an occluded entity, visible only by deduction, and observable only because light bends around it. Just as I am beginning to understand the blurring sphere some 100 feet ahead of me, I realize that it is emitting a noise, an obscenely loud hum, infrasonic frequencies just recognizable enough to send icy chills down my spine. The sound overpowers me and it feels as though I’m on the brink of falling into a deeper crisis, which I am, for now, still able to forestall. And just as I begin to grasp a new dimension of the form, the orb begins, slowly, to approach me. Somehow, I know that it is “looking” at me. I take a step backward. A twig cracks from my shifting weight. I see that the orb is beginning to lose its basic Euclidean structure, it’s spherical shape distending, contorting, and mutating like a drop of black ink in a cup of water. In this entity, an entire schema is expressing itself: internally incongruent, constitutively heterogenous, radically dissimilar from itself, ineffable, groundless, unbounded, without kin, a metaphysical rōnin, completely unmoored – as I’m writing this, I look for synonyms or antonyms of words like “selfsame,” and found that the English language lacks words for a simple exposition of what I am attempting to describe.

Just as I prepare to flee, the mass rushes into my entire field of vision. In a pulsing, translucent, undulating effervescence, it completely swallows my vision, not unlike my Benign paroxysmal positional vertigo. I begin to run, screaming, in absolute terror. The figure races now ahead of me, above me in the treeline, beneath me by my sneakers. I have no reference for its shape, its size, its sound, its color, its patterns of movement.

As I’ve been having this dream irregularly for as long as I can remember (and with a long, multi-year period in my late teens when the dream ceased completely), I’ve told a fair amount of people about the nightmare, especially recently. When I wake up screaming is usually when people most want to know about it. Luckily, this doesn’t happen often, but I still tend to give people a heads-up when we are sharing sleeping quarters for the first time. There are two kinds of reactions to the dream, for the most part: either people listen and grapple with the story, and sit with it as an unfortunate experience they are thankful to not share, or they tell me that it must mean something. Of this second group, there is a special demographic who seem to believe that the mass is probably something that I need to “confront.” When people tell me this, I know that I’ve fundamentally misrepresented the dream to them.

The figure in the nightmare is not a hostile enemy or force one can simply confront. It is a reality one must respect despite lacking the comprehensive tools to understand it. It is our total, cosmological, reality. It is the chaotic flux of the universe at the fringes and excess of human cognition. It is the nothingness of space, an unadulterated experience of disarray, radically incompatible with human rationality and the laws governing this world. It is not a coincidence, I am sure, that this entire drama plays itself out in the woods, long the privileged sphere of magical and dangerous experience.

Being a vision of horror, my dream is also a vision of liberation. All liberatory fantasies scandalize, shock, and terrify the hegemonies from which they emerge. Wild creativity always takes the world by storm. The fact of absolute confusion, the dimension from out of which such a condition is able to emerge, is the same dimension from which a broader revolutionary fact springs forth: that a world could exist, and indeed it already does somewhere, that has nothing in common whatsoever with what currently exists. The existence of this other world, in infancy, in our nightmares, in the raw experience of inhumanity, is something one generally confronts as a problem to suppress, to steer, to govern and ultimately incorporate into the recognitive temples of thought. Demagogues of all stripes have made fortunes selling the desperate and anxious millions the lie that chaos, fear, and uncertainty are essentially coextensive with suffering. But as the great American civilization enters its definitive twilight; as ecological, military, and psychological disasters rend the planet for the next hundred years; perhaps a more open relationship to fear, to fear as such and not as a simple proxy for “suffering,” is called for.

We don’t really know what lies ahead, and maybe that’s a good thing. So let’s keep dreaming, and let’s keep loving. When we stumble on new horrors, it could be that a new phase of suffering is being unleashed, or else that a new arena of potential is just now being discovered. Only those who embrace fear will truly know the difference.