What happens when workers refuse to serve police?

The boar has not occasioned the end of life; she is life that goes on living without purpose. 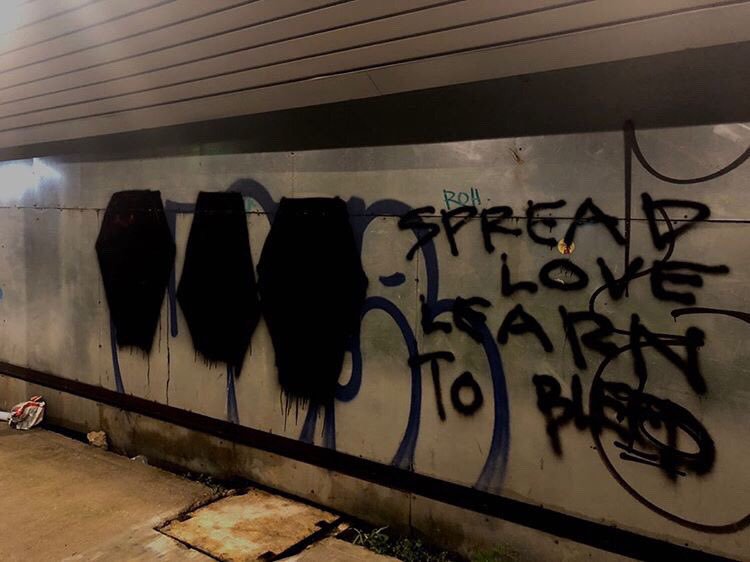 Home in the Middle of the End of the World

Within that forty minute set, bodies and the precarious spaces that contain them function differently, outside of utility-driven purpose, beyond simple economic functionality.

My friends and I are tucked behind Massachusetts Avenue, the short arterial stretch between MIT’s chrome-slicked imaginary and Harvard’s ivied traditions. I and a mass of other bedraggled people slowly pour out of the Cambridge Elks Lodge or Hardcore Stadium as it’s otherwise known. We are dehydrated but ecstatic. The bruises are beginning to take shape, the tissue damaged and the blood coagulating under the layers of skin. We swallow the cold air around us and catch our breath as its own miracle.

We compare aches, popping our loose shoulders and rolling their blades, feeling the strength return to them under the glow of the street lamps. Above us, the cranes overhead are bright and still, frozen against the nearly finished shell of a building. Cambridge is changing in slow motion, and it’s all we talk about sometimes. The building’s insides stick out, looming over us and the other buildings on the street. Light shines through the new facade in concrete, metal, and wood.

Show Me the Body’s set at Hardcore Stadium begins with lilted fingerpicking, the bare preamble of what is to follow. As he stands level with the front of the crowd, the singer, Julian Cashwan Pratt gears up to shout in the face of his closest onlookers. I’m standing with my friends feeling the dull heat of the room, which settles thick in the dipped valleys of the crowd. I press a cold beer against my face for relief. The basement fills with slick anticipation as the crowd lumbers and sways with the building melody. The middle of the floor parts slowly, and we shift with the rising line of guitar. Skinny boyfriends offer protective arms in front of their dates, girls in corset tops, pierced noses, and the like. The room is full and the walls feel as if they also breathe. People stand on couches and alongside pillars, making use of what is available to them. Around me are a familiar crowd, their chewed-up t-shirts, threadbare jorts, long, smudged lines of makeup, popped veins, and crop tops making up their own tapestry. All of these styles have embedded legacies, and they reveal an amalgamation of historically-derived and market-driven subcultures in the dim light. It becomes difficult to tell if the guy standing next to you with a stick and poke etched on his knee just graduated high school or is actually just baby-faced with a Master’s degree in engineering. Regardless, the room begins its sweaty ritual, alchemically driven by a picking bass line.

Scattered among the crowd and working the door are people involved with BRAIN Arts, the booking non-profit I’ve volunteered for since 2016. In a city that fails to adequately support its artists, BRAIN Arts and other organizations like it have become steadfast organizers of shows like this. Show Me the Body is performing their new album, Dog Whistle, tonight, alongside support bands Symbiote and Junta. In the work is a deep agita regarding the gilded injustices of New York City, the band’s hometown, and the joy of its DIY (do-it-yourself) genre-bending scenes. In hip-hop influenced hardcore, the rhythms and shouted noise of Show Me the Body capture a surveilled, over-policed, and homogenizing landscape. By extension, they capture the predicament of so many cities in the U.S. and worldwide, where financiers, corporate landlords, and developers squeeze longtime residents tighter and tighter every day.

As “Camp Orchestra” builds, the crowd shudders, off-beat and eager to find a place to move. I’m pressed against the people around me and their sudden movements knock the air out of my lungs. As Pratt snarls into the microphone, we revel in our immobility - a maelstrom that can’t stop spilling beer all over itself. Pratt’s vocals are rough and muffled, as if he were spitting out phlegm or blood, “You’re like a dog without the teeth.” It’s a reality that’s implicit in the stretched t-shirts and threadbare cutoffs, signifiers of romanticized powerlessness. The crowd finds its step, and everyone moves with urgency, as if to prove his lyrics wrong.

This is a preview of one of our feature articles, the other 86% of this is available to subscribers.