This Week in ACAB: Cop Gets Beat up at Berlin Squat; 500 Police Raid in Retaliation

Paint The Town Red Four paint jobs to inspire deviance, and let 'em know we won't go without a fight.

PRINT your REALITY takes you to the dark side of 3D. 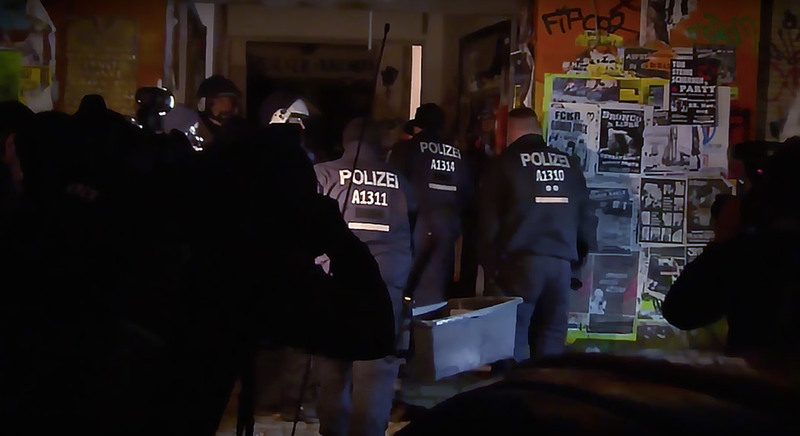 In Berlin, Germany on January 13, about 500 cops raided two buildings occupied by left-wing activists in the Friedrichshain district in an admitted show of force against the squatters. The whole thing started hours before when a police officer was approached by a masked man while writing tickets outside of the Rigaer Straße 94 squat. When the cop asked the masked man for his ID, three other people allegedly appeared, knocked him down, and proceeded to beat up the cop. The cops claim that the four vigilantes then escaped into the squat. Hundreds of police showed up at the building, stuffed activists into a van, and searched the corridors, stairwells, courtyard, and roof. Luckily, they didn’t have a search warrant so they couldn’t legally search any of the apartments, and the four people who beat up the cop earlier were already long gone. When activists in a neighboring anarcha-feminist squat, Liebig 34, began loudly playing anti-police music, cops then climbed into their building and seized their sound system. Police claimed they found dangerous objects during their search, but they just found some rocks, fire extinguishers, and caltrops. The activists released a statement and called a press conference for the next day, but the police harassment continued even during the conference.

Beginning on January 12, multiple districts in Azerbaijan erupted in protests of rising prices of food and the country’s deteriorating economic situation due to low oil prices. On January 13 in Siyazan, angry Azeris marched and blocked streets. Azerbaijan authorities declared all the protests illegal and started cracking down on them. Police shot tear gas and rubber bullets at protesters while protesters fought back with rocks. Several cops were injured and some police vehicles were damaged, but cops ended up injuring several people and arresting 55 people, including youth activist Turan Ibrahim, for "committing antisocial acts.” Similar protests reportedly also took place in the Lenkaran, Fizuli, Agdjabedi and Agsu districts. Seemingly overwhelmed by the protests, the Azerbaijan government then decided to lower taxes on essential food items in the hopes of stopping further protests.

In Peerbagh, Kashmir, the body of 22-year-old engineering student Owais Bashir Malik was found near a railway track with his throat slit on January 14. He had gone missing two days earlier after supposedly being detained by army officials. Hundreds of protesters showed up at the spot where his body was discovered and blamed the army for torturing and killing the student. The army denies the allegations. They began to block the Srinagar airport road while other protesters demonstrated near the police headquarters. Protesters chased away VIP vehicles on their way to the airport and set up numerous barricades on the road as well. Police attacked the protesters with big sticks, rubber bullets, and tear gas, but the protesters defended themselves, throwing rocks at the cops from multiple directions. Police had to go on the defensive at points as the clashes lasted for hours, leaving several cops (and an Indian journalist) were injured. The next day, cops claimed they arrested five people in connection with the murder.

In the USA, police have killed 23 people so far this month including 12-year-old Ciara Meyer in Pennsylvania, who cops shot on January 11 as they were trying to evict her family from their home.