Cameos: Kc Itohan , Hira Mahmood, and Messiah Rhodes. These three badasses are giving us the lowdown on what they’re reading, their sartorial signatures, and their beauty regimes. 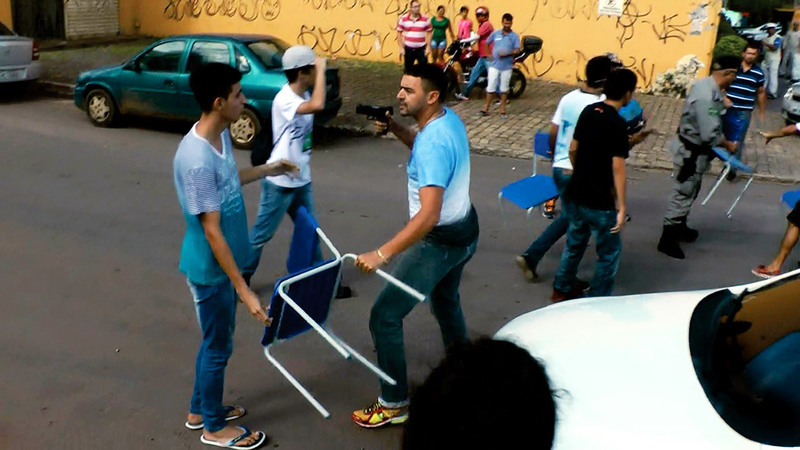 On January 3, one day after the Zapatista National Liberation Army (EZLN) celebrated their 22nd anniversary, 12 members of the EZLN’s The Other Campaign were bagged by police in Morelos, Mexico. The Other Campaign is a group of EZLN supporters who aim to build connections between the EZLN and grassroots groups across Mexico in order to fight neoliberalism. The 12 EZLN supporters were stopped by soldiers at a checkpoint who insisted on conducting a “routine” search. The 12 people called their comrades for support while the soldiers called for police backup. The police then violently arrested the 12 Other Campaign members, paraded them through nearby communities, and detained them in the town of Jojutla. Three of the arrested were minors and were soon released, but the other nine remain locked up. The Other Campaign claims that this incident is one of many instances of Mexico security forces harassing them.

High school students in Goiás, Brazil have been occupying their schools since December in protest against the privatization of education.

On January 4, students held a march, which was going smoothly until police arrived to break it up. Police began punching and pushing students to prevent them from entering certain streets, and one cop was caught on camera pointing his gun at a student’s face.

On January 8, thousands of people in São Paulo, Rio de Janeiro and Belo Horizonte hit the streets to protest increases in public transportation fares. As always, cops soon attacked the protesters. In São Paulo, police beat protesters, shot tear gas and rubber bullets at them, and even pointed their guns in protesters’ faces. Luckily, the Black Bloc was present and protesters fought back, throwing rocks and bottles at cops, destroying buses, lighting barricades ablaze, and ransacking banks. At least 17 protesters were arrested in São Paulo, and three cops were injured. And after protesting against the fare hike, large groups of students then hopped the subway turnstiles. In Rio, police also attacked protesters. In one of the neighborhoods most affected by the upcoming Olympics, police rode in on horses, trampled protesters, detained minors, and shot tear gas and flash bang grenades at people.

In La Plata, Argentina on January 8, workers protested the firing of thousands of public sector workers by newly elected right-wing President Mauricio Macri and the right-wing mayor Julio Garro. As the workers marched toward City Hall, police shot tear gas and rubber bullets directly at the protesters, injuring many. Afterwards, the mayor went on Twitter, posted photos of protesters throwing rocks at cops, and blamed the protesters for the cops’ actions.

Turkey’s police have continued killing people in Kurdistan this week.

On January 3 in Sur, police in a tank shot a projectile into the second floor of a building that decapitated 38-year-old Melek Alpaydın in front of her three children. In response, neighbors attacked police vehicles that tried to enter the area.

On January 8 in Sur, 17-year-old Rozerin Çukur was shot in the head by cops as she was walking near Süleyman Nazif Primary School. Many others have been killed in Turkey’s ongoing campaign against the Kurds including two brothers in Cizre who were shot and killed on their way to get water from a neighbor. January 5 also marked what would have been the 17th birthday of Berkin Elvan, who was killed by cops during the Gezi park protests in 2013 while he was on his way to buy bread.

So far, 13 people have been killed by the USA’s police in 2016, including 30-year-old Joshua Adam Sisson in San Diego. The cop who shot him, Officer Richard Butera, has also been involved in two other deadly police shootings.