This Week in #ACAB: Lots of Racism

Jeanne Added’s new album, Be Sensational, is idealistic without being pedantic, give-no-fucks and still gracious.

Children of migrants speak out about growing up in multiple worlds, across demands to assimilate and keep family heritage alive. 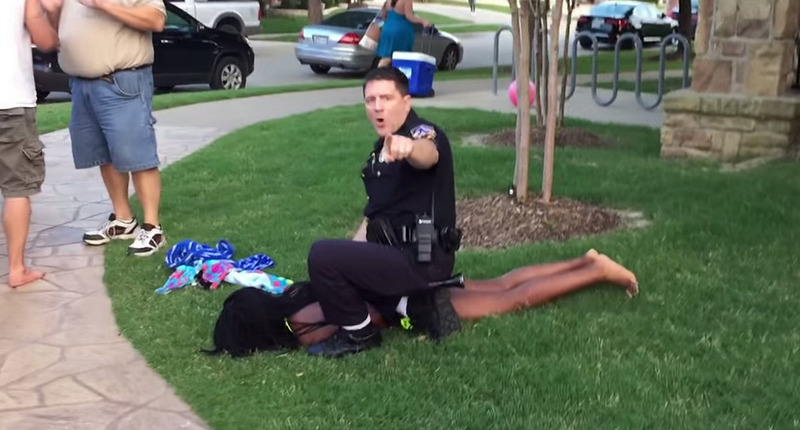 The number of people killed by police in 2015 hit 500 this week, but it wasn’t their record of murder that put cops in the news recently.

Surprisingly, some of the police stories getting the most coverage this week really aren’t as bloody as usual. But unsurprisingly, they’re pretty damn racist.

On Friday, June 5, (now former) Officer Eric Casebolt of McKinney, Texas barrel rolled into all of our lives as he was caught on a now-infamous video grabbing a 15-year-old girl in a bikini, throwing her to the ground, and then pulling his gun on two teenage boys who came to the aid of their friend. The teens had been throwing an end-of-the-school-year pool party at a community pool when some local snitches called the cops and complained about a fight that had occurred as well as (black) kids sneaking into the community pool without guest passes. Once the video went viral, outrage ensued and protests were called. Hundreds of people marched from a local school to the Craig Ranch community pool. The mayor of McKinney and their chief of police both denounced Casebolt’s behavior, and soon, Casebolt resigned. Some activist groups are now looking to get him charged with assault.

The New York City Council passed the “Ban the box” bill on Wednesday making it more difficult for employers to refuse to hire someone simply because they’ve been convicted of a crime. This should be good news for NYPD Commissioner Bill Bratton. According to him, the NYPD has been having a hard time recruiting black officers since “so many of them have spent time in jail.” But Bratton doesn’t think racist policing practices like Stop-And-Frisk or Broken Windows policing have anything to do with that. After demanding a retraction from the Guardian for making that connection, NYC’s top pig insisted that Stop-And-Frisk searches “have no impact in terms of the screening process [the NYPD does] on hiring.” But really, it’s hard to be mad at people not signing up to become cops. If only we could find out how to make less white people join the NYPD too!

Along with these instances of non-lethal systemic racism, America’s police have continued to kill people. On June 11, Miami pigs shot Fritz Severe, a 47-year-old homeless man, in a park in front of kids for supposedly threatening them with a pipe. The NYPD tased 51-year-old Mario Ocasio to death on Monday, claimed that he was armed with scissors, erased the video his girlfriend took of the murder, and then later admitted that Ocasio had actually been unarmed. And these are only two of the many lives police have taken recently and will likely continue to take. Fuck the police.