How Can You Be a Country?

Prepare to Be Ruined Becca Schuh on books that helped her contextualize social experience. 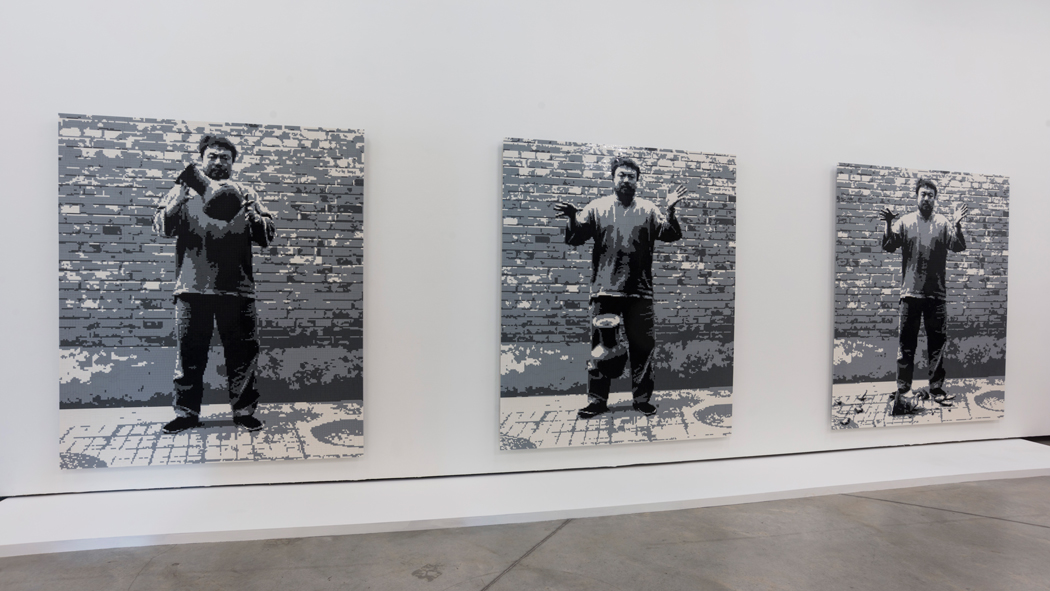 How Can You Be a Country?

Ai Weiwei’s first South American retrospective suggests that we embrace our painful histories and repurpose them for change.

I visited “Inoculación,” Ai Weiwei’s first retrospective exhibition in Latin America, in December of 2017. Later, perusing the Internet for criticism of the show, a headline caught my eye: a review published in the independent uruguayan newspaper La Diaria titled ¡Ay, Weiwei! In Spanish, ay is a sigh or a yelp, an expression of disillusionment or expectant hope. Ay is what we exhale, defeated by pain or pleasure, when threading words into proper sentences feels impossibly laborious. Like this emblematically Hispanic interjection, Ai’s work is defined by contradiction. In one gallery of his exhibition at the Fundación Proa in my native city of Buenos Aires, we can see the photographic record of a performance in which he destroys a priceless Han dynasty vase; in another, shielded by protective glass, his sumptuous casting of objects in Chinese jade. These gestures, incompatible but coexisting within Ai’s practice, illustrate the artist’s complex relationship to his country – an inner conflict that at once stifles and nurtures him, and one that many Latin Americans, including myself, will find familiar.

At first glance, the intent of the show seems purely retrospective: a selection of Ai’s most representative work cherry-picked for a new audience. Displaying the artist’s seminal pieces is prioritized at the expense of showing them in their entirety, and so several works appear in abridged versions (such as He Xie, the sculptural mountain of ceramic crabs that commemorates a feast following the destruction of his Shanghai studio by the Chinese government, one he could not attend due to house arrest). Beneath the biographical wall texts and didactic labels, however, flows a subversive undercurrent. The seeds for “Inoculación” were first planted in 2010, when the exhibition’s curator, Marcello Dantas, identified in Ai’s practice a successful model of art and activism that could be translated to Latin America (a place that, Dantas writes in the exhibition, “roars for social change.”)

The belief that art is a tool of mobilization and advocacy has been a longstanding feature of the Latin American cultural canon, yielding artist collectives such as CADA (Colectivo Acciones de Arte) in Chile and “Tucumán arde” in Argentina as well as iconic figures like the Brazilian conceptualist Cildo Meireles.Still, Dantas’s mission to bring Ai’s approach to Argentina and later to Chile and Brazil as part of the exhibition’s traveling tour struck me as monumental. I recognize in Ai’s work a willingness to face the real and nuanced feelings that define cultural identity. At a time of extreme binaries in both art and activism, Ai’s work represents the opposite of nationalist sentiment, a desire to dive instead into the murkier, less cohesive waters of our collective cultural reality. 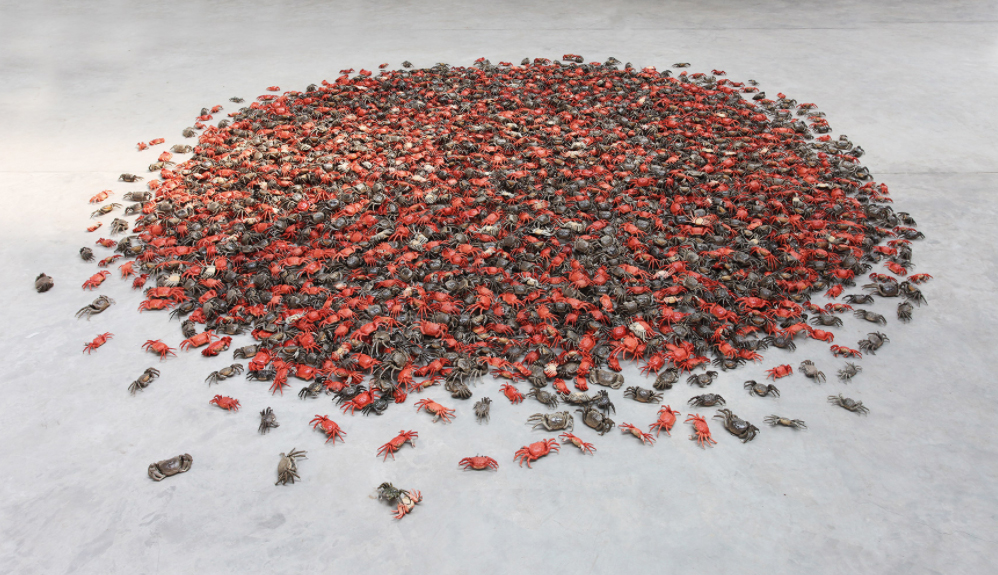 Around the time of corralito – a sinister term meaning little corral used to describe the restrictive economic policies that followed the 2001 recession in Argentina – my mother, who worked for a national newspaper stumbling from instability, was offered a secure job in the United States. We left Buenos Aires and settled permanently in Miami, while my father and the rest of my extended family stayed behind. Growing up in the US, I would often spend months at a time in Argentina, and living in Miami felt more like a transitory phase than a putting down of roots. While my Spanish stayed razor-sharp, my cultural identity was as fluid and formless as an amoeba. I resented the rampant political corruption of my native country but thought no better of the nation that had welcomed me into its pudgy, soda-drinking, rifle-wielding arms. I existed in a cultural limbo, both resisting and vying for a sense of belonging.

Unlike my chosen life in New York, Ai’s current reality in Berlin is one of political exile. Repulsed by the death toll of the 2008 Sichuan earthquake, he condemned the Chinese government, specifically denouncing its implication in the loss of student lives due to poorly constructed school buildings. His defiance earned him beatings, 81 days in jail, and a travel ban that lasted until 2015, when he regained his passport and was able to settle in Germany. I have never known the claustrophobic loneliness of being a prisoner in my own country nor the remote surreality of exile, but there is an emotion Ai and I both share: the very specific, complicated love one feels toward a country they can no longer call home.

Ai Weiwei’s Forever Bicycles, a dizzying, monumental sculpture made of 1,254 repurposed bicycles, towers in front of the Fundación Proa’s glass facade in the historic neighborhood of La Boca, where it can be seen by visitors to the museum and passers-by alike. The Proa building sits on the corner of Avenida Pedro de Mendoza and Caminito, the latter being the beloved pedestrian alley on every postcard of Buenos Aires. The story of Caminito is linked to the the Argentine port painter and boquense (La Boca native) Benito Quinquela Martín, who in the 1950s converted what used to be an abandoned railroad into the multicolored street, baptizing it Caminito after the tango of the same name. Quinquela Martín led the urban development of his impoverished neighborhood: he nearly went bankrupt founding a central public school for a thousand neighborhood children, who had until then squeezed into small and infrastructurally unfit buildings, among other contributions.

Separated by history, Ai and Quinquela Martín now find themselves neighbors in La Boca, two renowned artists whose lives in their native countries began coldly and roughly. As a child, Ai watched his father clean public toilets in Xinjiang, punished by the regime; Quinquela  Quinquela Martín was abandoned at an orphanage and forced to work as an infant, dragging bags of coal to and from  the port. Important differences aside – the Argentine painter was venerated by his country, whereas Ai was oppressed and rejected by his –  both artists remained inextricably tied to their cultures, engaging with local artisans, finding inspiration in folklore, and fiercely advocating for the human rights of their fellow citizens. 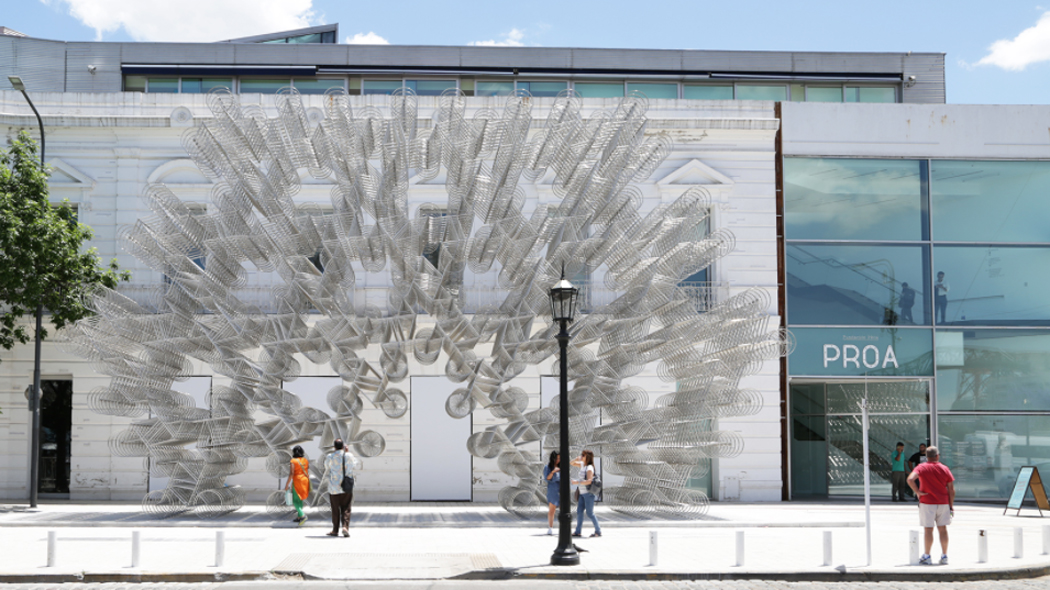 In an interview with The Guardian last year, Ai affirmed his stance on China with his usual frankness. (“No freedom of speech, no independent judicial system. If those don’t exist...how can you be a country?”) In the same piece, he recognizes that these struggles were at least in part responsible for his decision to become an artist. And this duality is perhaps no better epitomized than by the life of Ai Qing, Ai’s father, who spent years writing communist poetry only to be brutally punished and shunned by Mao’s regime. Ai’s trip to Argentina in 2017 to plan the exhibition at Proa represented his first visit to South America. For us, mestizos in a land historically defined by tension, Ai’s presence symbolizes the arrival of a voice that does not deny the fraught nature of identity, suggesting instead that we embrace our painful histories and repurpose them for change. 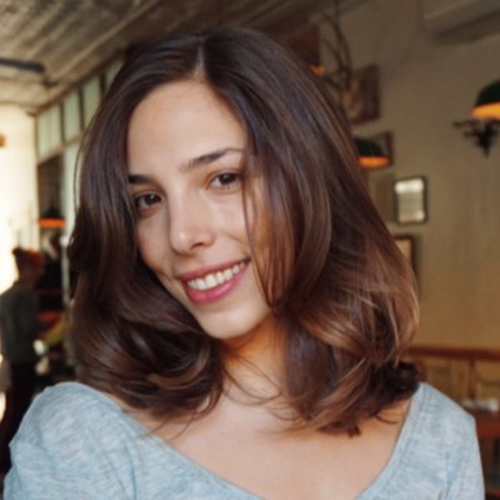 Valentina Di Liscia writes and translates from Brooklyn, New York. She thinks about Latin American conceptual art and the intersections of art history and translation. If she could have dinner with anyone, it would probably be Luis Camnitzer, of whom she considers herself a disciple.