MY VIRTUAL PUSSY, MY ARTIFICIAL LUNGS

The Camp Witch Aimée Lutkin recalls the humiliation of being called a creep by her adult hero at summer camp. 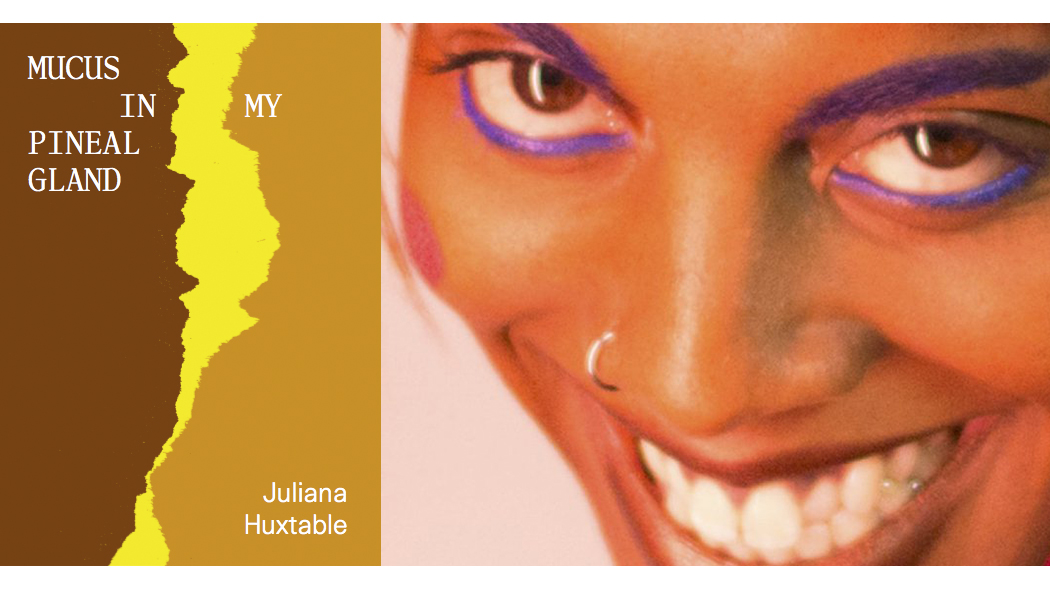 MY VIRTUAL PUSSY, MY ARTIFICIAL LUNGS

Something feels wrong about calling Juliana Huxtable’s new book a “poetry collection.” Huxtable’s poems feel more like Tumblr posts whose maneuvering of space, time, and genre is downright masterly. Straddling narrative poetry, speculative fiction, and archival document, Mucus in my Pineal Gland doesn’t present itself as a series of cohesive object-ideas (i.e. “poems”), but rather, as a colloquium of our voices, connected online.

While there are the occasional moments of lineated lyric verse, MIMPG announces itself as striving for a “VISUAL LANGUAGE CASTRATED OF ITS GRAMMATICAL STRUCTURE.” The majority of the text is in all-caps, with section titles like “DIVINE BITCHES” made up of prose blocks that extend for pages on end. Huxtable’s loose and copious syntax and morphing typographical landscape serve as the engines by which body and text – text and body – become interchangeable with one another.

Like the parts of the body, syntactical grammar relies on a “STRUCTURE WITHIN WHICH ITS MEANING RESIDES.” Flesh is the threshold that speaks and that is called upon whenever you refer yourself to me, or I to you. Throughout MIMPG, Huxtable maps the body’s planes and passageways, while at the same time drafting a map of what it means to make physical  contact with someone else, or to hide from that contact. “IT’S PINK INSIDE THE BLACKEST STRETCH / OF FLESHTONE PLANES WHERE GOOSEBUMPS / TAKE PERMANENT RESIDENCE BETWEEN RIDGES / THAT HIDE THE MOON,” she writes in the poem, “MORNING LIGHT ON MY SKIN.” With keen awareness of the body’s physicality, Huxtable deconstructs the experience of embodiment down into tones, textures, and landscape. The book’s deconstructive impulse may be the reason why MIMPG seems full of maxim-like wisdom: “THE AGENCY ONE HAS IS TO PLAY IN THE REFLECTIONS.” You can’t help how other people perceive you or your body, but you can play in the spotlight.

I feel a pang of recognition when Huxtable says,  “I THOUGHT I WAS DEEP IN BUT THE WHOLE TIME IVE BEEN CAUGHT / IN MY OWN REFLECTION ON THE RESTLESS SURFACE.” It feels like the surface always keeps on changing. Transition is mourning and mourning transition. Recently I learned that the mirrors affixed to 17th century West African religious sculptures symbolized the ability to see into the spirit world. Looking on apprehensively, Portuguese colonists referred to the religious practices they observed as ‘fetishism,’ the word ‘fetish’ pointing to sorcery, or describing an object made by art. Perhaps the colonists’ horror was caused, not by the presence of extraordinary ability, but by the threat of transparency, the assault of seeing oneself clearly and of being seen by others.

Whose eyes perform this assault? What happens when they perform it? Throughout MIMPG, the speaker evades the gaze of “HOLY SCRUTINY.” In “#AIMNOSTALGIA,” for example, Huxtable describes the “OMNIPRESENT PROBE OF GOVERNMENTAL OBSESSION” as mirrored by “THE COLLECTIVE OBSESSION OVER CHILD ACTOR’S DICK PICS.” Elsewhere, figures in Huxtable’s poems fight to avoid contact (penetration) or, alternatively, to become “finally plugged” (“PLUGGED”) To be seen is to be penetrated. To be loved is to be seen. Huxtable’s poems cry out for a world in which the boundaries of social constructs of identity play out like a song. They ask us to reconsider how we circumscribe the limits of the body. At the same time, they are filled with moments of fear, moments where physical contact is evaded, as when one of Huxtable’s speakers lies beside her lover and tries to decide whether she’ll “LET HIM GET A SENSE OF THE REAL.” The descent into the speaker’s reality at that moment in the text, marks a point after which nothing can be the same. But the real is also always arriving, whether we would like it to or not. “Never break the shape,” says Perfume Genius. Living through an image, one is fixed.

In our current time when tech upgrades happen continually and visibly, technology often gets equated with flexibility – the ability to move, seek, and transform – but technology’s role as Huxtable imagines it in  MIMPG is to establish static identities. Huxtable describes this as an ever-receding horizon we can never quite get to, reaching instead “THE LIMITS OF THE LOOK,” as we continue to search for “PRIMAL SELF-RECOGNITION.” Whenever I’m stuck in the Internet’s world of mirrors, I find its envelopment to be both safe and suffocating. When I’m online, like Huxtable’s speaker, I am always under multiple forms of  scrutiny. I am contacted, followed, seen. Yet each time I like, share, retweet and reblog my fetish objects of choice, I immediately feel more solid, like I’ve satisfied  some need I have to feel full. Engaged in the ongoing process of becoming physical, solidifying what in the minds of many becomes the one, I copy the fetish object over and over, with slight variations each time. In front of my screen, I gain the ability, as an alchemist does, to transform one substance (myself) into another, more ostensibly valuable substance. 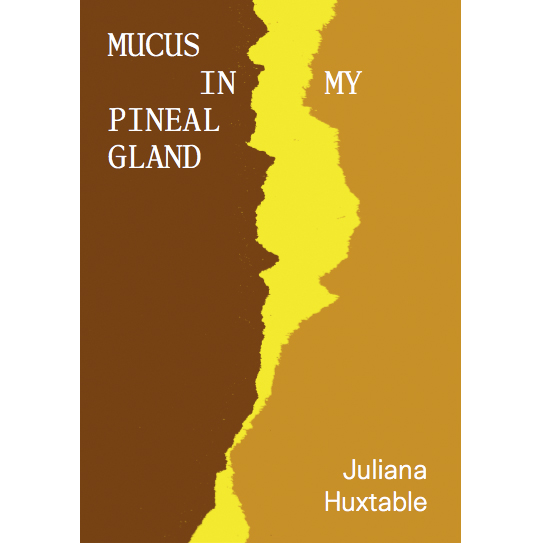 Offline and in tandem, Huxtable describes the alchemical process by which clothing comes to function as an extension of flesh, as in the poem “HOOD BY AIR.” Later in the book, when the speaker “SPLITS TIME BETWEEN INDUSTRIAL WORKERWEAR, DISCOUNTED ‘URBANWEAR’ AS OUTERWEAR AND SECOND-HAND MILITARY SHOES AT THE SAME DAMN TIME,” the changes in her clothing can be said to mark changes in the way she will be evaluated by others. In our daily lives, this evaluative process has replaced what someone might once have called intimacy, or even love.

“I WAS ALWAYS TURNED ON BY PRIVACY,” says Huxtable, casting this desire into an immobile past. These memories of private arousal, whether they exemplify real privacy or merely the idea, turn us onto a need for the public, to be seen by them. “LIVE FEEDS OF MYSELF TO 600 MASTURBATING MEN IN BUSH’S AMERICA.” The gaze of the lovers-who-watch is the mirror in which our identities are shown. This mirror rarely functions the way we’d like it to. As such, we can be drawn to sex for the sadness it creates in us. Describing a heavy sexual encounter, Huxtable’s speaker sings, “I CRIED AS MANY TIMES AS I CAME, / I CRIED AS MANY TIME AS I CAME.” I like the music in these lines – the way they revel in the lyric, transforming ambivalent overtones of fucking into a fluid song, which is then repeated and reverberated across peoples and time. 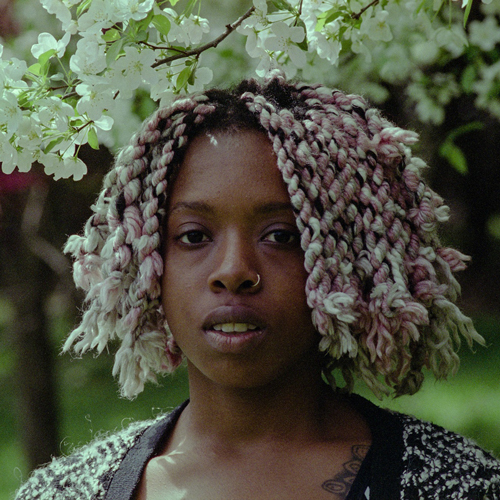 Anaïs Duplan is a poet, artist, curator, and author of Take This Stallion (Brooklyn Arts Press, 2016) and Mount Carmel and the Blood of Parnassus (Monster House Press, 2017).