The current war between community and developers is like another Bronx is Burning. Effective collective action abounds on the front lines of gentrification in the Northern borough. 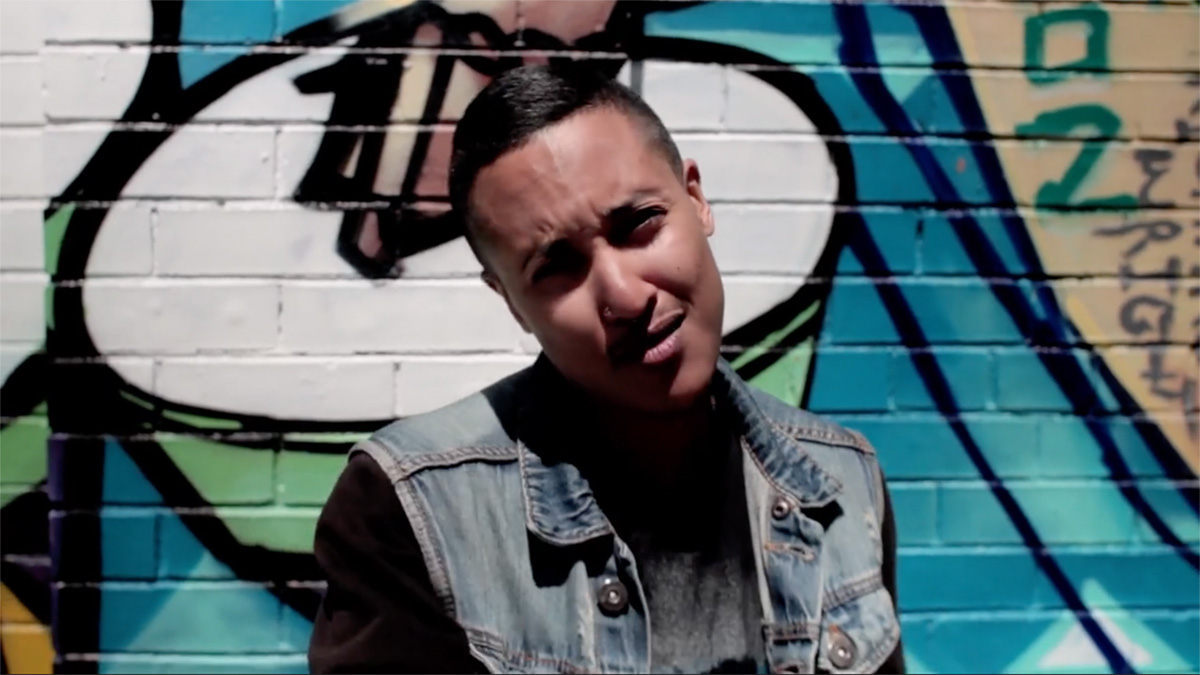 What happens the morning after the house party? In Micah’s new music video for “Sucka Free,” you get a tour of Oakland’s radical history of resistance and Black Power, naturally. We’re proud to premiere the video – check it out, along with our interview with Micah, below.

As the resident rapper/mc of queer art collective KUNQ, and one of its founders, it comes as no surprise that Micah’s music has both a political and contemporary club edge. “Sucka Free” is off of his third EP Mercury, which features his boldest work yet. With lyrics that draw on and reframe the everyday and familiar – just wait til you see him rap “you say you hate me but I know that you’re in love with me” – Micah is making music to give listeners the sustenance to fight and flourish another day.

How did you get your start in music?

Since I was a toddler, hip hop was always sacred to me. I would steal my brothers MC Hammer tapes and rap the songs back to him. I started to put my poetry to beats in 10th grade, hanging a microphone from the ceiling and recording into Fruity Loops. As I grew older, my sound became more complex, influenced heavily by Mos Def, Common and Kanye West. Their intricate, political wordplay inspired me to write songs like American Dream, a take down of the Bush administration. In college, I was part of an independent record label, Base Trip Records, and performed at venues, house parties, and non-profit functions all over Boston. I learned a lot about the industry and shared stages with artists like Dead Prez and Blu, but as my politics radicalized and I explored my gender, I grew tired of the misogynistic, dude bro scene. After college, I split with the record label and linked up with a few friends to form our own collective, KUNQ, which actively encouraged me to flourish as an artist entirely on my own terms.

What’s your relationship to KUNQ; how did that come about? What’s it like being the only MC in the group?

KUNQ, a collective that started in Boston, grew out of a frustration with the lack of resources for queer nightlife artists in the area. I met Rizzla & Battyjack after performing at their bi-monthly night, Nu Life. They had created a space for the most marginalized of the marginalized - those of us constantly side-lined by the white homonormative gay and lesbian spaces - and every other Tuesday night, it was LIT. I even go-go danced for the function a few times. As we became closer friends, we decided to channel the feeling of those nights into a creative, multi-media collective. It became our survival mechanism in a city determined to erase our stories and silence our expressions.

Being an MC in a group full of DJ’s has it’s challenges, but more than anything, it gives me a unique perspective on production, especially surrounded by artists like FALSE WITNESS, SHYBOI, KILBOURNE, STUD1NT and FXWRK, who continuously put out bangin tracks and keep me on my toes. Last summer, we collaborated on a live metaphysical remix of D’hana’s (Battyjack) LOOSE, a multi-media installation about the intersections of gender identity and race. My set was improvised and intermittently weaved throughout the night, highlighting the unrestrained themes in the central piece. We trust each others’ instincts and craftsmanship, which allowed our individual works to flow together effortlessly.

Your first two EPs are a lot about exploring identity, finding your place. There’s such a strong sense of self-assurance and acceptance this time around, lyrically and in your delivery. What brought about that shift?

I spent the majority of my twenties being unable to stand in one place for too long. This restlessness brought me from Boston, to NY, to Oakland and finally back to NY, and saw me through 5 years of physical transition while taking Hormone Replacement Therapy. Those first two albums came about as a way to explore & expand not just my personal identities, but also my musical skills. Mercury became the culmination of those efforts, reflecting my immense growth of the last few years. It’s a trip to go through twenty something years of never feeling fully like yourself, and, in so many ways, this project felt like the solidifying of my spirit.

What was the production process like for this EP?

The creation of the EP coincided with the creation of my own recording studio, Out of Body Studios. I had spent countless hours recording with bro’s who fucked up my pronouns or EQ-ed my voice too high, and the finished tracks never came out like I wanted them to. So, I created a space where queer folks, especially QPOC, can feel supported and respected when making their art. I believe in cooperative economics to help our communities thrive, and I learned so much through that process. It’s beautiful seeing my people feel themselves and their art, and I feel honored to help facilitate pushing their stories into the world.

The studio became a huge influence on the project, as well as the works my collective was churning out. I wanted to create something cohesive with the KUNQ sound, but completely my own. I was used to working with slow, classic hip hop BPMs, but my team pushed me to play with tempo, and it opened up a lot more possibilities for my creativity. I always wanted to style myself as a queer, club version of Mos Def and this EP was my attempt at that.

What was your life like when you were making the EP?

2014 and 2015 were intense years for me, especially around the time I made this EP. I had just gotten out of an abusive relationship, and took huge steps to assert myself and my independence. By the end of 2014, I was heavily involved in Oakland’s Black Lives Matter movement. Those were endless nights filled with highway shutdowns, armies of cops, and helicopters hovering over us while we took the streets, pissing off white folks with Black Brunch and successfully shutting down the Oakland Police Department. It was one of the most emotional times in my life, and I wanted those feelings to come across with Mercury - paranoia, anger, hope and righteous resistance.

I wrote "Sucka Free" to address the communal resilience I was seeing every day. I brought on my good friend and fellow activist, Jova Lynne, to direct the video. It was important for me to work with a black, femme-identified artist on this project. We were both involved in the various actions popping off around the Bay at the time, and wanted to channel our experiences into a tribute to Black Power and Oakland’s deep history of protest and systemic disruption. The song is not only dedicated to the victims of police brutality, but also to the growing number of transwomen of color we lose every year to transmisogyny.

What’s it like trying to make it as an MC/rapper today? How do you measure your own success?

As cliche as it sounds, I find success in using my words to impact someone’s life. I have been fortunate enough to perform many times in front of rooms full of beautiful queer and trans folks who tell me how my music has helped them accept and love who they are. As a trans person of color navigating a cisgender white world, it’s important for me to be open about who I am and how I move about the world. Of course, visibility isn’t enough, and I want to continue my social justice work through music. I’m starting a monthly QPOC rap cipher to foster more hip hop centered around Trans, GNC and Femme lives. As queer and trans folks, it’s been difficult to navigate our love for a culture that at best, doesn’t want to talk about us, and at worst, wants to destroy us. But, we need to reclaim our space because we’ve always been here.

Keep up with Micah's upcoming projects!

Sucka Free Video Production Credits
Directed by Jova Lynne
Edited and Shoot by Jova Lynne and Ben Leon
Jova is a video artist based out of Detroit - jovalynne.com
Ben is based out of Oakland CA - benleonfilms.com