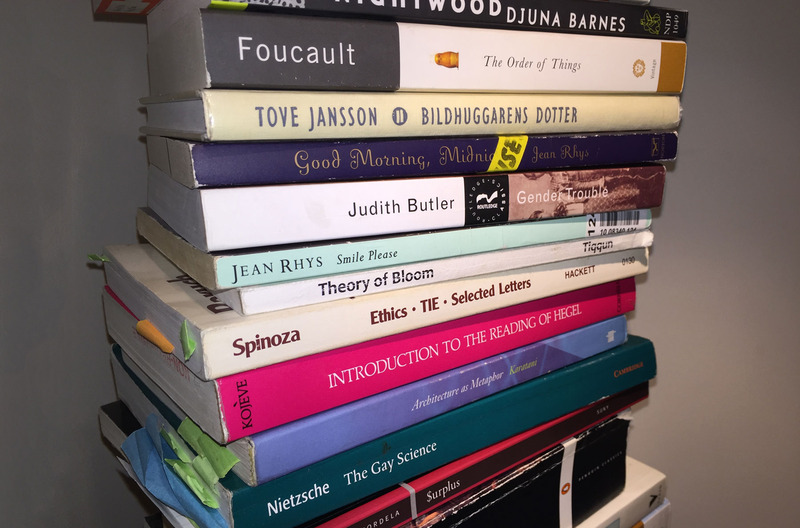 Ten years ago, my sister inspired me to buy a reading journal. The reading journal was a simple notebook with a hard cover, each page giving space to record two books: Author, Title, Date, and Notes. I often left the notes section blank, but I never left any book out, even if I disliked it. Record everything. I stopped using it in 2011, but I still pack it and bring it with me every time I move.

Most entries are from the fall, and most of them I never refer to or even remember having read. Whatever notes I jotted down are embarrassingly naive. The few that stand out I don’t need a journal to remember because I think and talk about them often.

When I moved to Norway at the age of 17, I had to start using the little amount of English I had learned up until then. Turns out, existing in a different language means you kind of have to become a new person, you can't just translate your old self. The books I read gave me a new vocabulary.

During my first year of high school in Norway, I read Tove Jansson’s biography Bildhuggarens dotter, Mark Haddon’s The Curious Incident of the Dog in the Night-Time, Extremely Loud and Incredibly Close by Jonathan Safran Foe, and The Catcher in the Rye by J.D. Salinger. It was the first time it felt OK to write in a childish way from an adult’s perspective. These books gave me permission to write about things I knew I would one day find embarrassing. They taught me how to play with English using wacky turns of phrase and misusing words to comical effect.

One fall I read Samuel Beckett, Dario Fo, and Albert Camus. I was amazed by how much they could produce with such minimal language.

One very influential book I read after high school was The Golden Notebook by Doris Lessing, which I recently started reading again. One passage stuck with me for years, not because it’s the best, but because of how it spoke to me at that time.

She would sit on the floor of the big room, surrounded by half a dozen daily newspapers, a dozen weekly journals, reading them, slowly, over and over again. She was trying to fit things together. Whereas, before, her reading had been to form a picture of what was taking place all over the world, now a form of order familiar to her had disappeared. It seemed as if her mind had become an area of differing balances, she was balancing facts, events, against each other. It was not a question of a sequence of events, with their probable consequences. It was as if she, Anna, were a central point of awareness, being attacked by a million uncoordinated facts, and the central point would disappear if she proved unable to weigh and balance the facts, take them all into account.

It occurred to her that she was going mad. This was “the breakdown” she had foreseen; the “cracking-up.” Yet it did not seem to her that she was even slightly mad; but rather that people who were not as obsessed as she was with the inchoate world mirrored in the newspapers were all out of touch with an awful necessity. Yet she knew she was mad.
— Doris Lessing, The Golden Notebook

Reading this book made me realize that obsessively trying to understand the world would not lead to some grand realization. The urge to understand politics didn’t have an answer in politics, but in something more personal. Also, that personal distress is political, that mental breakdown is intimately tied to sociology, to gender, to economics. I learned that there is no point trying to make sense of the world nor in becoming a more sanitized version of myself. Permitting disorder was the sanest way to be in this world. It provided a kind of opening.

Later I discovered Jean Rhys and her partly autobiographical novel Good Morning, Midnight. Jean Rhys, a largely misunderstood writer for the majority of her career, whose life as a demimondaine made her an unfit feminist icon at the time. She lived a messy life with alcoholism, prostitution, and a long series of men. Good Morning, Midnight is so mundane in a way, but it conveys the tortured experience of feeling trapped inside hotel rooms and haunted by anxiety out on the streets.

My life, which seems so simple and monotonous, is really a complicated affair of cafés where they like me and cafés where they don’t, streets that are friendly, streets that aren’t, rooms where I might be happy, rooms where I shall never be, looking-glasses I look nice in, looking-glasses I don’t, dresses that will be lucky, dresses that won’t, and so on.”

One of my last fiction obsessions before delving into theory and philosophy for a few years was with Franz Kafka. I remember so clearly sitting in a classroom, listening to one of my peers reading Kafka’s short story The Great Wall of China, and somehow I start to have a panic attack. It sounds ridiculous to admit it now, several years later, but it made me feel crazy – something about it was so new to me. Like many Kafka stories, it deals with the incoherence and absurdity of power: one must understand this unintelligible and arbitrary aspect of power as its defining characteristic, or go mad.

Try with all your powers to understand the orders of the leadership, but only up to a certain limit — then stop thinking about them. [...] Stop further thinking, not because it could harm you — it is not at all certain that it will harm you. [...] What will happen to you is like a river in spring. It rises, grows stronger, eats away more powerfully at the land along its banks, and still maintains its own course down to the sea and is more welcome as a fitter partner for the sea. Reflect upon the orders of the leadership as far as that. But then the river overflows its banks, loses its form and shape, slows down its forward movement, tries, contrary to its destiny, to form small seas inland, damages the fields, and yet cannot maintain its expansion long, but runs back within its banks, in fact, even dries up miserably in the hot time of year which follows. Do not reflect on the orders of the leadership to that extent.

Why did this stick with me? I have no idea. I loved Kafka, studying the geometric construction of his short stories, but he made me feel absolutely insane. In a good way, though. Before, I had seen my interest in critical theory as divorced from my political interests. I was stuck in the academy for four years as a result of my financial and legal situation, but my political interests made flirt with the idea of leaving school to, you know, be an activist, a radical. That too sounds incredibly naïve today.

Some of my activist friends were skeptical about my academic interests, but I didn’t yet have the language to tell them that wanting to read books and write isn’t “selling out”, or, that selling out isn’t that terrible, or, that terrible is OK. It has to be.

I read Nietzsche, Marx, Foucault, Freud, Lacan, Hegel, Kojève, Karatani, and Spinoza. Hardt and Negri, Deleuze and Guattari. Franco Berardi, Judith Butler, and Jack Halberstam. Althusser, Baudrillard, Barthes, and Balibar. These names filtered into my everyday speech, their theories engrained in every thought. I fell into it by accident, taking a class with the brilliant Kiarina Kordela, who to this day is my biggest brain crush and whose books I keep sending to people. I failed to follow her advice and apply to grad school, but the ideas she gave me was such a great gift.

One thing Kordela tells her students is to always quote the thinkers one draws on when writing about their ideas. When they said it better, don’t avoid quoting them because you already have too many quotes. That a proper critical theory paper should be about fifty percent quotes.

That is, we should still write, but we should always admit that we’re still learning. Aspiring to learn is not to wallow in the things we already know, but to look for the things one doesn’t yet grasp. Like Walter Benjamin implies in Unpacking My Library, your library should be full of books you haven’t yet read.

This is my second fall out of school, and even though I don’t think I want to return to the academy, there’s one thing I miss. I miss how it insisted that I learn things I’d never get around to on my own. I resisted so much of it, and struggled through the assignments that felt really hard. Outside the academy, it’s all too easy to get cosy with people who think alike, brushing off people who think differently, know more (or less) than you do. There’s no increased freedom in this, but it’s comfortable.

The thing is, we rarely choose what lives we are going to live and how we are going to think. There’s obviously nothing wrong with falling onto the path that seemingly presents itself, but for many of us that either doesn’t happen, or our options are either so depressing or limited that we settle for ‘who we ended up becoming’. When we feel altogether wrong or broken, the only solution is to fix ourselves somehow. But for the littler things, sometimes all that’s necessary is to find a way out, a different perspective on the world. We read books for pleasure, we read for inspiration, and ideas, and because good stories are nurturing. Not just books, of course. People, magazines, experiences, music, artists, movies, the internet, whatever. But we also consume these things because they provide a way out of reality. For a moment, or permanently.

This is The Contextual Issue, in which we explore books and other artifacts and people who do interesting things in the worlds of texts, theory, writing, reading. But not just that. Up already are Corina Dross’s horoscopes with an illustration by Josie Mosser. Tyler will be picking up the tabs again every week, and we’re launching a new feature on the site that we hope you’ll enjoy: a weekly lookbook of street style in different places. And much more. We’re always looking for writers (as well as feedback and correspondence) so if you’re interested in writing for us or collaborating in some way, please shoot us an email at mailroom@mask-mag.com.

What are you reading or watching or listening to this fall? Hit us up on Twitter and give us your recommendations.