Trigger Warning I don’t give a shit about gun control, just like I don’t give two shits about voting, GMOs, or recycling.

trans day of revenge With eerie timing, G.L.O.S.S. dropped their latest album dedicated to vengeance. Have a listen. 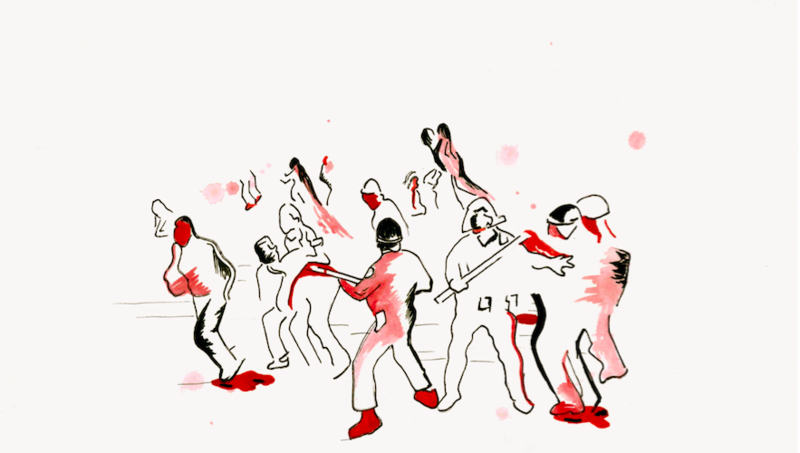 When NYPD Commissioner Bratton took the mic at Stonewall earlier this month, crowds chanted “you kill people!” The commissioner's feelings were hurt.

Pride month is meant to be a time of celebration. I can’t help but enjoy sunny days filled with queer and trans peeps loving themselves and commemorating that time in 1969 when some bad-ass queer and trans revolutionaries gave the NYPD that work for two nights straight. NYC summers are truly magical! But my heart broke when, earlier this month, Omar Mateen, a homophobic wanna-be cop in Orlando killed 49 queer Latino people who were dancing in a local nightclub. The police may have shot and killed some of the club-goers in their bumbling attempts to respond to the attack. Even worse is that this tragedy set the tone for the rest of the month and allowed cops to start acting like they are our friends, during this time of the year where we’re supposed to remember that police are the sworn enemies of queer, trans, and gender nonconforming folks. Nonetheless, like during the Stonewall Riots in 1969, groups of radical queers are again fighting back at police attempts to take their spaces from them. Here’s some stories that’ll show you what I mean.

Sylvia Rivera was a Puerto Rican and Venezuelan trans woman, a born and raised New Yorker, and a founder of the Street Transvestite Action Revolutionaries.

"We always felt that the police were the real enemy."

After the shooting in Orlando, NYC’s mayor Bill de Blasio announced that 500 more cops were being stationed at queer-friendly spaces throughout the city, including Stonewall, to supposedly protect the LGBTQ community. The media even praised the cops for “protecting” the LGBTQ community. Excuse me while I throw up. Less than a day after the massacre though, the NYPD, including cops on horseback, attacked, arrested, and injured people marching in solidarity with those lost in Orlando. Apparently, that’s called “protection” in cop-land.

The vultures came out the next night. Mayor de Blasio, Governor Andrew Cuomo, and NYPD Commissioner Bill Bratton actually had the nerve to put together their own vigil outside of Stonewall. They tried to make the event about their own agendas, but queer comrades in the crowd had no time for the nonsense. While he was speaking, de Blasio got heckled by people chanting “end police brutality!” and “bullshit!” when he claimed to support LGBTQ people. And when Bratton dared to get on the mic, the crowd loudly booed him with some chanting “you kill people!” All I could think was: where’s the lie though?

Bratton said he was surprised and hurt by the boos. Poor thing! But on June 23, he proved why he deserved them when he said that the NYPD didn’t owe any apology to the LGBTQ community for the raid that led to the Stonewall riots. But hey, after that disgusting statement, he posed next to the NYPD’s new rainbow-colored, gay-pride-themed SUV. That means it’s all good now, right?

Meanwhile, the US Department of Justice said they’ll be giving $1 million to the Florida police departments that helped respond to the Orlando shooting even though the Orlando police chief admitted that some of the victims may have been shot by cops. Ain’t that some shit?

There’s a chance for some karmic balance to be restored though since a gay man in Staten Island decided this month to sue the NYPD for $25 million after homophobic cops brutalized him in June 2015 and hurled homophobic slurs at him. Remember to always make the cops pay for their bigotry!

Outside of the USA, Turkey’s cops tried to ban the Trans Pride march in Istanbul on June 19, but Turkish trans folks were not having it. They went on the streets to march anyway, but hundreds of cops soon arrested some marchers and attacked the march with rubber bullets and tear gas. Sadly, due to a ban and threats from cops and fascists, Turkish organizers had to cancel Istanbul’s Gay Pride march scheduled for June 26.

On June 4, Chile’s cops bagged queer student Constanza Vargas who, along with her comrades, was occupying her school for free education and generally being awesome. The cops then threw her in a cell, beat her, stripped her naked, and tortured her all while spewing homophobic slurs at her. Knowing how Chilean students get down, I’m sure they’ll be seeing her masked up on the streets during the next student march.

If you’re looking for opportunities to support queers, pass the hat for Carlos aka Bayna-Kehkiem El Amin, a queer black man who is currently being held in Riker’s, his story is one of self-defense. For other opportunities, follow Black and Pink, the largest network of LGBTQ prisoners in the world.

Hope you all have a happy, riotous time this Pride month!