Putting on Google Cardboard to Watch the Revolution

Lonesome Town This is The Lonely Issue, in which we play broken telephone with our feelings

When Blood Runs Cold Surrounding yourself with people, ideas, and creative energy is one way out of the overwhelming despair. 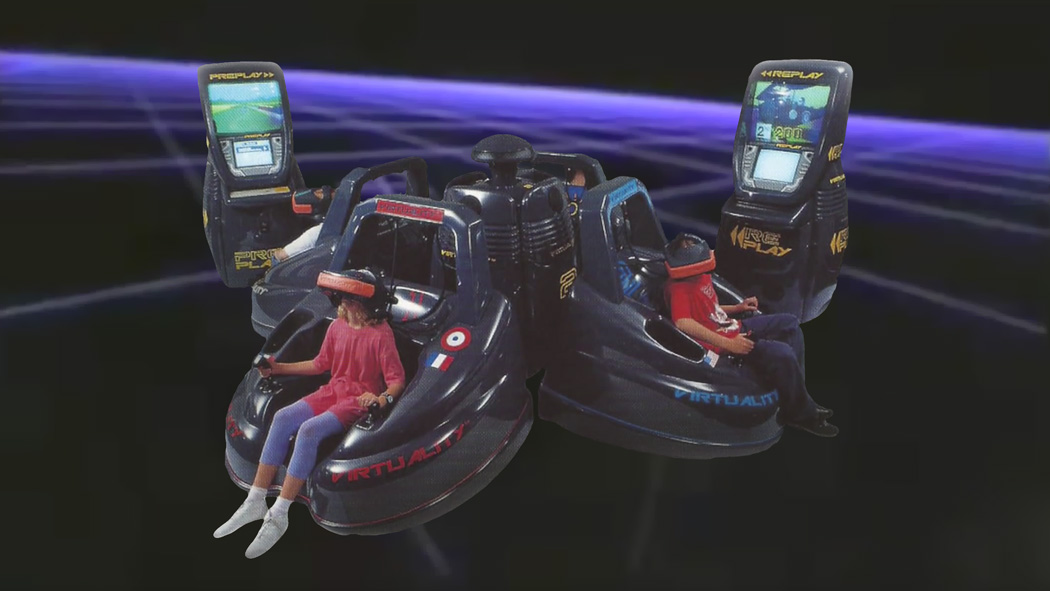 Putting on Google Cardboard to Watch the Revolution

Virtual Reality devices like Oculus Rift place you at the center of another universe. But does a 360º perspective really increase our knowledge of other worlds? Or does it simply enable our detachment and narcissim?

We all have different ways of coping. My roommate came across me blindfolded, spinning in circles.

My hands gripped to the armrests of the swivel chair, she saw me strapped into a bichromatic mask. I wore over-the-ear headphones. I didn’t know she was in the room. She saw my lips purse for a moment, then rest in a half-frown, reacting to whatever was happening within the opaque black-and-white plastic apparatus covering my eyes.

Fade to black. I take off the goggles, and I squint against the sharp detail of reality. I hear her laughing, and I spin to the source. She’s excited. She tells me she’s going to DC to protest. She wants to make signs. Can I help? And then she asks me what I’m doing.

Can we the trace a straight path of progress in the history of virtual reality? It seems it is more accurate to view it as an assemblage of failed patents, secret projects, dystopian sci-fi and utopian dreams that eventually, perhaps inevitably, found its way to reality.

The headset I was using can be traced to a military experiment in the 1980s. Thomas Furness of the US Air Force was working on phase two of his flight/fighter jet simulator. He tinkered with his model, increasing the graphic quality and, most importantly, increasing response time to head rotation, since a lag in time would make the pilot sick. It used a HMD (head-mounted device), with the image feed responding to head movements and control inputs to give a sense of immersion. No one claimed it was the same as clocking air time, but the idea is that it would eventually be faster and cheaper to train on. He called it the “Super Cockpit.”

This was just the first practical implementation. Furness had already been working on the project for two decades. Simultaneous to this there were civilian mad science types, psychonauts huffing video reels through metal-and-glass apparatuses in the depths of their labs. It was the 1960s, and people wanted to transform their sense-experiences. Like the “Super Cockpit,” they shared a penchant for showy names. There was the 1962 “Sensorama,” made by cinematographer-turned-inventor Morton Heilig, who intended to invent a device to usher in the multimodal cinema of the future. It was a sort of arcade-style box with a screen that also moved and dispensed smells. (It ended up as more of a novelty.) In 1968 the “The Sword of Damocles” debuted, a project by Ivan Sutherland at MIT. It was probably the first to use a head-mounted device, with sensors both bulky and precariously calibrated. It looked like a futuristic update on the myth it was named after, and most likely felt just as perilous, due to the out-of-sync reactions of the device. 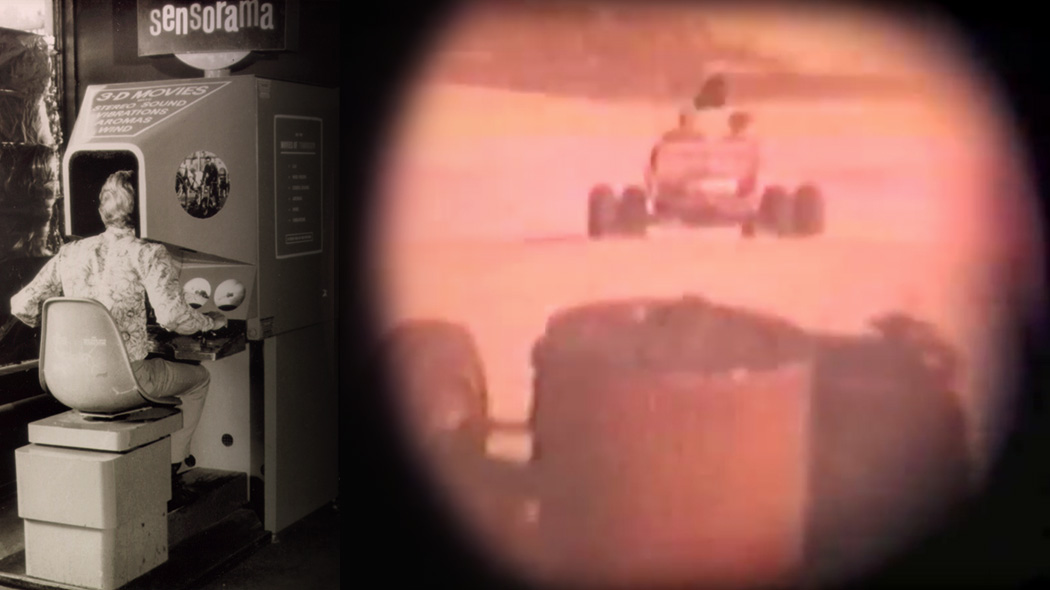 The Sensorama, invented in 1962 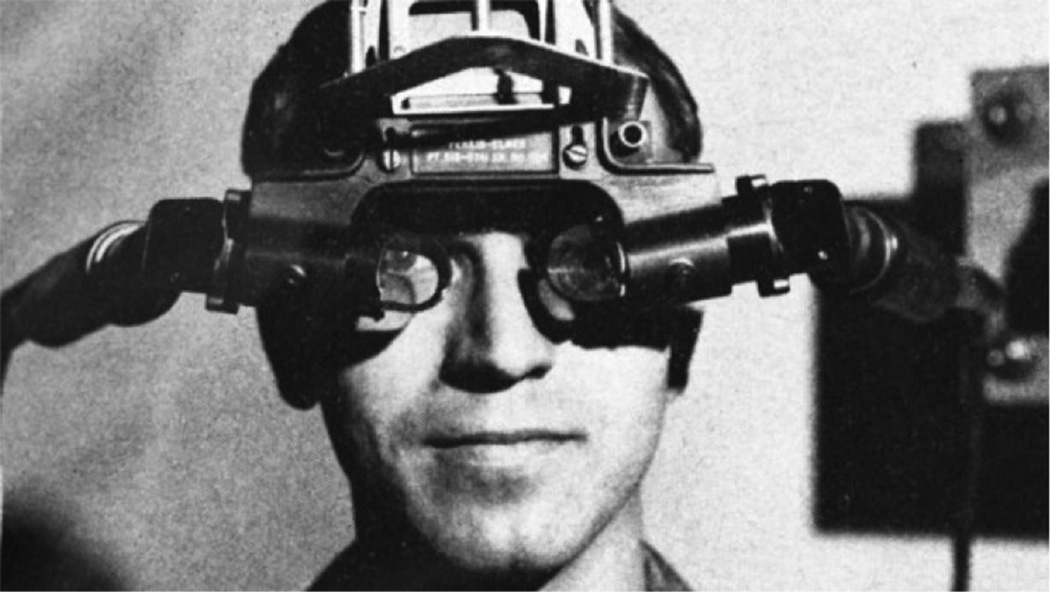 The Sword of Damocles, debuted in 1968

Whether you’re watching a film in a theater, a movie from your couch, or a Snap on your phone in your bed, the relationship between you and your screen remain remarkably stable. The phone’s portability has changed the number of venues in which you could experience images, but in all cases, you and your screen both need to stay fairly still and aligned for optimal use. The early attempts at VR such as Sword of Damocles and Super Cockpit changed the relationship between the viewer and the screen by mounting the screen to the head and tracking head or eye movements. Although the perceptual relationship between the eyes and the apparatus remained stable, the passive viewer became an active user. Body, movement, and vision all become relative to one another, which is, on a most basic level, how we perceive a space when we move our eyes and head to ‘look around.’ This is first-person perspective. Traditional film and photography are governed by their inevitable frame, circumscribed by the artist’s eye. With a VR headset, if  you turn your head, the frame dissolves. You are the center of the universe.

You would think this radical shift in visual media would have caught on like wildfire, being the next logical step from the stationary nature of the projected theater screen and cathode-ray tube television. This wasn’t the case. The preliminary pet-projects faded from lack of funding, and the military projects remained under the cloak of state secrecy. A spattering of projects in the 80s and 90s did not yield much success. Sci-fi dreams had set the bar high, and the products of reality were slow, pixelated, bulky, and expensive.

The questionable implications VR carries hasn’t stopped artists and journalists from using the medium to cover political subjects. In 2012, the first VR documentary to be shown at the Sundance Film Festival debuted. In Hunger in Los Angeles, you see a line of people waiting their turn at an LA food bank. There are too many people. The organizer becomes overwhelmed, and begins to yell. Voices collide in a soundscape of mounting anxiety. A person close to you falls, suddenly, twisting and jerking in seizure. The computer modeling of the people is low budget, on par with an early 2000’s video game, but the sound fills the atmospheric space, lending these homunculi some semblance of life.

The film remains in the realm of the virtual with an unconvincing amount of visual “reality,” but it is a groundbreaking work of experimental narrative. Nonny de la Peña, the director of the film, is able to eschew typical narrative form and documentary tropes because of the unique way VR mediates viewer and content. It mimics how we experience trauma in real life, as an unexpected interruption of the banality of the everyday. “It creates a duality of presence. You know you’re ‘here,’ but you feel like you’re ‘there’ too,” said de la Peña of VR in a 2014 interview with BBC. It implicates the viewer by showing how events unfold when they are not bounded by the rectangular frame of a camera or a screen.

My face is pressed against the cardboard viewfinder. I’m struggling a bit to focus my eyes, but after a few moments, they rest. I listen to a young girl’s voice, in accented English,  narrate over images of domestic life. The scenes oscillate between heartening and somber, as does the accompanying piano music. *Clouds Over Sidra *is a 360º film, otherwise known as a “virtual reality documentary,” about a Syrian 12-year-old in the Zaatari refugee camp in Jordan. When the scene moves into the temporary housing unit, her home, I spin in the swivel stool I’m sitting on. I am overwhelmed with options. The action is happening in one corner, but the scene isn’t bound by the family cooking over there. A photograph or video shot would narrow my perspective to be shared with the photographer’s, but in this case, the perspective is widened in an attempt to capture everything. Instead of particular, it is panoptic. The music and narration makes me feel like I am watching a film, but the visuals remind me of a many-headed, seamless CCTV feed.

It was my first time using “virtual reality.” This was last October. I had been living in Mexico for two months. In the States, I had saturated myself with the news, reading and watching daily reminders of state-sponsored brutality and increasingly violent jingoism. I had gone cold turkey since being away. Now I was involved in a virtual reality project for a digital arts festival, creating a ‘sensory portrait’ of four citizens of DF. *Clouds Over Sidra *was the first of a half dozen projects I chain-watched that day in 360 video VR. It was a practice to familiarize myself with techniques of 360 video, since I would be shooting locations in that way in the following weeks. I spun through a Haitian vodou ceremony, post-quake. The Millions March protesting police brutality against black and brown bodies. The displaced lives of three more children of war.

I was on the sixth floor of Centro, a design school adjacent to Chapultepec Park. It’s a contemporary building, with a pallette of bright white steel and glass walls, applauded for its use of many passive climate control features. I put down the headset to give my eyes a break. I looked out at the view through the floor-to-ceiling glass. Miles of auto-constructed houses, structures of hand-poured concrete mostly built by the inhabitants themselves. Glass and a bird’s eye view, a 270º field of vision. The vertical perspective connotes power and privilege. What does the spherical perspective feel like? Solidarity? Empathy? Voyeurism? Escapism?

The day after the election, I saw videos and statuses from the protests forming across the country. None of my friends were from the States. I needed to find people to commiserate with in the streets. So I watched a Time VR video of a protest outside of Trump tower after the election. Cries for justice in 360º. I click back to the video now. The inauguration in VR, presented by ABC News, is a suggested watch. I don’t click through. I scroll through the comments section. Someone’s rose-tinted, unironic celebration, with five likes: “This is awesome. Putting my Google Cardboard on to watch the revolution!﻿” 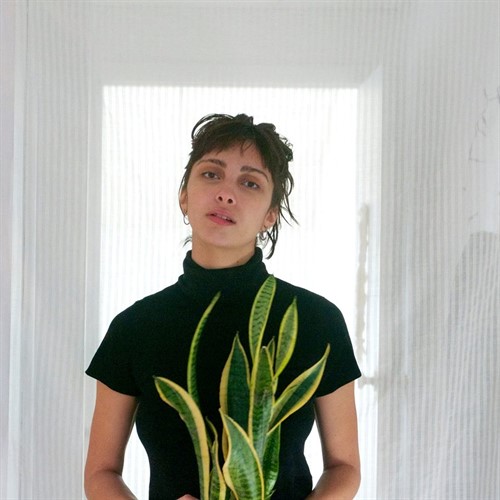 Layla Fassa is an artist and writer physically based in New York, digitally based between some terabyte hard drives and off-shore server towers, and is constantly in the midst of a multitude of virtual and real personas.