A comic about this year’s Idapalooza: A first-timer’s reflections on the good, the hard, and the in-between.

Surprise Us Mask turns five years old this month, so we brought back some of our greatest hits. 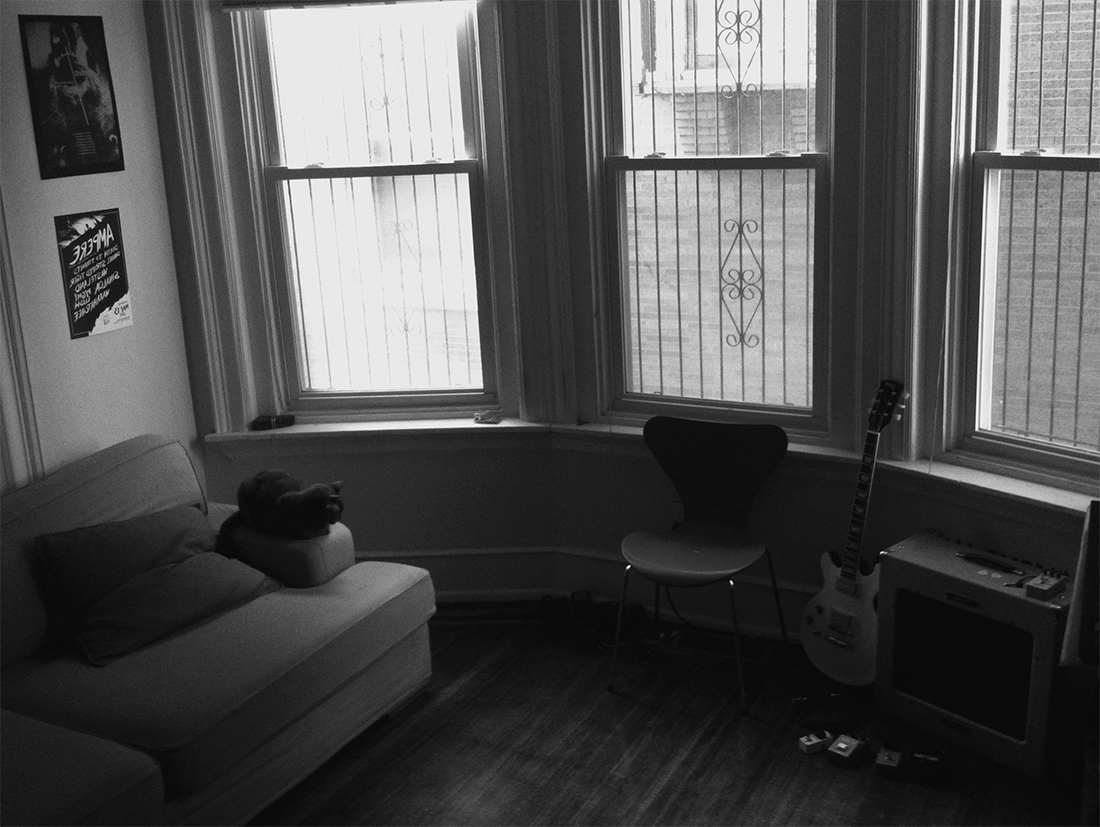 Andreas Chronis of xDYINGx regrets spending half his life in the back of a tour van.

I am looking through the windshield, and I am letting the black on the other side wash over my eyes like a wave. I am alone and there are three other people in the van with me. ¶ I am never dry, the sweat never has a chance to evaporate. I am completely in love with two different people, and I have never felt more isolated in my life. I want to ask someone for help, but I don’t have any friends I can bother with something like that. I have nothing tying me down really, but I feel a weight on my chest so heavy sometimes I could choke. I have cancer and my skin is cracked and bleeding. I am avoiding treatment, and I am avoiding medical bills, and I am avoiding discussing it. I think it’s three more hours to Philadelphia.

It is a singular kind of stupidity and self-hatred that drives one to play in a touring hardcore punk band in 2014. At best, which is to say while I’m on tour, it’s exhausting, expensive, filthy, and humiliating. The appeal is that it provides a set period of time in which you are physically barred from having any connection to reality. People talk about the friendships they make on the road, and the connectedness they feel toward some larger community of punks, but in my experience, this is mostly bullshit. People prefer relating to each other in this manner precisely because it is temporary, superficial and brief. You see your tour friends for one evening, then leave. You catch up with some old crush from three states away, maybe you fuck, but then you move on. It facilitates a great volume of human contact in a short period of time and with barely any emotional investment. You don’t have to be alone for even five minutes if you don’t want to. This is the upside.

The downsides are considerable, however. It is nearly inevitable that you’ll end up spending $9000 to repair a van that’s worth $1500. This van will then break down or catch fire at 2:30 AM between Toledo and Columbus, Ohio. You’ll put years into writing a record, then watch the LP’s sit in boxes in your living room because your music is literally garbage and of course no one would buy it. Six years later, you will secretly toss the copies you have left in a dumpster and never tell anyone. You will spend months planning a tour, then drive 700 miles to find out the show got canceled and no one told you. You will see someone who’s harmed you at every show you attend, but if you say something, you get looked at like you just ruined a birthday party.

When I was in my early teens, I was transfixed by the idea of playing in a touring band. At the time, the older hardcore kids I knew seemed so self-assured and steady. It never occurred to me that behind their unwavering façades, they were just the exhausted husks of the human beings they once were, on their very last nerve, and on the verge of financial and physical oblivion. I thought that I would find in their company a refuge from the crippling alienation and social anxiety I felt every day in school – something I imagined would only worsen as I aged into adulthood. I internalized the recruitment propaganda that punks still feed each other, about being part of a chosen family that transcends geography, space, and time. Solidarity forever, or whatever. I imagined deep sustaining friendships, forged by great personal hardship and mutual sacrifice.

Having lived in hardcore and punk circles for over half of my life now, it is nothing like I thought it would be when I first got involved. Some days, it really feels like I’ve been sold some bill of goods that I wish I could return. The promise of connectedness and lasting relationships that so attracted me to this place has never been delivered upon, and I can’t recall even half of the friendships that have been lost or dissolved in the fog of distance and time. If I’m honest, I can count the actual friendships I have now on one hand. Any punks out there who object to this characterization, I submit to you a challenge: suffer a personal tragedy or loss (develop a terminal illness, severe injury, death of a loved one), then sit back and count how many of your punk “friends” actually show up on your doorstep with a casserole.

For the most part, I no longer believe that people in hardcore sincerely wish for connectedness, community, or functional relationships even. These are lovely symbols that we hold up as surrogates for actual belonging so we don’t have to sit at home with ourselves. We are subjected to constant speech-making, mostly from the youngest present, about ways we can strengthen and deepen our ties to one another. But really, who has the energy to turn their whole life into a series of clumsy self-help workshops set to a poorly played soundtrack? Not me.

An issue is that character traits like honesty, commitment and earnestness have been aestheticized in punk culture to the point where the appearance of these attributes has more value than the actual traits themselves. I can’t even remember how many times I’ve been stiffed by show promoters I thought I could trust, had equipment or money stolen by other bands I’ve played with, seen the people nearest to me victimizing each other in the most contemptible ways imaginable. After so many years of watching everyone around me fake it, I’ve been effectively conditioned to respond to the appearance of sincerity with hostility and skepticism. It feels like a sick joke – the more honest and aboveboard someone is with me, the more suspicious I am of their motives.

What many uninitiated listeners may not realize is that hardcore and punk music is a product manufactured by a sleepless and largely unpaid workforce, much like fast food, or iPhones, but those items are actually worth money. The difference between factory workers and punks is that we have no financial motive to do what we do, just our own lukewarm belief that we’re doing something “authentic”. It’s pretty rare that any band or record produced in the punk economy breaks even, let alone turns a profit. I’ve been putting full-time hours into band projects for years, and altogether I’ve probably lost more than a hundred thousand dollars over a decade, give or take. When I try to explain to any real musician the economics at work in the projects I do, the universal response is that I must truly hate myself. They’re right.

It is an uncomfortable and unaddressed fact that people in punk bands generally do want recognition and compensation of one sort or another for the incredible volume of man-hours poured into the projects they do. Otherwise they wouldn’t be doing their work in public. There’s a strictly enforced aura of shame around admitting that you’d like to be paid, or to have a cleaner place to sleep, or have a record label cover your expenses, or any normal thing that might make your life easier. What this means is that there’s never any serious discussion of the economics at work. Young people aren’t made aware of the reality that if you’re not Converge or Against Me! by the time you’re in your mid-twenties, you probably won’t ever see any material benefit from your years of hard work. The people who promised you that punks look after each other won’t be there. You just drift farther and farther into adulthood wearing a “kick me” sign on your back.

Nearing 30 years old, I’d have to be either kidding myself or clinically insane not to notice the awful things we’ve managed to convince ourselves that we enjoy. Unventilated rooms filled with the body odor of dozens of unwashed strangers? Being expected to put in hours of unpaid time and labor to make other people’s half-assed projects possible? Spending perfectly good weekend nights surrounded by vomiting teenagers? Folk-punk? There is even a revival of interest in Oi taking place right now. Seriously, Oi. The sheer volume of bad music alone is enough to send any smart person running. Add to that embarrassingly outdated and incoherent political and philosophical ideas and you’ll be hard-pressed to find anyone worth talking to at most DIY punk concerts. If I have to listen to one more smelly crowd of ugly, drunk hard-ons with bad haircuts, listlessly clapping for a directionless speech about identity politics, I’m gonna strap a bomb to my chest and make a messy exit at the next RVIVR show.

The problem is that even though I increasingly feel revulsion at other punks, I’ve spent so long “inside” that I no longer have the personal skills or resources to relate to people in any other way. I’m institutionalized. I’ve accomplished nothing, overcome nothing, I have no marketable skills or value as a candidate for any employment, with the exception of maybe moving heavy furniture. I’m not even really an adult. This is not some disavowal or letter of resignation, though. I have no intention to quit playing music, or even to quit doing it in punk social contexts, but I can’t honestly explain why. Maybe just inertia. One thing is clear: always doing everything the hard way doesn’t make one any nicer to deal with. It won’t make you self-assured, or confident, or honest. The stress always wins.

At some point I realize that the three other people in the van are probably my three best friends in the world right now. Then I realize that I don’t really care if I still know any of them in five years. It occurs to me that I should probably be alarmed or concerned by this fact, but I’m not. We arrive back into town and unload our equipment, then I drop each of my bandmates at their respective homes with little conversation. I stumble through my front door into my apartment, which smells like cat shit and stale ejaculate from the soaked paper towels in the wastebasket, and I collapse facedown onto the clean sheets. I am struck unconscious in less than thirty seconds, and I sleep in my clothes without dreaming for twelve glorious hours.

Originally published in the “Make It Big” issue on March 9, 2014 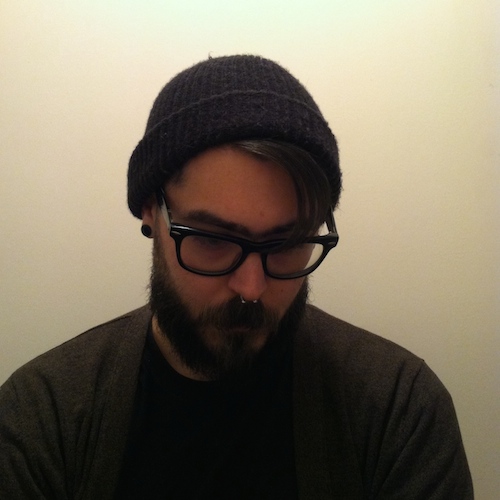 Andreas Chronis lives in Philadelphia. He plays in several hardcore bands and runs a small record label. On tumblr.