Confession: “Punk Rock ruined my life.” Andreas Chronis of xDYINGx regrets spending half his life in the back of a tour van.

Against Logic, Facts, and Reason we asked Chapo Trap House about their relationship to the Midwest 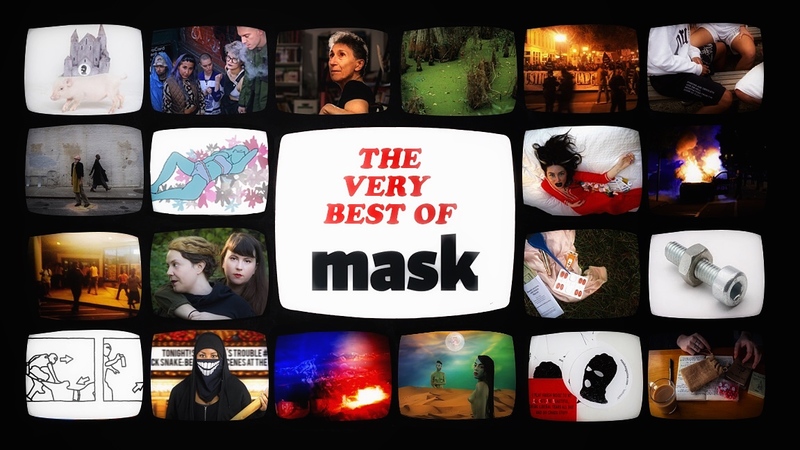 This month, it’s been five years since we published the first issue of Mask. The publishing industry may be in free-fall but that never stopped us before. We already knew that back then. It’s why we started this thing.

It was February 2014, and Mask Magazine had just gone live. We were sitting on the full-sized bed in our tiny room in Prospect Heights, eating pizza, watching little dots appear on the map view of our analytics dashboard as views trickled in. We pushed updates until moments before launch and continued all evening as we discovered bugs or missing copy. We didn’t care there were only two articles on the site for the first few days. It was out, finally. We called it a lifestyle magazine for antagonists.

All of us who were involved from the start had found our ways to revolt, anarchy, punk, and queerness in our teens. We’d grown up watching news reports of masked-up youth go wild during anti-globalization era summits. We’d found each other at punk shows or while loitering at the mall, sharing snacks we’d pocketed at the grocery store out of hunger and boredom. We’d skipped school to go to our first protest, pulling friends along and pausing before turning the corner to help each other put on eyeliner. We’d circulated books, made zines, and written poems to each other about our late-night adventures. For the first time, we felt recognized not just for our looks, but for what we could do with our brains.

Some of us freed animals bred to become fur from their cages, others painted walls at night. Some organized student strikes, others handed out free food in the park. Some broke into abandoned buildings and turned them into social centers, others converted abandoned lots into communal gardens. Some of us got arrested, but most of the time we got away. When the cops shot someone and riots broke out, we learned to see arrests as them taking one of us. By defining a common enemy, our world grew bigger. Moving to a different state or even a different country no longer seemed so scary.

Youth culture as a whole circulated around it: setting police cars on fire, creating new spaces of pleasure and collectivity, and abandoning the isolating individualism of the American Dream. The image of masked-up youth throwing molotovs at a line of riot cops was everywhere, from Levi’s “Go Forth” ad to Kanye West and Jay Z’s music video for “No Church in the Wild.” Publications like VICE started hiring our friends to write about their experiences. Not just of protest, but of all the other things we did to feel alive.

We thought, instead of selling our stories to help media companies sell ads, we should build our own media companies, charge subscriptions, and use the revenue to build something that can support more of us, longer term. The most effective way to do that, we thought, was through publishing personal narratives of everyday life, interviews with budding artists and thinkers who shared our worldview, and coverage of underground culture and style. We wanted to highlight how the aesthetics and ideas that eventually make their way to shopping malls, begin in the streets, in our bedrooms, at our parties, in our studios, on our social media profiles.

In the first few months, the articles and essays we published were sourced from friends, but it didn’t take long before others found us and started submitting their stories – stories from jail, the punk scene, party riots, juggalos, state repression, paranoia, sex work, horoscopes.

Our small team grew to include old comrades, our favorite meme accounts, fashion photographers, people we’d met on Twitter. We got an apartment in Bed-Stuy for all our friends who worked on the magazine, and an office in Bushwick with rows of desks and enough space to do photo shoots and paint banners. We spent nights on our roofs or at Happy Fun Hideaway, where you’d run into people even though you claimed you were avoiding them, dressed to the nines. Mask stickers were on every flat surface, and some of the curved ones too. We threw parties, put out mixes, did art installations. At one point we turned one of the rooms in our apartment into a recording studio and started making podcasts. We ran as fast as we could, all the while putting out a new issue every month.

And it became something we relied on. We cared about making something not just for people who followed us on the internet but for our family who’d never understood us, friends from back home, our coworkers. A way to communicate the world we know and love in a way they could understand, sometimes for the first time.

We set out to run Mask like a business, because we didn’t want to end up like so many other collective projects we’d been part of, trapped by the slowness of horizontal organizing. Our ambitions were out of this world, and we worried the window of opportunity was closing. We wanted to be able to move fast and grow quickly, hoping that would allow us to expand into media verticals like podcasting, video and print. We wanted to run an online store selling cool stuff made by people we knew, maybe even open a physical one. For a while we played around with the idea of starting a creative digital agency. We needed something like this, we thought, because the many life-sustaining projects we ran needed money. Also, we needed jobs. All of our friends were broke, and as the publishing industry continued to crumble we saw people get more and more precarious hunting down freelance checks that rarely materialized. A small-scale passion project wasn’t enough to get us there.

Over the years, about two thousand people decided to support us with a subscription, which brought in enough money to pay contributors. It also allowed us to pay a few editors small monthly stipends, to cover some of the rent for our office, and other expenses related to online publishing. But it wasn’t enough to actually cover all the work that went into it. So, we had jobs to pay our own bills and kept working on the magazine mostly on evenings and weekends. The truth is, behind the scenes Mask kept running thanks to ongoing, unpaid or barely-paid work by dozens of people.

We wanted to give others permission to not be so hard on themselves, but sometimes forgot to give ourselves this permission, too. We could’ve used it, because running a magazine is really fucking difficult. We pushed hard during those first few years, so hard we sometimes hurt each other in the process. It was stressful. There were all-nighters and arguments and weeks and months of depression. The basement of our collective house flooded, which forced some of us to move and fractured our friendships. Sometimes we took the time to repair it, other times we didn’t have the courage or percipience for it. Most days we barely kept it together.

Over the past year and a half, we slowed down significantly. Publishing less frequently meant losing subscribers, but it was so nice to get our weekends back and have time to reflect. It felt like waking up from a stress dream, when you realize all the things you’d been obsessing over so frantically never mattered that much. Or like coming out of a period of depression – the world opens up, and you’re able to feel raw again, realizing you’d been stuck in a hole, projecting the same dreary present onto every possible version of the future. Numbing yourself, forgetting that you’re fucking brilliant. Suddenly you’re open to being surprised again, unafraid of what might come.

Being alive today is maddening and strange, none of us can shoulder it all. But it doesn’t help to spend the bulk of our intellectual power indexing every single way things are fucked up. That becomes exhausting, and at a certain point it stops giving us tools to move forward. We know we’re living under intricate webs of systemic oppression, now what?

Paranoia, cynicism, and fear breed more of the same. The world we live in runs through us, and we must confront ourselves to build something else. We can’t break this world unless we first break ourselves. If we wish to make a different world, we must be open to the possibility of surprise. We want to find ways to push past our own predictability, to be shook to the core by new forms of relating. To do this, we need to turn to each other and see a friend in the making, capable of miracles. We also need to turn to ourselves with self-respect, wide-open to our own vast potential.

This is why we are taking a break, to reshuffle our team and onboard people who are taking on new roles. And we’re putting out a different kind of issue this month – a collection of some of our favorite pieces from the back catalog. Like any collection of this sort, it’s imperfect and leaves out many amazing stories. But it spans all five years and captures the eclectic mix of things to which we had the honor of giving a home. Because it’s a lot – almost 1000 articles by 260+ authors – we’ve decided to make the entire archive free to read, at least until the next issue.

We always said that all it takes to change the world is a small group of friends daring to think big and work hard together. We still believe this.