It's LOL-core season – Kids’ toys for accessories, cartoons on everything, faux fur, and lots of color.

November Horoscopes – Many planets moving through Scorpio this month. Be prepared to be a little bruised and shaken up! 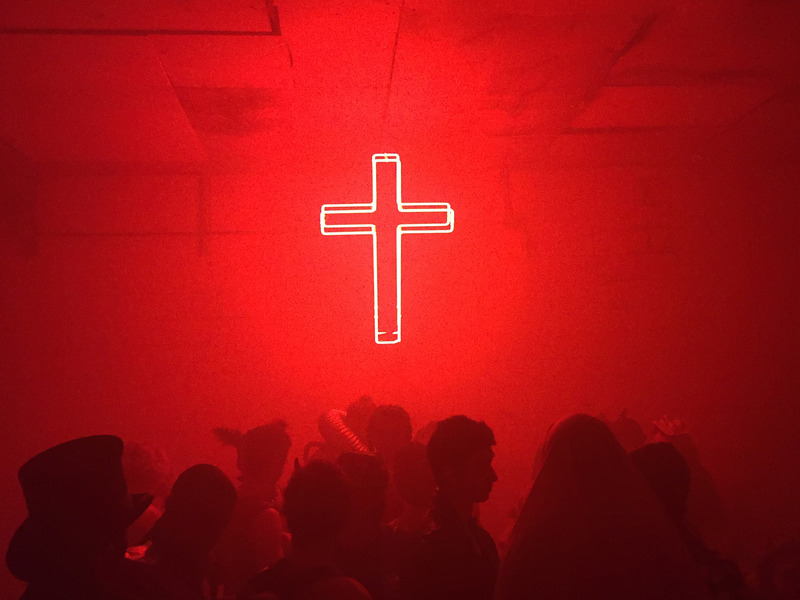 Love for All the Dead

The meaning of life is that it stops.

On February 17, 1600, Giordano Bruno was burned at the stake. His crime: several accounts of heresy, found guilty by the Roman Inquisition. The philosopher, mathematician, poet, and astrologer went even further than Copernicus and rejected the fixed position of anything in the universe, professing instead that the universe was infinite and consisted of one substance which allowed heavenly bodies to move around freely.

While Bruno's ideas are often considered pantheist – God is everywhere – others claim they should be considered pandeist – God is everything. Indeed, when Neil deGrasse Tyson recounts Bruno's story in the first episode of Cosmos: A Spacetime Odyssey, he emphasizes that Bruno’s crime wasn't atheism, but challenging authority, and claiming that the Church’s views didn't go far enough in appreciating God's greatness. Giordano Bruno has since come to be seen as a martyr of science, and his ideas are considered a milestone in the history of science.

When we talk about heresy, it's often in this same context of scientific, religious, or philosophical martyrs who were persecuted for their beliefs. Beliefs not yet in history that required the sacrifice of a life to take hold. When identifying with the heretic, these historical flashbacks tend to scorn the past for its ignorance, and paint a trajectory from the dogma of the past to the liberalism of the present.

That heresy become fashionable with liberal modernism is perhaps no coincidence. The word heresy has its roots in the Greek word hairesis, which means ‘choice’, or haireisthai, ‘to choose’. In Max Weber's The Protestant Ethic and the Spirit of Capitalism, we can trace a link between heresy and the advancement of capitalism. Protestant movements were considered heretical, but the Protestant rejection of hierarchies and aristocracy, and its call for piety and asceticism – which in terms of labor translated into working hard, doing work for its own sake – provided a fertile ground for a more dynamic market.

In the liberal democratic mindset, we couldn't care less about heresy. It seems like a completely irrelevant nuisance. Today, we don't burn dissenters on the stake, instead we name a newsletter for entrepreneurs The Heretic. We don't prosecute innovators who hold ludicrous ideas, we give $50,000 cash prices to the most disruptive startup founders. The generation that grew up on Buffy the Vampire Slayer and The Craft studies astrology, makes tinctures, practices Wicca and revives pagan rituals. If you're thinking of becoming a witch, you can learn all about it on WikiHow. Reproductive rights is a contested issue but there's also been a lot of, as they say, progress on this front.

Even though we're quite comfortable with the unorthodox today, the history of heretic movements paints a bloody and macabre course. A massacre that lasted almost half a millennium, actually. And the repression didn't come out of nowhere. Social struggles during the middle ages presented a real threat to the social order by fighting slavery, feudalism, and the Church; calling for communal living and the sharing of wealth; revolted on lines of gender and reproduction, and generally tried to turn the world upside down. As Silvia Federici writes in Caliban and the Witch, “popular heresy was less a deviation from the orthodox doctrine than a protest movement, aspiring to a radical democratization of social life”. In the backlash, every sin imaginable was lumped together in the prosecution of the ‘monstrous heretics’ who dared to question the dominant order.

The Church's retaliation against revolt didn't discriminate, but it is undeniable that shift from feudal to modern times, the advent of scientific rationalism and the formation of the modern working class was possible because of a long and brutal war against women and gender deviants. Especially in the middle of the seventeenth century, when when prosecutions for infanticide, abortion, and witchcraft reached its peak.

It was also the period in which men began to wrest control of reproduction from women; previously, ‘childbirth and the lying-in period were a kind of ritual collectively staged and controlled by women, from which men were usually excluded.’ Since the ruling class had begun to recognize its interest in increased fecundity, ‘attention was focused on the population as a fundamental category for economic and political analysis.’ The simultaneous births of modern obstetrics and modern demography were responses to the crisis. Both, like witchcraft prosecutions, sought to rationalize social reproduction in a capitalist context – that is, as the breeding of labor power.
— The Many-Headed Hydra, Peter Linebaugh, Marcus Rediker

Child birth was fraught and contradictory – it was at once the source of citizenship and fraternity under the free state, and something “monstrous, liminal, and diabolical” (93). And so it was during this time also that the word “proletariat” entered the English vocabulary – to denote the lower classes as those whose sole contribution to society were children.

[‘Proletariat’] thus reflects the devalorization of women's labor or reproduction. The currency of the term belongs to the epoch of witch-burning. The nascency of capitalism, based as it was on exploited unpaid labor, thus required control even over human parturition.
— The Many-Headed Hydra

The witch was not just the woman tampering with procreation, or the woman who expressed her sexuality outside of marriage and child birth.

The witch was also the rebel woman who talked back, argued, swore, and did not cry under torture. Rebel here refers not necessarily to any specific subversive activity in which women might be involved. Rather, it describes the female personality that had developed, especially among the peasantry, in the course of the struggle against feudal power, when women had been in the forefront of the heretical movements, often organizing in female associations, posing a growing challenge to male authority and the Church.
[...]
It was not only the deviant woman, but the woman as such, particularly the woman of the lower classes, that was put on trial, a woman who generated so much fear that in her case the relation between education and punishment was turned upside down. ‘We must,’ Jean Bodin declared, ‘spread terror among some by punishing many.’ And indeed, in some villages few were spared.
— Caliban and the Witch, Silvia Federici

What history divulges is a result of battle of contradictions, the conquest of bodies, and the victory of some world views over others. It is true that there are many “heretics” whose ideas have since taken hold and become dogma. But more importantly, the long and brutal war against heretics was incredibly effective, and this world is a product of it. You could say that the persecution of slaves, rebels, women, queers, the poor continues under a feudalism transmogrified into advanced capitalism.

What is considered heretical in any given period reveals a lot about the conditions of existence of that time. For one, the impeachment of the heretic is a highly emotional affair; the heretic is treated as monster, as something horrific, and their execution is carried out as a public spectacle, making the victim a symptom of an unresolved contradiction. Ruthless violence is carried out all the time – often “legitimately”, by the state – but only some rebels become subject to extraordinary cruelties like lynchings or witch-hunts.

Who, then, are our heretics, and what do they reveal?

Today, you're not a criminal or threat to society for holding the wrong ideas about God. There's plenty of space for insane view points: mental hospitals, lobby organizations, universities, Fox News, cults, to name a few.

The individual killer isn't necessarily a heretic either. Even though the legitimacy of the modern state arises from its promise to protect life, the threat of criminals is central to the nation's act of keeping it together.

The liberal state isn't worried about heresy, in part because it considers itself post-ideological and free. It may even seen like there is no need for heresy, in the sense of free commitment to whatever belief system, because the liberal democratic state supposedly secures exactly that.

But if what modern power reacts to with disgust is any indication of who our day's heretics are, they consist of those who conspire to riot; those who commit acts of treason, arson, and terrorism; or those who leak documents of national security secrets.

When the Western liberal nation state itself commits much more severe atrocities, via the prison system, global warfare, the war on drugs, racist immigration policies, and so on, why are such conspiracies – very insignificant in comparison – seen as grave abominations?

Talal Asad hints at one answer in his book On Suicide Bombing, in which he tries to explain why “people in the West react to verbal and visual representations of suicide bombing” with horror. Asad suicide bombers represent such a threat to the Western liberal psyche because they threaten the identity and coherence of dominant subjects, and, in their acts, uncover contradictions underpinning modern power.

One such contradiction that a suicide bombing reveals is the inconsistency in the state’s role to protect some lives by the killing of others – “on the one hand, [...] to use any means necessary (including homicide and suicide) to defend the nation-state that constitutes one’s worldly identity and defends one’s health and security and, on the other, the obligation to revere all human life, to offer life in place of death to universal humanity.” It is dominion alone – the state (or God) – that determines when and where crossing the limits of the human body is legitimate, and do the “restorative work when transgression occurs.”

[The state] does not forbid the killing of human life itself. On the contrary, power dissolves living bodies as punishment for outrages committed or as sacrifice in “just” wars. But it also regulates the transformation of all dying bodies – the transition from life to death – by way of mortuary and mourning rites, cemeteries and war memorials.
[...]
Thus it is not the occurrence of death as such in which horror resides but the manner in which it occurs and how the dead body is dealt with by the living
— On Suicide Bombing, Talal Asad

What the suicide act violates in the Western liberal perspective is that lives are sacrificed without such restorative justification.

Ultimately, the most unsettling aspect of the suicide bomber to the liberal state is perhaps that the selfless and sacrificial nature of the act resembles something secular modernity renders obsolete – that is, “the limitless pursuit of freedom”.

Liberalism, of course, disapproves of the violent exercise of freedom outside the frame of law. But the law itself is founded by and continuously depends on coercive violence. If modern war seeks to found or to defend a free political community with its own law, can one say that suicide terrorism (like a suicidal nuclear strike) belongs in this sense to liberalism?

This November, we consider heresy. What does it mean to commit blasphemy? Who does society burn at the stake?

For some guidance through this month of the Scorpio, check out the latest horoscopes from Corina Dross. Next up is our interview with poet, writer, and scholar Jackie Wang, whose essay Against Innocence was published by Lies Journal and later Semiotext(e). Check back in for an essay on ‘nunsploitation’ in popular culture, a think piece on recent TV shows that in gory detail twists with the contradictions of the modern psyche, an exploration of the rise of the highly divisive Chicago drill style, and more!