Bake Up Your Break Up A recipe for French toast that'll fill bellies and hearts at the same time. 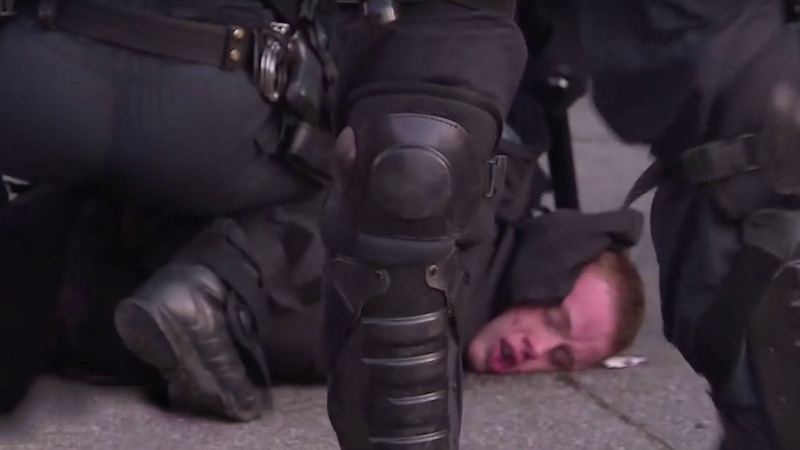 Between 150-200 neo-Nazis held an anti-immigration march in southern Leipzig, Germany on December 12. In response, about a dozen counter-protests were set up with more than a thousand anti-fascists participating. Police deployed an estimated 800 officers to try to keep the Nazis separated from the anti-fascist counter-protesters. The anti-fascists attempted to stop the Nazi march, lighting wooden barricades and trash cans on fire throughout the city. The cops then responded by beating counter-protesters and journalists along with spraying tear gas, pepper spray, and water cannons at them. A riot then ensued with anti-fascists fighting back against police for hours, continuing even after the Nazis stopped marching. The anti-fascists threw rocks and bottles at police, set the roof of a warehouse on fire, smashed shop windows, destroyed a bus stop, damaged at least 50 police vehicles, and injured 69 cops. Several counter-protesters were injured, and 23 were arrested by the end of the day, including a 61-year-old pastor.

A so-called “Master Plan” by Ethiopian government to integrate parts of the Oromia region, home to the country’s Oromo ethnic group, into the capital, Addis Ababa, sparked multiple protests late last month. The Oromo fear that this plan will lead to a land grab by the government and that Oramia will lose some of its autonomy. Though the Oromo are numerically the largest ethnic group, they have long complained of disenfranchisement and marginalization in the country. On December 15, during protests taking place west of Addis Ababa, police fired on unarmed protesters and killed at least four people. Some claim as many as 13 were killed that day. The government claims the protesters are linked to terrorist groups and are trying to start a revolution. Human rights groups say that this is just an excuse for the government’s violent repression of the protests. At least 40 people have died since the protests began last month. Similar protests in 2014 led to at least nine people losing their lives.

Turkish police and military have continued their brutal crackdown on militant resistance in Kurdistan, with curfews in multiple towns and almost constant gunfire. The Kurdish towns of Cizre, Silopi, and Nusaybin were placed under curfew on December 14. Meanwhile, that same day in Diyarbakir (known as Amed in Kurdish), 21-year-old Şerdıl Cengiz and 18-year-old Şiyar Salman were gunned down by police during protests against Turkey’s war on the Kurds. In Cizre on December 16, 30-year-old mother of two, Hediye Şen, was killed by police gunfire. On the same day in Nusaybin, 22-year-old refugee from Rojava, Hussein Ahmed, was killed and 12-year-old Ibrahîm Bulca was severely wounded by Turkish cops. Many more have been killed by Turkish authorities during the 52 curfews imposed on various Kurdish towns since August. When Turkish students in Ankara held a march on December 17 in solidarity with the Kurds, police sprayed tear gas and water cannons at them. Students fought back with rocks and fireworks, but six of them ended up getting bagged by cops.

In the USA, over 1,090 people have been killed by cops this year, including 25-year-old Christopher Goodwill who, with only a knife in his hand, was shot down on December 12 in Indianapolis. The shooting angered onlookers who questioned whether the mentally-ill Goodwill deserved to get murdered over a knife. The furious crowd yelled and cursed at the police, and one officer’s car window was smashed.