Refrains of a Metal Unicorn

Prisoners Launch Nation-Wide Strike Building on the 2016 prison strike, this one is predicted to be even bigger. 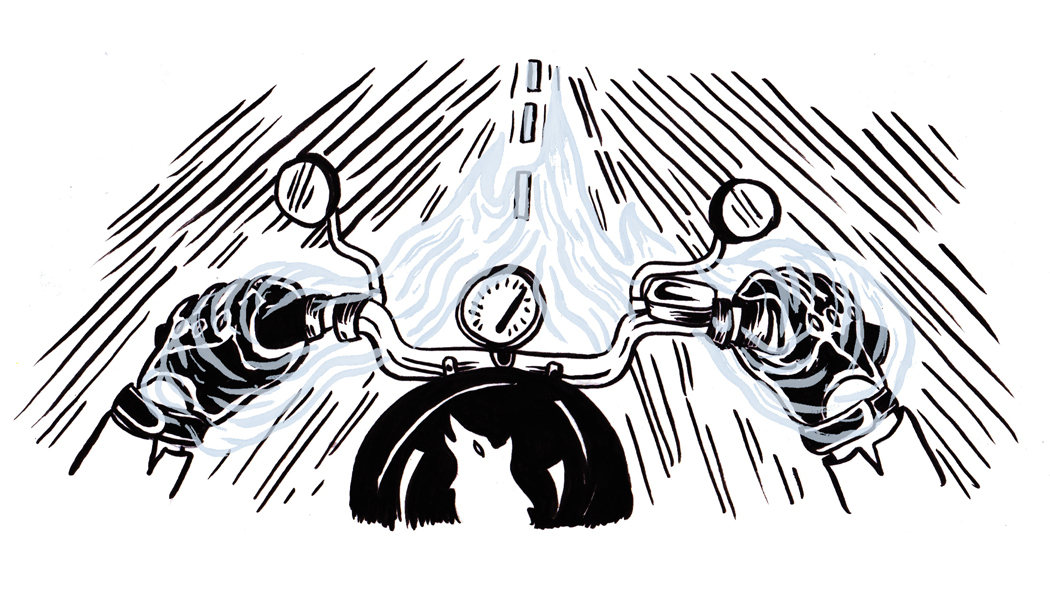 Refrains of a Metal Unicorn

In order to take the first step toward invincibility, you have to recognize its limits.

Riding’s only scary if you don’t know how.

You’ve heard guys say this too many times to count, accompanied by the predictable Man the fuck up or the even less surprising Stop being a pussy. With motorcyclists, especially guys, there’s this reliance on ego, on the assumption that testosterone erodes fear; they believe that – as long as they have big enough balls – they are omnipotent, infallible, and fucking untouchable.

That is, until their bro-tanked biceps collide with the searing California pavement at 80, 45, even 15 miles an hour. Then all those hours they spent with their legs stuck to the tattoo parlor’s slightly damp leather chair, as expressionless as recollected male role models, that zero-fucks attitude they’ve worked so goddamned hard to cultivate peels away, along with their precisely inked flesh. They didn’t know what being burned alive felt like until they scrubbed gravel from road rash, until their hide hangs in ribbons from elbows and they have to graft skin from their ass to reconstruct marbleized arms. Instead of a god, they are a walking statue, some surgeon’s interpretation of the divine, broken and weathered by time.

But that’s the difference between you and the guys: You understand consequences. Every time you shove the full-face over your head and zip up your armored jacket you see the split-second image of your prone body lying in wait on the concrete, a half-broken mess of bloody limbs and mangled flesh, a harrowing premonition of the crash to come.

But instead of your joints locking up, you unlock the steering column, rev your engine, prepare to ride into the pit of your stomach. Fuck, you accelerate into it, hearing the wind’s whistle over internal screams that make you feel more divine than pretending the fear wasn’t there. In order to take the first step toward invincibility, you have to recognize its limits.

Because being on a motorcycle makes you feel fucking invincible. You glide through traffic, shedding humanity to evolve into some half-metal animal at one with your surroundings. You become soothsayer of the mechanic, reading automotive futures like tea leaves: the Civic pulling out in front of you, the Suburban changing lanes sans signal, the Lexus blowing through the red light. You give Priuses wide berth because they’re always doing weird shit, like driving 10 mph below the speed limit or the wrong direction down one-way streets, never confident in where they’re going. And Caddies try to race you, failing to see the irony in betting their 60-grand, 4,000-pound, V-8 against your 600cc cruiser you bought for less than $2,000 off Craigslist. Your bike might be more than two decades old but she still beats cars off the line. You laugh every time it happens, even when the car speeds off in front of you after you hit your target speed, fast enough to get ahead of traffic but not reckless enough to garner cops’ attention. At least Caddies are better than the Beamers who get mad when you lane split, trying to force enough space to follow your lead only to get stuck, five cars back pounding their fists against leather steering wheels as you cruise through a yellow light. 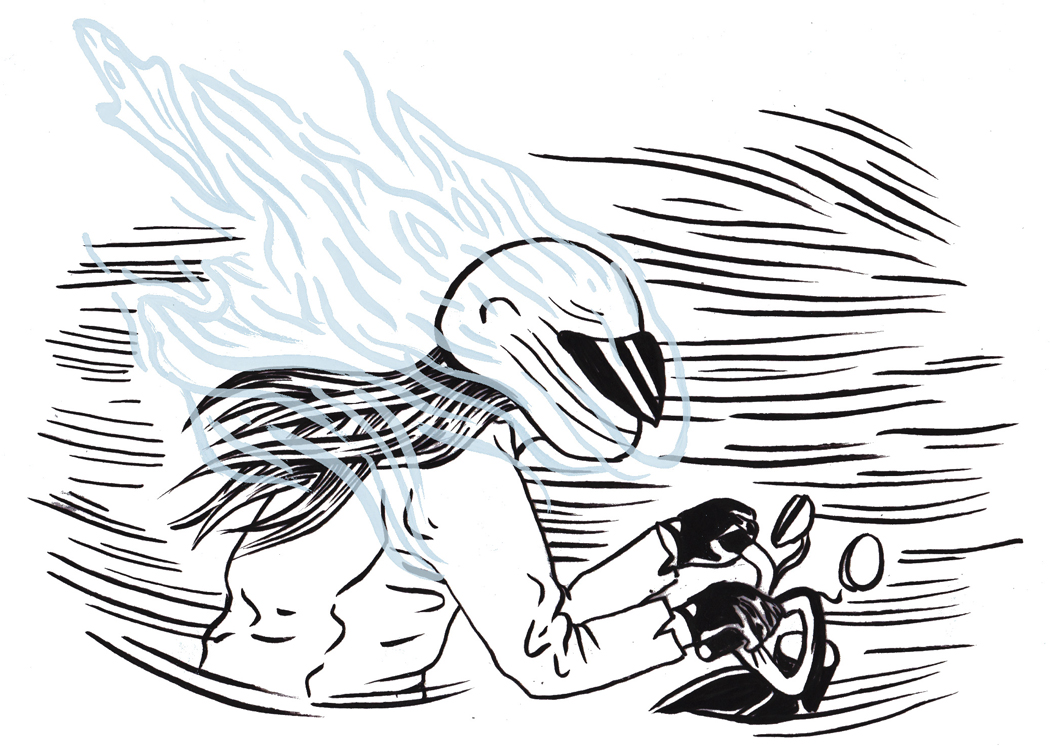 In Los Angeles, drivers are miserable, swearing daily in their cars, forever stuck behind some out-of-state license plate who has no idea where they’re going. In LA, there’s too many people and no open roads, everyone is trying to get where they were supposed to be five –fuck, now six –minutes ago. No one wants to be driving, and everyone wishes the public transportation system didn’t suck, cursing earthquakes, and Mother Nature, and every other person on this godforsaken planet for taking up space. Driving in LA turns people into misanthropes, sadomasochists who would sooner get into an accident than allow someone else to get somewhere first. If they’re going down, they’re sure as shit taking you with them.

But who needs an ego when you’re invincible, you think, bobbing your head in rhythm to the music pouring through your helmet as you push and pull your handlebars, effortlessly evading potholes and human shortcomings while admiring the beauty of reflected light and the sound of wind socializing with the engine humming beneath you. You understand the importance of balance as you downshift to stop, veering to your left to let the little Ninja300 zip past, rider hunkered over the gas. You understand camaraderie as you wave to oncoming motorcyclists or head-nod to riders who pull up next to you, each one a friend you haven’t met yet and will forget by the next traffic light. You even throw a peace sign to the scooters bopping around side streets, although they always seem too scared to wave back, knuckles clenched white over throttles and a tension in their shoulders that doesn’t look like much fun at all.

You’re glad you didn’t settle for a Vespa, even though you failed the motorcycle safety class in San Jose the first time and drove home crying, mascara blurring your eyes. You resented your ex-boyfriend for passing on his first try, too stubborn to admit physicality came easier to him. You aced the written test, of course. You were so frustrated you almost quit, except you had already dissolved your savings to buy that teal Shadow which matched your preferred eyeliner, and you’d be damned to give them the satisfaction of being right, even if you weren’t really sure who they were but knew they were decidedly male: the incorporeal patriarchy dictating female limitations. Plus, your older brother rode, and you decided a long time ago you could do anything he could, Boy Scouts be damned.

Quitting wasn’t an option, so you pushed that throat-knot down into your stomach and signed up for another class. You practiced riding at night on your own bike, so terrified to drop it and fuck up its paint job with the telltale noob scratches that you rarely went above first gear. You almost canceled your second course, but when they told you they couldn’t refund your money, you decided you might as well just suck it up.

You were still nervous when you showed up, sweat trickling down your bra and numbing your fingers, even though the sun hadn’t begun to bake the pavement yet. But when you straddled the provided beater bike, a Rebel250, it felt manageable, maneuverable, a 300-pound toy compared to your 450-pound Shadow. And where your Shadow was finicky – stalling repeatedly when you tried to cold-start the engine at night – the Rebel was forgiving, worn down by dozens of inexperienced hands. The scratches on its black gas tank and chrome pipes made you not feel as guilty when you dropped it, which of course you still did. But you let go of your frustration, took a breath deep enough to fog up your helmet, and hopped back on.

Instead of the first time, when you had shied away from your classmates, focusing on your private feminist rebellion, you found conversation eased your anxiety. When test day came, you cheered your classmates on, drowning your doubts in support. And when you passed with hands so shaky you could barely fill out the exit paperwork, you realized that riding is not a zero-sum game.

With your new M1 license, you felt justified binge watching Sons of Anarchy but you quickly got pissed at the overt sexism laid bare in motorcycle culture. Sure, the show’s about a motorcycle club that runs drugs and does illegal shit (read: white, male, definitely not progressive) but you figured there would be one girl that had her own bike: the rebel – possibly a love interest for the male protagonist because her existence needs his validation – someone to represent the more than 14 percent of bike owners in the United States who are women. But the leather chapped female characters only rode bitch, manicured nails gripping sissy bars or their man’s jacket. Like their sisters before them, they had been designated passengers, passive objects without agency whose utility extended as far as the male gaze.

And so you told every woman you knew to get a bike, half out of spite, believing you could help crush sexism in a male-dominated industry. A few of your friends listened. One poured hours into getting a beater café racer up and running, another modified a Grom because she was too petite to ride anything larger. A year and a different Californian city later, you convinced another to take the class, and before you knew it she was riding her Rebel250 to Joshua Tree and back. They had surpassed you – in mechanical abilities, in fearlessness, in general badassery – and you almost didn’t care. You wanted an army of biker chicks scattered up and down the California coast who laughed as they rode past men’s stares. But none of you could have prepared for what comes after the stares.

In a black padded motorcycle jacket and Shoei RF-1200 – a men’s helmet, technically, adorned in an iridescent skull you fell in love with the moment you saw it after realizing manufacturers only made women’s in various shades of pink, purple, and ugly – you are androgynous as you ride past, free of human conventions as long as you keep moving. You don’t have to think about floral marketing ploys used to target women or about how male designers can’t seem to understand what a female body looks like that isn’t 5’4” and 115 pounds; you don’t have to think. But once you stop, the eyes have time to adjust to the knee-high boots and eyeliner: You become, once again, publicly female, the unwilling focus of constant male curiosity.

“People act like a girl on a motorcycle is like seeing a fucking unicorn,” Rebel250 says as you gear up for a ride. “Like, calm down.” She shakes her head, angrily shoving her white helmet in place. You smile, knowing too well what she means.

Every time you dismount, guys chat you up. Old white dudes with bearded pot bellies show you ill-lit smartphone pictures of garage bikes or explain the huge Harley they just sold – $2,000 paint job, candy-apple red, chromed-out everything – and the beast they’re gonna trade up for, some sofa-on-wheels so heavy the pegs...

This is a preview of one of our feature articles, the other 61% of this is available to subscribers. 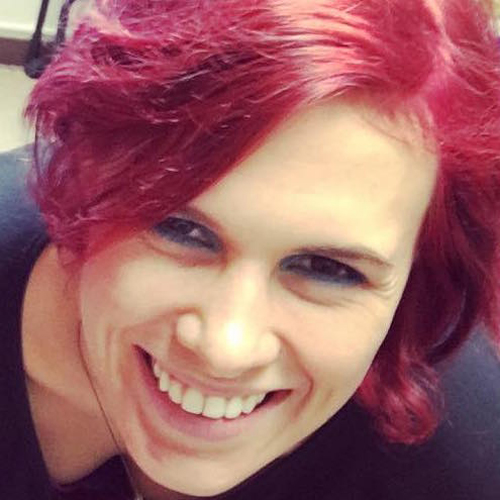 Kym Cunningham obtained her MFA from San Jose State University. She has received the Ida Fay Sachs Ludwig Memorial Scholarship, the Academy of American Poets Prize, MARY’s Editor’s Prize, and two Pushcart Prize nominations. Her writing has been published in more than a dozen literary journals and two anthologies. Her first chapbook was published in February 2018.