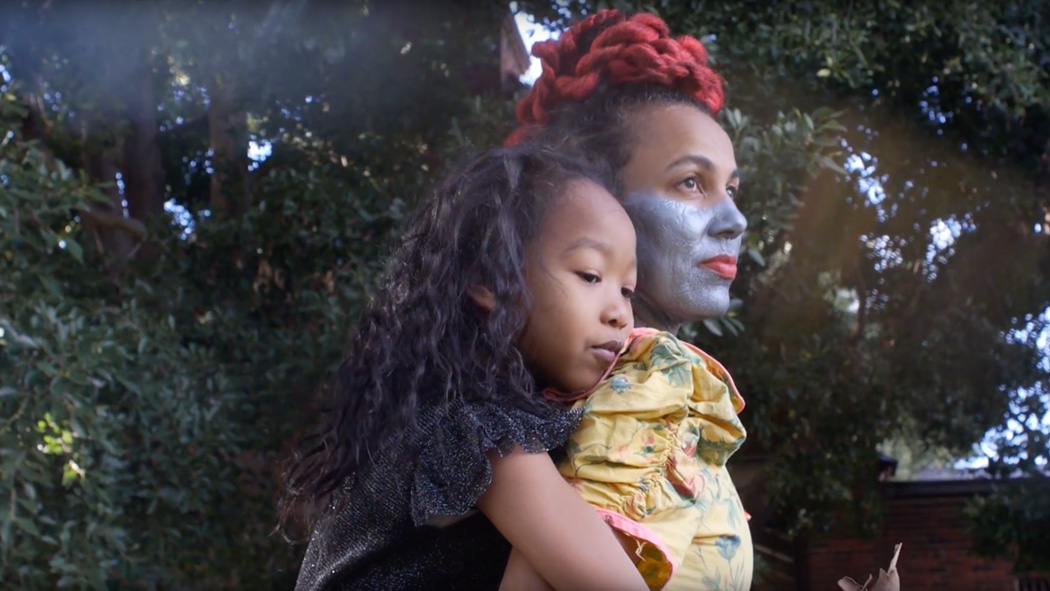 Oakland-based XUXA SANTAMARIA is premiering the music video for “Hollywood Babylon” on Mask Magazine today. Watch the video while reading our interview with artist, performer and singer-song writer Sofía Córdova below.

If you’ve never heard of XUXA SANTAMARIA, listening to “Hollywood Babylon” might make you question your own memory: it sounds both completely new and eerily familiar. This is not accidental.

XUXA SANTAMARIA is a music and art project that strives to inspire collective resistance through pop and dance music. The music is in part designed to recall the mash of nostalgic and complicatedly post-colonial references people who grew up in the 90s are familiar with. “Hollywood Babylon” is solidly pop rock, resembling songs by bands like Metric and Yeah Yeah Yeahs. But XUXA SANTAMARIA as a whole is a lot more conceptual than your average pop music project, something more akin to The Knife.

Sofía Córdova, the artist, performer, scholar, and singer-song writer whose existential crisis birthed the project, describe XUXA SANTAMARIA as an alter ego “who was born in 1492 with the arrival of Columbus to the Caribbean.” Together with her partner and collaborator, musician Matt Gonzalez Kirkland, she resists the pressure of the music industry to churn out albums and tours for profit. They produce dance music because they see pleasurable experiences like pop music and dance parties as situations in which painful questions of identity, history, and belonging reside. Naturally, music with such far-reaching goals takes time to produce.

Earlier this week, I called up Sofía Córdova to ask her about her creative process and feelings about the current political climate.

What’s the story behind the name and the project XUXA SANTAMARIA?

This all started at the end of 2008. [Matt Gonzalez Kirkland and I] had just moved to California where I was starting grad school. I was a very formal practitioner [of photography] at the time and I was enamored with the traditional art world. But then I had this crisis when I realized I had slipped under the rug all of these questions that I had bubbling within me about my identity.

I grew up in Puerto Rico. I went to a school inside a naval base, and I had a very tenuous relationship with the States. But when I moved here to go to college, I never really thought about what that reality meant for me and how it might factor into my work. I was still pretty young so the language of these things was still new.

In that panicked moment in grad school, I realized that I didn’t want to be just a photographer. I decided to take sharp left turn. I took a break from theory and read two books which serendipitously pointed me down the path that I’m now on. One, Real Punks Don’t Wear Black by Frank Kogan. I really jammed with on one of his essays which equated disco and punk. You’re always taught that disco and punk are enemies, but in fact they are both struggling to create safe spaces for their contingencies. The second book was The Brief Wondrous Life of Oscar Wao by Junot Díaz. In that book I saw for the first time my Caribbean subjectivity mirrored back to me. In this really strange way, because he plays so hard with the stereotypical identities that we flip into to survive in America. But he also has this character that’s fascinated by science fiction and nerdy things. Things that your own mother country might deem uncool. For the first time, I realized that my entire life after leaving home had come to be about living in this in-between space. Once I left I was not a hundred percent of that place anymore, but I will never be American either. It empowered me. It taught me that the slippery in-between place is my power place.

These texts made me think about all of the music genres that had resulted from this great migration during the 20th century from from all over the Caribbean into the United States. This painful migration birthed this third thing – genres like salsa, latin freestyle, boogaloo and early hip hop – that wouldn’t have happened neither here nor there otherwise. It needed this influx of people that were in transit themselves.