Videogame designer and ex-scuzzy femme merritt kopas talks about pivoting into new projects and having a streamlined internet personality.

The Queer Anti-Guide to Snacking in Mexico City Foreigners are told not to eat it, but who cares? Come and eat as much as you can; this guide is for you. 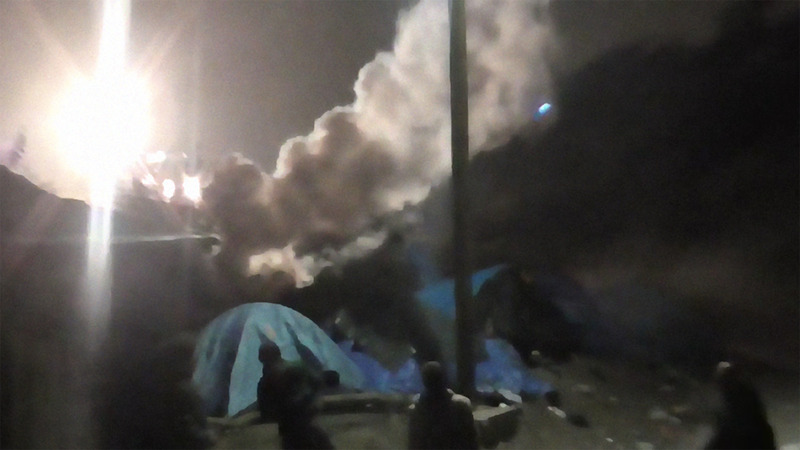 French police throwing tear gas into “The Jungle” – the refugee camp in Calais.

In Calais, France, migrants from the Middle East and North Africa have for years been living in a camp on the outskirts of town known as “The Jungle.” Migrants often end up at the camp before heading into the UK, and cops are notoriously heavy-handed when dealing with the camp’s inhabitants. On Tuesday, November 10, migrants blocked a nearby highway on what was a third night of protests against the camp’s miserable conditions. Police then cracked down hard on the migrants, spraying tear gas and water cannons at migrants to force them back into The Jungle. Many migrants tried to hop on trucks headed into the UK with little luck. Back at the camp, police continued their assault on all the migrants, filling the camp with tear gas and firing rubber bullets and concussion grenades at families and children. By the end of it all, four refugees ended up being arrested, and another four needed medical treatment for injuries.

4 #refugees arrested and 4 being treated by a medic at #Calais jungle entrance.

Police now entering the #calais jungle on foot supported by their water canon. A total of 56 gas rounds fired.

On Wednesday, November 11, normalistas from the Raúl Isidro Burgos Rural School, the same school attended by the 43 students kidnapped by Mexican police last year, were also attacked by state and federal police on their bus ride back from Chilpancingo. Police followed and shot tear gas at the buses the student-teachers were riding in and beat them as they fled. The buses had their windows smashed by cops, at least 13 normalistas were arrested, and more than eight were injured. Cops also tried to prevent journalists from filming the attack and even beat reporters with their press passes visible. The cops say the attack was because the students had stolen fuel from a truck full of gasoline. One of the students said that cops were just trying to intimidate them before a big march scheduled for Saturday.

Pic from Tixtla, Guerrero tonight where Ayotzinapa students were attacked by police. He has a press pass & camera. pic.twitter.com/Yzh1xTi9Ec

In Turkey’s Diyarbakır province, three districts in the mostly Kurdish city of Silvan have been under curfew since November 3. Turkey’s cops and military have taken their fight against the Kurdistan Workers’ Party (PKK) to Silvan’s streets with the current curfew being Silvan’s sixth since August. Trenches and barricades put up by locals to keep out police have been torn down, and thousands of residents have fled the city, many leaving all their belongings behind. According to the Human Rights Foundation of Turkey (TİHV), at least six civilians in Silvan were killed by Turkish cops and soldiers between November 3 and November 11. Schools have been closed, buildings are covered in bulletholes, food and water supplies are dwindling, and the skies and streets are filled with helicopters, armored vehicles, tanks, and the constant sound of gunfire. Officials from the pro-Kurdish People’s Democratic Party (HDP) tried to enter the town on November 12 but were attacked by police with tear gas and water cannons. People in other cities also protested on November 12 against the Turkish state’s actions in Silvan. Hundreds protested in Istanbul’s Gazi district but were soon attacked by police with water cannons and tear gas. Dozens were also arrested at protests in the İzmir province and the İdil district of Şırnak. Meanwhile, Turkish Prime Minister Ahmet Davutoğlu has insisted that Silvan’s streets are safe and that military and police operations “will continue until not a single terrorist remains.”

In the USA, over 990 people have been killed by police this year including an unnamed and unarmed Latino man in his 30s who police shot with a taser, beanbag rounds, and bullets for “acting bizarrely” and standing in traffic.