A comic about this year’s Idapalooza: A first-timer’s reflections on the good, the hard, and the in-between.

Cheap Summer Adventures for when you're just sitting there, with empty pockets, sticking to yourself and the internet just isn't cutting it. 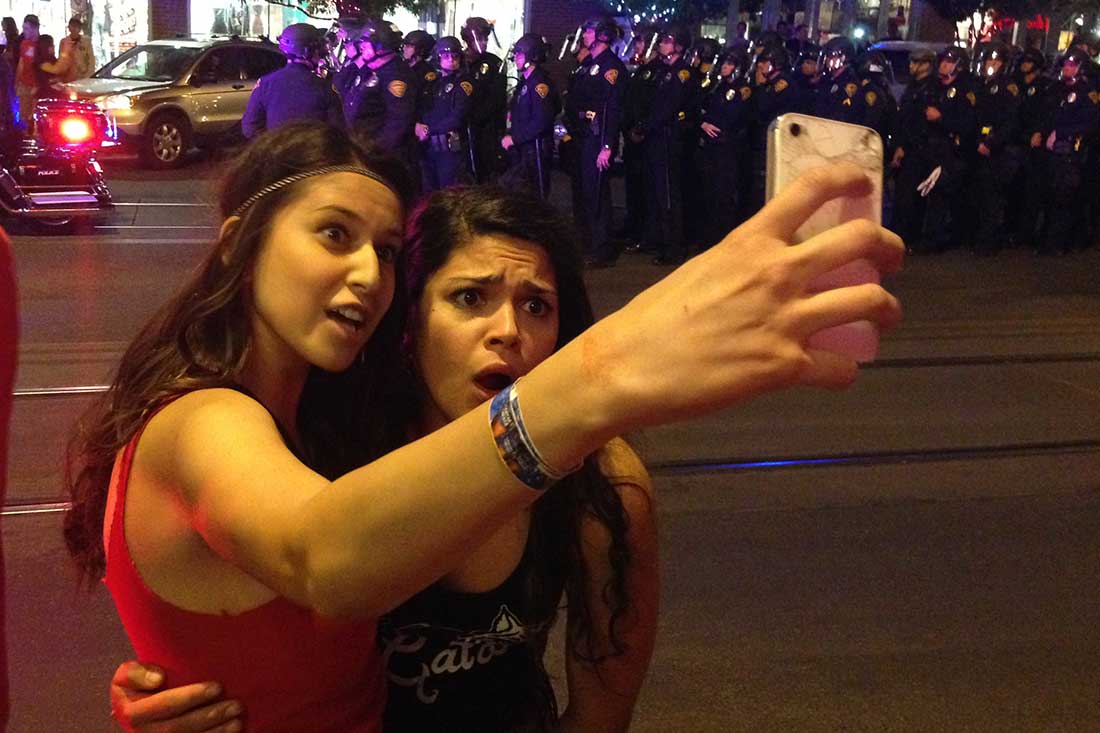 A Year of Pop Music and Party Riots

We don’t wanna leave, we just wanna be right now, I don’t care, we can’t stop, we won’t stop, we’ll fight ‘til it’s over.

“The subject of a lot of these [contemporary pop] songs is sort of an amorphous, riotous “we” – it’s whoever is there and down to participate... I get the feeling that we’re still a few years away from seeing the really threatening ‘we.’ If there’s to be a revolution in our lifetime, it will be accomplished by 14-year-olds two years from now. True Beliebers.”

In November 2011, at the height of #Occupy’s boundless optimism, Max Fox and Malcolm Harris published a provocative dialogue1 that attempted to connect the popularity and demographics of the growing movement with the insurrectionary content of recent Hollywood films and mainstream pop music. According to their theory, the culture industry has commodified revolt so effectively and aggressively that it is spilling back onto real-life, inspiring rebellion and potentially disrupting the stability of other economic sectors. They posit:

Just because capital has brought a thing inside itself doesn’t mean that thing can’t be threatening to it. I mean, it contains labor within itself, it contains communism in itself. It is contradictory, and the condition of its own demise.

If you do a close reading of almost any of these pop songs, especially the better ones, it’s amazing to see the fragments that stick out. The only feeling left for the music industry to sell back to us is crisis, and it makes for really great dance music.

Their analysis included a particularly lofty prediction that in two years time we would see the emergence of a “really threatening ‘we,’” a cohort of all-grown-up “True Beliebers” capable of bringing about a social revolution. While obviously laced with a careful dose of tongue-in-cheek irony, I personally took solace in this romanticized notion of youthful revolt and secretly looked forward to the day I would find other masked youth in the street and wreck shit to the soundtrack of 2013’s futuristic pop music. But, with a few exciting exceptions2, that just simply didn’t happen.

Twenty thirteen came and went in the US, and all we seemed capable of were a series of collective, envious sighs for the contagious riots and insurrections spreading to everywhere but here. Turkey, Brazil, the Philippines, Sweden, Thailand, the Mi’kmaq territory of “New Brunswick,” Romania, Bangladesh, China. While nowhere saw the actualization of lasting stateless communism, and many contexts fell back into the trap of party politics, it all felt so much more interesting than the social peace impasse we couldn’t seem to break through here in these United States. 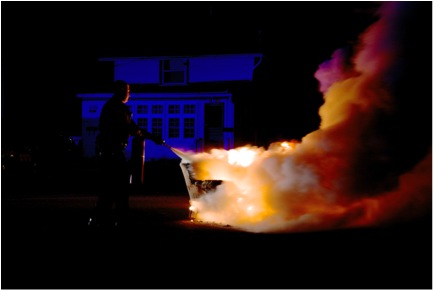 “If apathy is sitting on the couch all day, nihilism is setting your couch on fire.”

Over the course of 9 months, at least thirteen U.S. college celebrations devolved into large-scale riots resulting in untold numbers of arrests, police injuries, and burning couches. But who were these students, and what the hell were they rioting over anyway? Could this really have been the work of the “True Beliebers” that Fox and Harris predicted almost two years ago? Was pop music really the catalyst that turned block parties into full-blown riots? Even after mulling over hours of bystanders’ smartphone videos, I am still unable to answer any of these questions decisively, but I have a few hypotheses.

I don’t disagree with Fox and Harris’ position that Capital’s latest, greatest recuperation scheme – commodifying revolt and selling it back to precarious American youth – might open some interesting situations for us to explore. They definitely missed the mark, however, when they predicted that some sort of “social revolution” would be built on these contradictions in two years time. Instead, I would agree with the Greek communization collective Blaumachen in presuming that:

“we are entering into an era of riots, which will be transitional and extremely violent. It will define the reproduction crisis of the proletariat, and thus of capitalism, as an important structural element of the following period. By ‘riots’ we mean struggles for demands or struggles without demands that will take violent forms and will transform the urban environments into areas of unrest; the riots are not revolution.”

While I won’t attempt to put a year on when such a social upheaval might actually come to the United States3, it is clear to me that what happened in the spring and fall of 2013 was not some wave of American political revolt, but more close to a nihilistic rebellion precisely in its absence. As Bethy Squires notes in her think piece on the popularity of Icona Pop’s smash hit I Love It:

“The millennials who are getting incendiary think pieces in The New York Times are mad about this, the systemic screwing over of the world via staggering debt on a personal and national level, environmental devastation, culture wars, real wars, and Monsanto. But among a growing population a different take on this shitty situation is being espoused. We don’t care. Nihilism is making a comeback, folks. Not necessarily taken into our hearts but at least shouted back at the world in the face of its indifference. Sing it with me now. I don’t care. I love it.
[...]
Nihilism gets a bum rap as an immobilizing force, but I find it very freeing. It’s less of a ‘why bother’ and more of a ‘why not?’ Your failures have as little impact on society as your successes, so why not go apeshit?”

While each had their own particular nuances, none of these student rebellions were directly the result of some catalyzing political decisions that mobilized our parents’ generation, like a tuition raise or imperialist invasion. If anything, the rebellions thrived precisely within this vacuum of political activism, which has reached an all time low on most college campuses. Within this post-Occupy vacuity, however, we are still being force-fed insurrectionary spectacles like The Hunger Games, Ellie Goulding’s Burn and 2013’s Ukraine. The real life and fictive images from the era of riots have taken on a whole new meaning in the new nihilist’s imagination, and it’s begun to spill over into the unlikeliest of arenas.

“Every promoter who brings together a great crowd in order to sell them back their own togetherness runs the risk that some of his customers will take things too far and engage in some street sports of their own.” 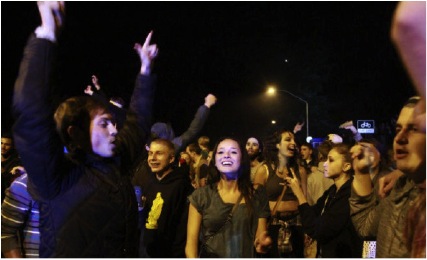 So, what exactly should we call these social phenomena? Some might point out that “sports riots” are commonplace in the States, but even so, I would argue that these events had a markedly different flavor to them; a sizable majority were not provoked by any sort of sports event at all, and those that were occurred regardless of whether the team won or not. Unlike the spectacular sports riots of the 1990’s, these students seemed more interested in just getting hella turnt up with a bunch of other friends than, say, flipping cars. Until cops intervened, that is. And once that cork was out of the bottle, there was no putting it back in. But why would police react in such heavy-handed ways to these crowds?

This is a preview of one of our feature articles, the other 80% of this is available to subscribers.