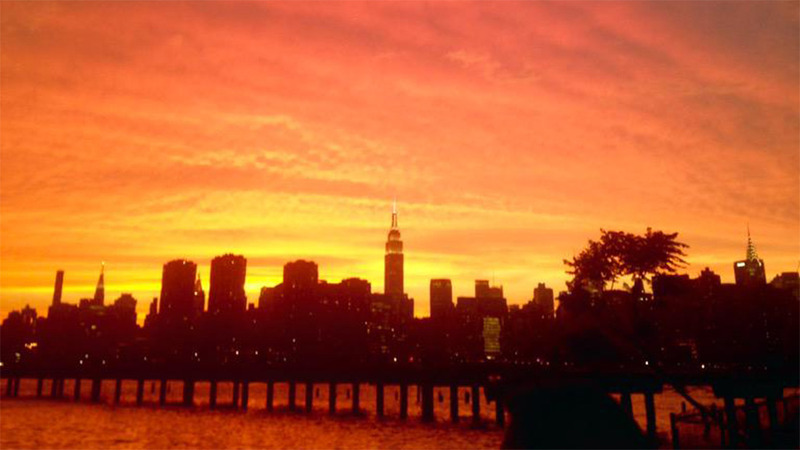 We all know where we were on June 23, 2015 at 8:30 PM. I assume most of my readers were either stuck late at work or unemployed and blacking out at a bar alone or with “friends.” From a bar stool in Greenpoint I noticed the blend of canary and grapefruit-colored light on the west side. A gathering of people I thought were cooler than me was happening later in the evening so I wanted to pregame and get my buzz on as to not seem like a tense nerd. Having a staring contest with the outside world in my boozy haze, I left my half full drink behind and headed outside to see if the bar had tinted windows or if a giant road flare was ablaze next door.

Instinctively, I began my brisk mince to the waterfront and was met by the silhouettes of three couples wrapped around each other set against the Manhattan skyline. As I got closer I saw that all three couples were lesbians, which isn’t that crazy because it’s 2015, but like... To the distant side was a uniformed off-duty sanitation worker with a huge DSLR propped up on a tripod next to his government issued late model Ford Taurus. We made eye contact and I mouthed “hi” but I made sure not to make a sound out of respect to the other spectators. Silence felt encouraged like in an art museum so I kept my trap shut.

After looking at the sky for ten achingly long seconds pretending to be entranced by the the sunset, I couldn’t help but think that my busted ass iPhone 5C in my pocket missed me. Immediately the flood gates on my Instagram, Vine, and Twitter were opened; I truly let it rip. Everyone was also on the same tip as me, as I’m sure you all know. Normally I would deem an Instagram spectacle of this caliber as demonic at best, but I did not mind this happening at all. With the news lately being an absolute brutal nightmare, it felt good for a second to focus on something we can all experience and appreciate. Well, except for the blind I guess...

Being a self-described “not corny loser,” I rarely get sentimental. There’s nothing inherently funny about a sunset pic, but last night was a laugh riot. I’ve never felt so conflicted. Moonlighting as a normal person I tagged my posts #viralsunset and cackled in between sips of my Budweiser. I did not want to stay lucid during the aftermath of The Sunset. I liked every single person’s images. This is a major Alt Fault, but I felt like my social media comrades and I were tucked snuggly underneath the same fuzzy gay blanket of inner connectivity for a few hours. It got dark again and it was back to the hell world that we are all used to living in. Just to feel a little something I grammed a pic of the sunset again the next afternoon to revive the feeling. It worked until the Likes tapered off.