The First Skirt I Looked Under 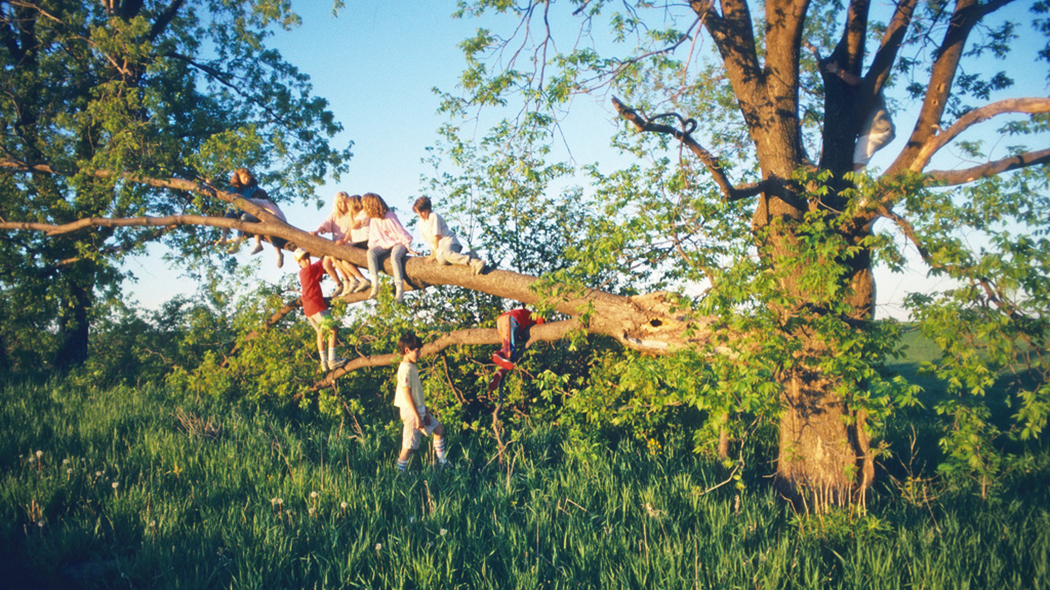 Kids have so much to teach adults, she said. Yet she taught me folk songs, plant names, and profound humiliation.

Few kids get to go to camp with their parents. At a small but ambitious arts colony in Western Massachusetts, where I spent two summers with my mother, parents were promised daily child care for their young ones, as well as the space to explore their own creativity with dance, music, painting, writing. For eight hours a day the adults disappeared into their studios and left us in the dubious care of Shelly and Mark, two counselors in their early twenties, who may have been engaged or may have been brother and sister. A lot of my memories of summers at Cummington are fuzzy like that.

I asked my mother recently if she remembered anything from our years of shared camp experiences.

“I remember that after a few days, you city kids looked like you were in Lord of the Flies. You were covered in bug bites, scrapes, your shoes were gone. You went wild.”

Even when they were present, Shelley and Mark spent more time arguing with each other than leading the kids in constructive activities, though we did manage to put on a play based on German folklore. In it, I played a character who was constantly described by her village neighbors as “plain as an old boot,” which I liked because she was also considered the most fun person in her Bavarian town, unlike her hot twin siblings, played by two svelte, blond campers.

With distracted counselors and parents caught up in their own work, Cummington was a place of delirious, delicious neglect. One of our favorite group games was taunting a lone donkey who lived in a field, getting it to chase us, then running to climb over the fence before we were kicked to death, nary an adult in sight. Aside from that one dangerous game, our world was less Lord of the Flies and more Lord of the Rings, but before the movie trilogy came out and made adventures in the mist look like it was only a game for boys.

The fantasies we constructed filled our days. Perhaps it was the subject matter of Shelley and Mark’s dramaturgic efforts, but the woods around the barn breathed with magic. Wearing capes we fashioned out of bedsheets, carrying huge branches as walking sticks, myself and a chosen few wandered down well-trod trails to fern-ringed clearings. There we arranged and rearranged carefully painted rocks, sent up prayers to the elements, and murmured spells that only children seem to know. If it rained, it was our doing. When the wind kicked up, it was the spirit of the forest speaking to us. I knew that I was a witch and the seeds of my enchantments would grow.

The children were housed in one large central barn, near the dining hall, while parents’ living quarters were scattered throughout the few acres of woods and meadows that were camp property. Bedtime was utter mayhem, as moms and dads trooped in from the wilderness to soothe the minor dramas of the day, though they were each laden with their own artistic temperaments that clashed with all the rest over everything from what story we would be read to shower protocol. More often than not, an adult would leave the barn yelling, slamming the screen door behind them. I have no memory of taking a single shower, so my mother must have been on the more laissez-faire end of the parenting spectrum. The creek was good enough.

The kids’ barn had an upstairs and a downstairs, with two or three beds per room. Some sections were roped off, considered entirely too dangerous for a child to enter at all, though we snuck up on one occasion and only discovered garbage bags full of moth-eaten clothes. We’d discover sometime in the middle of our first month there that every bed was also infested with lice, a persistent strain that would haunt some of us long enough to reinfect both kids and parents the following summer.

There was no age segregation among the kid campers. At nine years old, I had a crush on 11-year-old Alex, who was cool enough to hang out with 13-year-olds, Melanie and Tess. I made a few bucks for “baby-sitting” the six and seven-year-olds, whose parents wanted a couple more hours in front of their canvases, a chore which mostly consisted of playing four square inside the barn’s art room while my charges wandered off to throw rocks in the driveway.

Beneath the barn, in a separate room with its own entrance, lived a woman named Laura.

Again, I asked my mom about Laura, but she had no recollection of her. I hadn’t even thought about her myself for years, but once we started to speak about Cummington, her glowing presence leapt up like a flame.

“You know, she always dressed in bright colors, and she didn’t seem to have a kid, and she did all those drawings and etchings?”

Nothing, but the outline of her became more defined in my own mind. Laura. She used to greet me in the morning by telling me I looked like a flower. Her small barn studio smelled like sage and other mysteries, and outside her door we found a lizard together. There were other artists without children, but certainly none housed so close to the barn, and most avoided us as we spun wildly by them in the dining hall. Laura always said that kids have so much to teach adults, but she taught us folk songs – or perhaps they were inventions of her vivid imagination – one of which I still remember and catch myself singing now and then, when I’m in nature.

If the people live their lives/
As if it were a song/
For singing out the night/
Provide the music for the sky/
We’ll be dancing circles in the night.

She sketched tiny, elaborate drawings of ferns, and women dancing around fire pits. She completely appreciated my haphazard warlock look, and encouraged us to rub crayons over paper on the headstones in the nearby graveyard to keep a record of the unfamiliar dead. I don’t know what we planned to do with them, but a small collection of waxy paper built by my bedside, a name, a carved curlicue, a date. This reportedly angered the locals, though I never saw a soul visiting the graveyard who wasn’t from the camp.

If she came with us on a hike, I followed close behind, entranced by her knowledge of the flora and fauna we encountered, mostly salmon-colored newts which seemed to cluster under every leaf and branch, or sat, vulnerable and defeated, in the middle of the only asphalt road out of our enclave, which led straight to the Dairy Queen.

My crush on Alex I understood, and had the sense to be embarrassed by. What worldly 11-year-old would be interested in a 9-year-old who was portraying Old Boot in the camp play? The way I felt about Laura wasn’t something I could name, and that would be a pattern that would follow me into my teens and early adulthood. Queer kids often have to hack their own path through the woods, instead of navigating the well-traveled trails of heterosexual romance and desire. Often, I’d walk those too, meandering unthinkingly towards relationships with boys and then men. But always, always there was the glimpse through the trees of that elusive desire, the possibility of more, and the temptation to wander off and discover, and maybe never come back.

At nine, I had no idea what my jealous need for Laura’s attention and approval – the pleasure I took in in the simple sight of her, the sound of her voice – meant. One lazy afternoon, us kids were lolling around on the small lawn outside our barn habitat, climbing the scattered crabapple trees and eating the bitter fruit so we could complain about how disgusting they were. Laura had climbed highest of all. I sat, staring up at her tanned ankles tied with woven bracelets. I wasn’t thinking anything in particular, as far as I remember, but being a bad climber myself I was probably wondering if I’d ever be able to do what she could.

“Yes, I’m wearing underwear,” she suddenly yelled down at me. Melanie and Tess started to snicker.

I looked away, not acknowledging the comment, as Melanie and Tess whispered to each other while looking at me. I ate a terrible, tiny apple as nonchalantly as possible while my insides roiled with shame. It’s hard to say if I knew that I was embarrassed because Laura’s comment came so close to the truth – though I’d certainly not been trying to see under her skirt – or if it was the simple shame of a kid accused of being a creeper in front of all her camp friends. I’m sure Laura thought nothing of it.  That was the biggest humiliation of all. She didn’t understand me, or care for my feelings as I did for hers.

That’s where my memories of her end, for the most part. Summer came to a close, the city kids found their shoes and returned to their clearly delineated schedules and apartment complexes, bringing only lice home as souvenirs.

Soon after returning to New York, I visited my friend Samantha at her brownstone. Samantha’s mother was a writer, like my mom, and they had gone to Cummington for the first session of the summer. How we’d moaned and complained that our camp time didn’t overlap! But it was still exciting to think of getting together and gossiping about the place – the fun of ringing the dinner bell, the progress made on building the giant teepee, the difficulty of starting a fire in the dining hall fireplace.

And, of course, Laura, who for whatever reason was there for both sessions. Sam and Laura had hit it off as well, and I was shocked to discover that Laura had been writing Samantha letters, something she hadn’t offered to do with me when we parted ways at the end of August.

“Here, you can read one,” Sam said, handing me the sheet of paper covered in big, blocky script and tiny drawings. I don’t recall much of its contents, except for one sentence. I read it, trying to remain as impassive in front of Sam as possible. I suspect she knew what she was doing when she suggested I peruse her correspondence.

“The new kids are great, but none of them understand magicke like you do,” Laura wrote, twisting a knife in my heart across time and space. 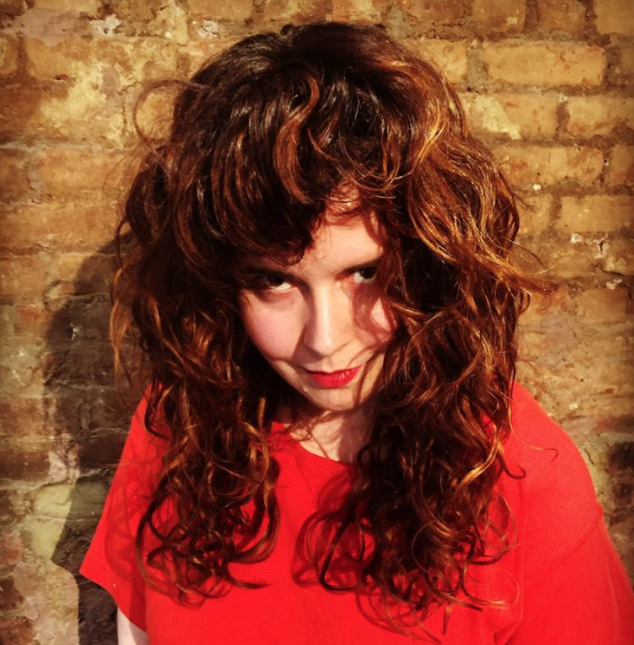 Aimée Lutkin is a freelance writer who has written for Jezebel, The New York Daily News, Someecards, and her own blog about dating after 3 years of celibacy, 2 Dates A Week.