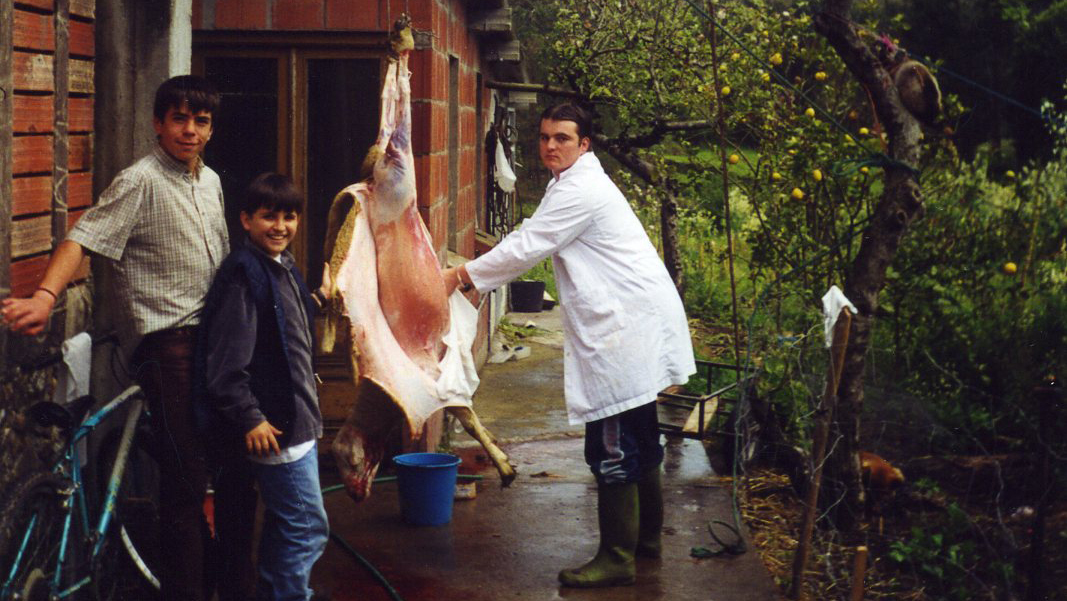 Photograph from the family album

There’s a house in Galicia in the northwest of Spain, near the Costa da Morte, where my great-grandparents raised their eight children. It has never been part of a town, albeit very close to two or three, and the hilly area surrounding it is now speckled with wind turbines, so its jurisdiction remains unclear.

The façade was originally painted white, then for a couple of years in the 90s it was salmon. Today the place is blue and home to my great aunt, Victoria, who is younger than my mother, her niece. During my family’s summer-long visits every five years or so, I was always the only one staying at Victoria’s. The homes of other relatives weren’t large enough to accommodate the four of us, and hers came with infinite backyard, so I would call dibs.

I spent most of my time with the animals. For every visit there were a different number of dogs, cats, chickens, rabbits, sheep, pigs, and calves. I remember the summer of their first German Shepherd, a mutt-terrier-looking dog, two Siamese cats, about eight sheep, and over a dozen chickens and rabbits. Another time there were no sheep but a calf and pigs. Then sheep and pigs. Once, a donkey.

I still call it a “house”, though – not a farm. Working the land seems to be more of a hobby than a full-time occupation for its residents – my great aunt and uncle, and, sometimes, their two children and their families.

But they don’t ever have to shop for meat.

With the exception of purchased or gifted cats and dogs, they eventually kill everything else they get, or that simply appears, on these grounds. Pubescent and bloodthirsty, I used to partake whenever possible unless it involved burying unwanted litters of kittens alive. Chicken and rabbit killings were routine every week; anything larger required a call to the nearest butcher – another of my grandma’s siblings – though his son, Lucas, would do, too.

Cousin Lucas is slow, like someone who can’t be bright, and no one ever bothered to find out just how or why that is the case. His father was the go-to butcher in the area before he died in a car accident, and for over a year after his passing, Lucas assumed this role in full.

When I was twelve, our visit coincided with Lucas’s solo butchering career. One morning I went downstairs to get breakfast as Lucas stepped into the foyer wearing a bloody apron. It had been a busy morning.

The pig was hung on its hind legs and weighed using a remarkably versatile system of pulleys. Suspended, its body length was larger than Lucas’s, who’s about six feet tall. It hadn’t been easy to lift the pig off the ground, but once it was upside down the squealing had subsided. I recall thinking, “it knows.”

Oscillating like a low-frequency pendulum, the pig had just emitted a few grunts when Lucas unceremoniously slit its throat and the grunts became squeals again. At once, the pig’s face became the backdrop for gallons of blood that gushed down into a large tin basin. Soon it couldn’t squeal anymore, and before it died there were just gurgling noises.

The blood kept coming, driving the dogs into a frenzy. This trip’s German Shepherd first dipped its snout directly into the three-inch-wide stream of crimson liquid and then switched to taking hurried sips from the reservoir below. A too-small part-Dachshund mutt frenetically circled the area counter- and clockwise, jumping every now and then, burdened by its aberrant constitution.

But the dogs shouldn’t drink the blood; the blood was for us. I was told to tie the German Shepherd and take the mutt inside.

I returned and my cousin had begun skinning the pig. In the strangest act of what I wanted to think was kindness, he excised the testicles and asked me to feed them to the dogs, one for each. Everything else was offal, he said. Including the tail.

Mom would agree, I thought. She liked to tell my sister and me that a pig is the only animal we can eat in its entirety. The feet, the brains, the thymus gland – someone’s cooked it somewhere! You don’t eat chicken kidneys or calf ears!

The pig’s abdominal skin was hanging like an open curtain, partitioned in half by Lucas’s vertical incision. Its peritoneum held most organs in place, while the thorax only safeguarded the heart and the lungs. Blood kept dripping into an almost full basin as I studied the porcine anatomy of its former bearer. The stench of viscera that slowly enveloped my cousin and me didn’t matter. Lucas invited me to make the next few cuts. 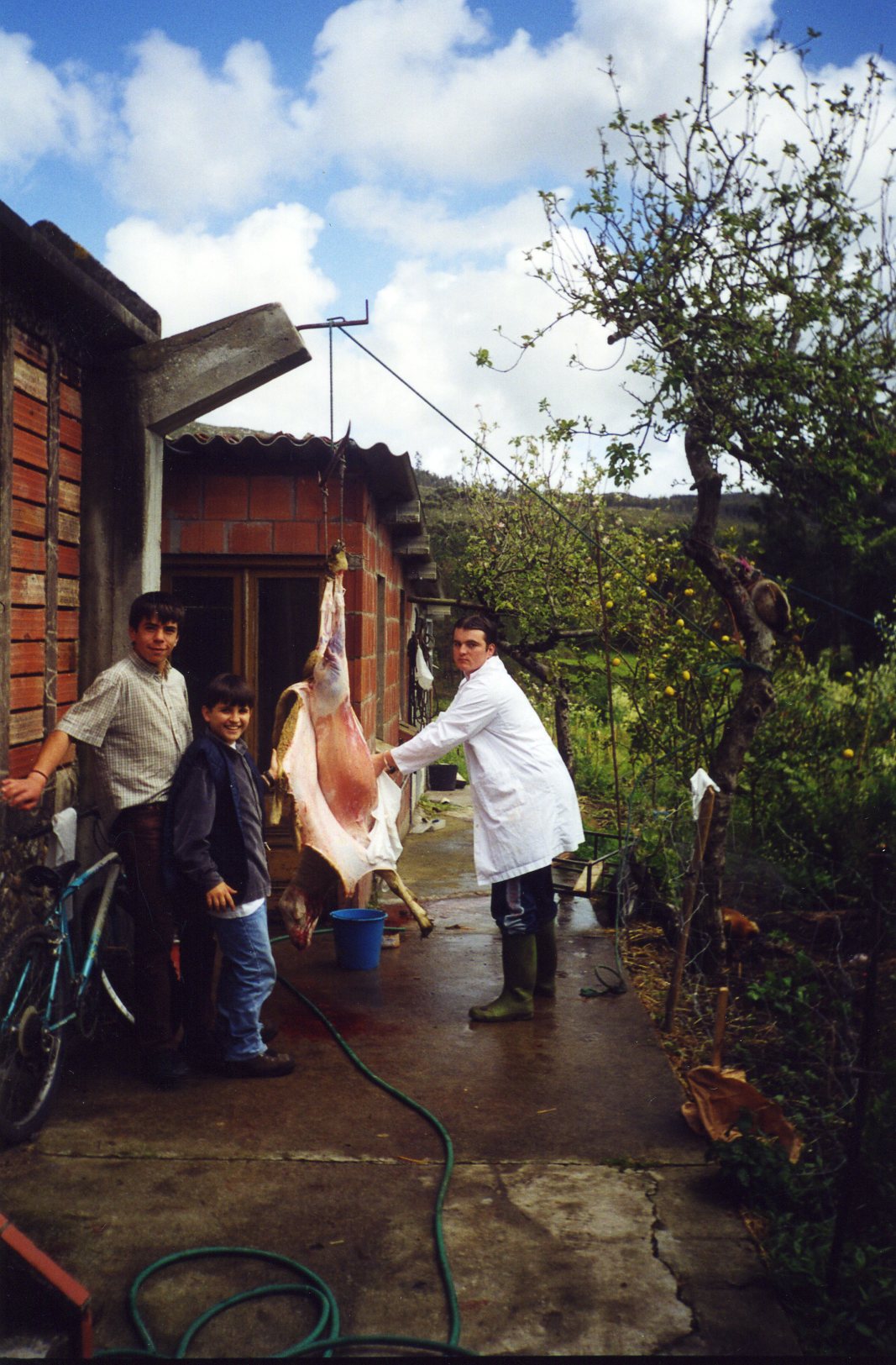 That night we had black crepes for dessert; they had blood in them. The next day my great aunt and I made blood sausages and threw the remaining blood away, a waste.

Somehow a year later we were visiting again. I wasn’t used to everything being exactly the same it was during the previous trip, so it was with disdain that I fed the previous year’s chickens leftover cake made with their own eggs and took the previous year’s sheep to graze on the hills around the house.

But even though this herd was old news, the shepherding was always a curious thing to me. There were nine sheep that summer and not once did one ever attempt to deviate from every day’s path to the hills. Every morning we would walk from the barn in the backyard to the road in front of the house through the garage, herd divided into two woolen streams around my great aunt and uncle’s cars. We would walk down the road, which was lined with nothing but pastures, and through the woods uphill.

If I brought a dog, it was for show.

I liked to choose a different clearing every day. All I had to do was stop walking in a sufficiently green expanse and I could leave the sheep on their own until sunset.

A lost ewe joined the herd on a Monday. Its coat was so long and bedraggled it stood out even under the sunset light. It had a limp hind leg and scratches on its face. It must have gotten lost weeks ago and encountered some wild animal, probably a fox.

When it followed us on our way back to the house, I realized we’d be killing it the next day. 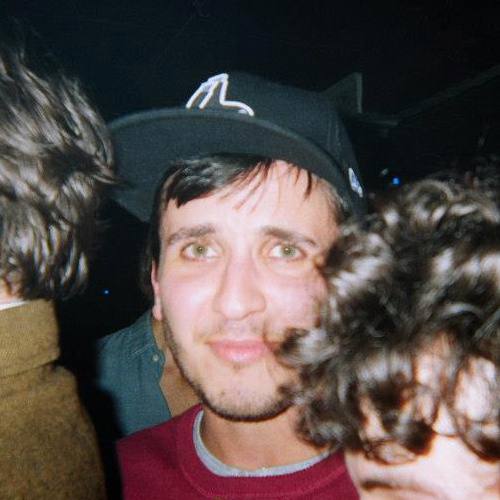 José Durán lives in New York. He is a graduate student in physiology who seldom writes fictionalized memoir.