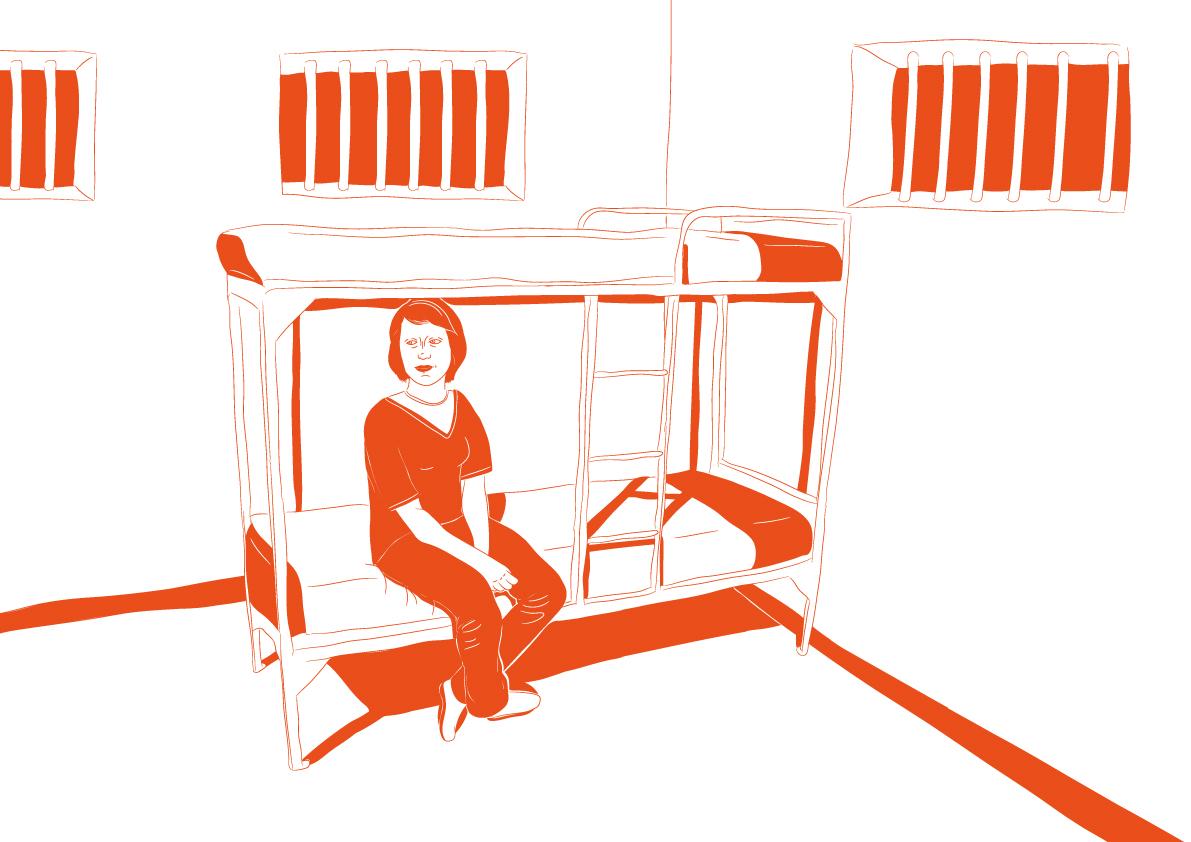 Reflections on Orange is the New Black

When I was released from jail, I searched the internet for news stories about my case, curious what kind of mark would be left on my name from the four months I had served.

The local paper in Minneapolis had written an article titled “Stuck 3 months in Iowa jail for refusal to testify.” The story was fairly sympathetic, quoting both of my parents and my lawyer, and referred to me at one point as a “hero to scores of animal rights defenders around the world”. The comment section, however, was full of diatribes about my terrorist affiliations and assertions that I should rot in prison. Nestled amongst them was an enigmatic quote posted by my mother:

Gradually it was disclosed to me that the line separating good and evil passes not through states, nor between classes, nor between political parties either, but right through every human heart, and through all human hearts. This line shifts. Inside us, it oscillates with the years.

It’s a quote from Alexander Solzhenitsyn, about his experiences in a Russian prison. My mom said that she believed I had learned this during my time in jail.

She was right. People in prison are some of the most heavily classified and marginalized in our society – losing their very names to the categories of “inmate,” “convict,” and “criminal.” I went through that process of dehumanization with women from backgrounds totally different from my own, and in a strange way it reaffirmed for me our shared humanity. I was able to see that people are just people, and they’re just trying to get by as best they can.

Piper Kerman, author of Orange Is the New Black – a memoir about her 11-month stint in prison – seems to have learned a similar lesson. Kerman’s memoir has recently been adapted into a TV show of the same name. It follows the story of Piper Chapman – a young, liberal and class-privileged woman who gets sentenced to a year in prison for having smuggled drug money ten years prior.

When I first heard about the show, I was skeptical and almost didn’t watch it. I hadn’t heard of Kerman or her memoir. I knew that the popular imagination around prisons is full of stereotypes, and I wondered how much a mainstream TV show about a women’s prison would play that up. I assumed that whoever was behind the show would have done research about prison to make it  “realistic,” but would fundamentally not understand the experience. I often find it hard to consume media about something that I’m very familiar with because it becomes glaringly inauthentic. I feel like an actual pirate watching Pirates of the Caribbean. Or anyone who’s ever been to a summit protest watching The Battle of Seattle.  I decided to watch the show anyway, mostly out of curiosity.

By the first episode, it was clear to me that the show was being influenced heavily by someone who had been through prison.  One of the first times this becomes apparent is when Chapman corrects her fiancé that she is going to prison, not jail. Being in jail made me very aware of that distinction, and now I can’t help but correct people when they conflate the two. Piper was in prison; I was in jail. Jail is where you go when you are first arrested, while awaiting trial, if you receive a very short sentence, or if you are, like I was, being held for an indefinite period of time as a coercive measure to elicit testimony. Jail is characterized by its impermanence – rarely are there classes or activities beyond a basic recreation room (which, in my case, was just an empty room with a yellow circle painted on the floor). Prison is where you go for the long haul. And that’s where this show takes place.

I related to Chapman because we were both misfits on the inside. About 2.9% of the adult population in the U.S. is under some kind of “correctional supervision” – that includes jail, prison, probation, and parole. That’s a lot of people. There are communities across the U.S. that feel that number much harder – where incarceration is a part of people’s daily consciousness and lives. Me? I can’t name a single person in my family who’s been to prison. Sure, I run with a crowd mostly composed of anarchist hoodlums and radical ne’er-do-wells, so I’m a little more hip to that system than Chapman, but in the end our place in the world is pretty similar: we don’t “belong” in prison.

This is where a critique of prisons holds its most radical potential: to understand what is unjust about our prison system, you must understand what is unjust about our world. A system of mass incarceration necessarily reinforces inequality in a larger society. While ONB doesn’t address this issue explicitly, it shows stories of women who are forced back into the prison system by their lack of resources and support in the outside world. Even in my four months, I saw women getting out of jail and ending up right back inside in a matter of weeks. Some would make grand plans for turning their lives around, but others knew from the start that they had nothing out there. One woman that I was in with was serving 30 days for shoplifting. She had been homeless since her boyfriend was deported. There was a man she had been staying with, but he had started to make it clear she would have to sleep with him to keep staying there. She had alienated her family by stealing from them, and wasn’t welcome there. Once she told me that she was better off in jail than anywhere else – at least she knew she had food and a bed to sleep on. You can’t fight the injustices of prison system without fighting the poverty, racism, and alienation that put people in prisons.

While the show devotes a lot of time to the stories of the inmates that Chapman is serving time with, it also focuses a lot on Chapman’s relationship outside of prison. I didn’t find her fiancé’s character very compelling, but I did relate to the show’s depiction of the way that prison affects your relationships with the people you love on the outside. One scene in particular struck me: Piper is talking to her cellmate, who hasn’t had a visitor in all the years that she’s been in. The cellmate asks what it’s like when her fiancé visits, and Piper quickly responds, “it’s good!” but after a pause adds, “it’s weird” and says that sometimes it feels like there’s never enough time, but sometimes it actually feels like there’s too much. We are affected so much by the people we are around and the environment we are in. Prison has this insidious way of becoming your whole world. Suddenly, the most important thing in your life is the guard who has it out for you, or the new regulations, or the mysterious chicken running around in the prison yard. It can become so hard to relate to people who, not being part of that world, can’t really understand it – even if they’re the people you related to most in what you consider your “real” life.

This process of being pulled out of my comfortable world brought me face to face with the truth of just how subjective our experiences are. Many people’s lives were so different from mine that sometimes it was hard to even communicate. Once, a few cellmates who were serving time on meth-related charges were talking about the process of making the stuff, and kept mentioning a chemical that they would steal from “the co-op.” In my head I was picturing a pricey grocery store full or organic foods, and I could not figure out why they were getting chemicals there. Finally, I remembered seeing buildings on road trips that said “farmer’s co-operative” on the side, and realized that was what they were talking about.

While we had so little in common on the outside, we did share that experience of struggling to maintain our humanity. For three months, my closest friend was my cellmate Stacey – a mother of four from small-town Iowa who was about to be sentenced to 17 years in prison for manufacturing meth. I can’t imagine another scenario in which we would have even met, but I still count her among the most important people in my life. It would take another essay to tell the stories of how she stood up for me, how we supported each other through the hardest times, and how we found the silliest ways to hold on to our selves and our stories. Relationships like that, which cut through the boundaries of our constructed worlds, challenge us to examine our assumptions and comfortable realities.

The last time I visited Stacey at FCI Waseca, I talked to her about the show. She hadn’t seen it, but she had read the memoir that it’s based on. When I talked to her about things that are different between the show and the book (for example how, on screen, Piper is given a bloody tampon in her breakfast sandwich after accidentally insulting the cook) she laughed and said that was pretty unrealistic, but that she’d bet it makes great TV. It’s true that in the show, situations and characters are flattened and exaggerated for an extra laugh and a little thrill. But the show adaptation is a mainstream dramedy, not a memoir. It reaches people who would never pick up a book about a woman’s real experience in prison. And it conveys the story with an honesty and empathy for prisoners that is unheard of in mainstream “entertainment.” 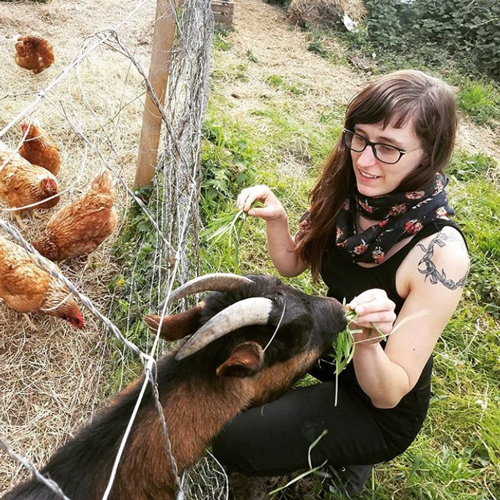 Carrie Feldman was subpoenaed in 2009 to a federal grand jury in Davenport, IA, investigating animal rights vandalism. She refused to testify and was jailed for 4 months on “civil contempt of court”. When she's not rabble-rousing or baking, she drives a bus for an organic food share collective and crunches numbers for local nonprofits.