Trans Day of Revenge, the Album, Is Here

through the looking glass Artist and performer Bunny Michael gets real about the Higher Self, splitting personas, and why she doesn't do anything just for money. 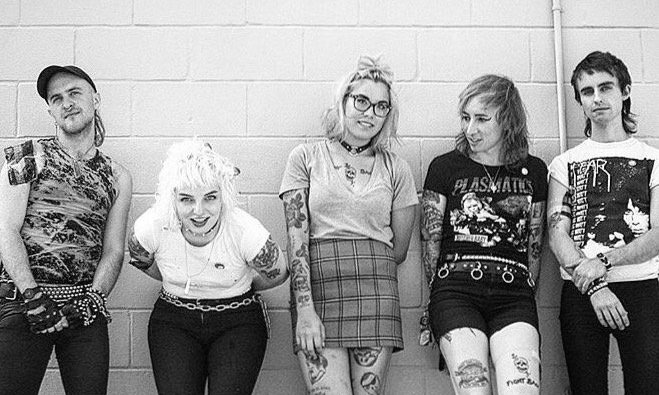 Are You Ready for Trans Day of Revenge?

The day after the shooting in Orlando’s Pulse nightclub, I found myself scrolling by the sentimentality growing across the internet, the photos circulating of the 49 dead Puerto Rican and Latino queer people at the hands of Omar Mateen and the police, the speculation about Mateen’s religious affiliation and sexual preference. I stumbled across a link my friend had posted and hit click. It was the Bandcamp for Olympia-based hardcore band G.L.O.S.S.’s latest EP entitled Trans Day of Revenge, I hit play. Emanating from my shitty computer speakers blasted the screeches of the first track "Give Violence a Chance", harsh drums and fast guitar riffs, circulating around the screeched vocals.

Trans Day of Revenge starts by rejecting the idea that there is such a place as safe, and moves forward from there: they tackle assimilation, pacification, and the idea that queers should be voluntarily involved in the justice system ​at all​. Their lyrics — for example, “Chicks with dicks kill from the heart, untamed women, scarred by men, we break the cycle with revenge” — are not just calls to contemplate or remember trans and queer folks we’ve lost, it’s a war cry for rebels who are still here.. In addition to their boisterous politics and rejection of respectable and digestible forms of grieving, the EP is in fact dedicated to Olympia punk Adan Parker, who died in November 2015. Refuse defeat, get into G.L.O.S.S..

You can listen to the full EP here: