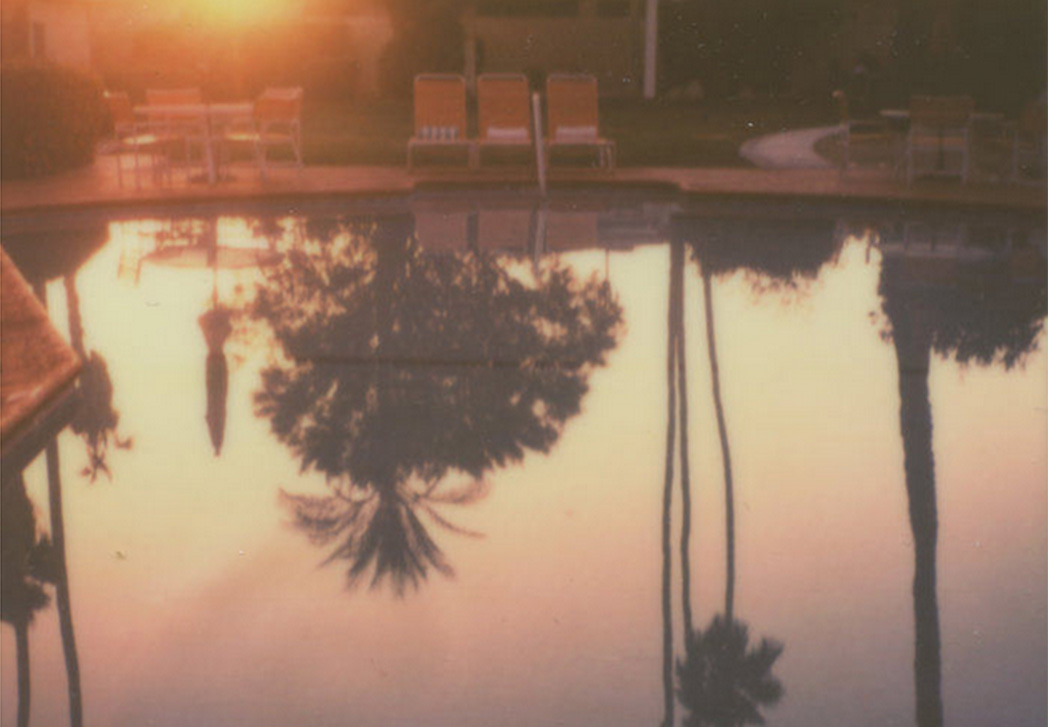 A slow-burn romance on a steamy roadtrip through the Californian desert. An indebted friend and a Range Rover stuffed with weed. A 25-hour drive and all their problems will be solved.

In the transitional season after Thomas broke his eyeball, we went to the desert. We flew into Los Angeles on two separate aircraft, a ticketing mistake, which departed in tandem and arrived together at sundown. Bunny was waiting for us at LAX, leaning on the bumper of her white Range Rover in a no-stopping zone. She was, or so it seemed, the only living person in downtown LA, inhabiting a new and cavernous high-rise that boasted loft-like layouts with none of the pestilence. We had anticipated at least chopper noise, at least the uninterrupted static of traffic, not the flat darkness nor the silence that was only filled with wind. Walking to find a bar that would serve us, we were spooked by the shadowy streets. In the dark, with the lone bartender, we cheersed our fear. Driving several climate-controlled hours into absurdist desolation the next morning was a relief. We followed the interstate away from the coast, passing roadside rest houses and turbine farms, supermarkets and nail salons and boarded-up carcineras, straight into the heart of an alien landscape where, just beyond the irrigated golf courses, ambitious sociopaths were being tried for a first manned mission to Mars.

We floated on the blacktop. The white car gleamed in the white sun. The airwaves were jammed with signals, rendering useless our little broadcasting adapter. Bunny’s only compact-disc, a high BPM workout mix, looped on migrainous end. Palm Desert was an oasis, and our hotel an impressive zebra-print glitch in the illusion. Plastic chandeliers hung from velvet-black ceilings. Elizabethan armchairs in full acido dorado color stood askew in every corner. The carpet was zebra, too, straight up to our white door, keyed open with a swipe, our suite revealed with its view of nothing but atmospheric distortion. I do, truly, feel like a drug dealer here, Bunny said before she vanished, her duffel bag claiming the queen bed in the corner. I could hear a faint pulse from the courtyard swimming pool, the shouts and splashes of the midday mojito-drinkers. Thom undressed languidly and came to stand behind me to press a cold beer into the small of my back. When I turned, I could see his pupil shiver, the traumatized muscle around it marbling the original hazel into grey-blue, the encroachment of tundra as seen from space. I peered for little deer, galloping caribou, the pack of wolves that had catalyzed their flight, distant northern lights. I reached for the beer and drank it. I stripped to my underwear in neon hue. When we were done with having at each other, I went and watched for coyotes from the window, goose-bumped by dusk’s premonitory chill.

Bunny rang from somewhere to say we were to wait a while longer, her voice socked in by silence. Conveying her message to Thomas, I watched for irritation, but he only proposed a walk around the back of the property, away from everybody. Sound did not carry far in the desert – did not follow us through the unmarked glass doors or the garden or the low chain-link fence painted green, did not float on the invisibly jammed atmosphere to tail us to the red-clay tennis courts where Thom, aroused by the infinity around us, would take me on my back with his jeans around his knees, staining the white tips of his Chuck Taylors iron-red in the dirt. I came looking at his shivering eye and held still, with his arm encircling my neck, to tilt my face to the sky and the landscape around us, the hills and the outsize boulders bringing to mind the prehistoric modernism of a Flintstone home. When we woke, it was nearly dawn, the sky lightening in shades as a lone flashlight beam did its threatening dance in the distance. The lighter sleeper, Thom had shaken me alert – and we ran, our footsteps muted, back the way we came.

Thomas and I loved each other through trauma and boredom. After meeting in the city, we moved in together almost immediately, up to a little light-box in the sky. He was tall and lean and quiet, prone to fistfights after drinking and lashing me with leather belts in a way that I wholly enjoyed. Bolstered by our compatibility, we were often antsy and for the most part misanthropic. I’d call him up from parties just to tell him, “I hate everyone here.” One weekend we drove to the mountains to try and count the rehab centers with their euphemistic signs for wellness, hidden away amidst the trees and the hermit-houses. When girls got sent to rehab growing up, I said, I always thought they’d be sent to Arizona, or California, where everyone’s moms had second homes. Not a wilderness like this. Thomas looked at me sidelong and didn’t say anything, listening to my monologue and the radio as we followed the road.

Our transience made me literally sick. I napped uneasily riding shotgun, reeled apart from the vehicle whenever paused roadside as if on a listing ship. Getting word to lie low was an opportunity to replenish. Stretched belly-down in our hotel room I ate blueberries, avocados, tough leaves of kale, bread soaked in the oil of Californian olives, reading the Scientific Americans and National Geographics I paid for with laundry change. We had four or five days on solid ground, every outward venture looping back to the lock’s heavy click. Some nights, Thomas would build a fire in the empty lot behind the complex, dragging loose cinder blocks to form a half-octagonal pit. So competently did he crumple the pages, strip the timber, scavenge for dead and flammable material in the desert, and light the match that’d set the flame crawling along the paper and into the criss-crossed heart of the bleached branches that’d remind me of what collected in the alpine ravines of our hometown: bone-white sticks in the sucking, black mud, the glacial trails one could follow to the summit and survey.

He went and I waited. I glanced at the off-white telephone as I cycled through the channels on the hotel room TV, ordering pay-per-view pornos when I felt like it, drinking can after can of light beer, idly texting with variously-met men back home who’d make me feel fuckable, anyway, even when I was getting enough. Sexed chatter with near-strangers was a compulsion that grounded me in a deluge of action verbs and anonymous imagery. And who wasn’t into perpetual fantasy? When Bunny finally called, interrupting my coitus reverie, I was drunk and she irritated by my mental truancy. It is not my fault, I hissed, that you took it upon yourself to switch my career up. To drug mule from gallerist. I would hope that you’re sorry.

Don’t be an idiot, she said. I could blearily picture her driving on pre-dawn’s empty highway, smirking and smoking a tightly-rolled spliff with the windows down. A gallery assistant is not a gallerist. And you’re not a mule, you’re a facilitator. You’re helping a good girl out.

There were fifty pounds of vacuum-sealed Purple God indica sewn into the seats and bolted under the carpets of the Range Rover. A small job, chump change, no borders, just state lines. A harebrained scheme born of one too many Adderall all-nighters, so that Bunny could pay off, in one fell swoop, the loans taken out to fund her exorbitant education. And the Range? I asked. The Range was a gift from her mother.

Thomas returned with a little handgun and a fake license in a plastic bag with some mangoes. We left the gun and ate the mangoes, listening to the crackling silence of the desert night. I wouldn’t even look at the handgun, with its efficient, human-scale detail. I gingerly wrapped it up in a t-shirt. You? He mocked gently. You who thought you were so tough. My beautiful Thomas who only wanted to see the desert of his dreamscapes and the crippled trees reaching up. Who had a taste for adrenaline – racing in full-face helmet down a mountain slope, leaping spread-eagled into the ocean from a clifftop – but not for real danger. It was up to me to keep youth’s stories close and detailed with remembering, alive in the retributive era post-revolution. Kept awake by the ghosts of daddy’s firearms, driven to school by his bodyguards. Yet I was always softer, always unwilling to take a risky action to the end.

I’m going to leave the Range with you, she said. Just drive it to Iowa. Put the cash back under the rugs. I’ll meet you back in Palm Desert. We can have some fun. We can party. It’ll be a festival weekend. The mansions out here. The swimming pools – You’ll love it. And you can take your cut and do whatever you want with it. You and Thom. Get a suite. It’ll be romantic.

Your mother’s gift, I said. Just to be sure. You are letting me drive this gift to you, stuffed to the gills with California’s finest, to the middle of nowhere so we, mostly you, can profit. Because you read somewhere sometime that they’d pay the most. And you’ve supposedly got a direct line.

Yeah, she said, unfazed. Listen, I’ll text you a number. When you get there, call it. Someone will come pick it up. Jeff. He’s a friend of a friend. He will give you the cash, take the car, bring the car back. Remember, do the exchange at the same time. That way, nobody gets screwed. I’ve seen it in the movies. If anything happens, call me.

This is a terrible idea, I said. She hung up.

I went through all possible outcomes in my head, standing too long in the next morning’s shower. Already, I could feel the build of the sun coming up fast over the desert, the wide span of its searing heat. I took inventory of what we had left: two iPhones and a duffel bag, bottled water, a wrinkled t-shirt, a gun, the Range Rover that was visible from where I stood, shining NASA-white on the tarmac. It wasn’t at all difficult to visualize our trajectory along the miles and miles of American blacktop, winding through the serpentine canyons of Utah, the powder-blue ranges of Colorado, the rural flatness of Nebraska, all the way to our destination – the uncertainty of the drop. It would take twenty-five hours, barring accident or disaster, if we drove non-stop. 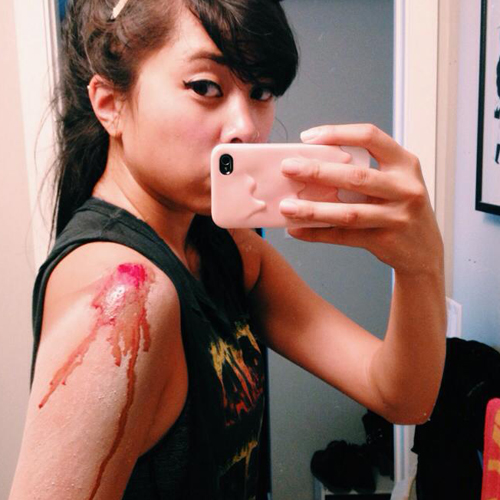