Probed! We spoke with artist James Moore about his particular brand of propaganda as it exists within his installations.

March Horoscopes This month we have a glut of planets in Pisces, the sign of blurred boundaries and imaginative leaps. 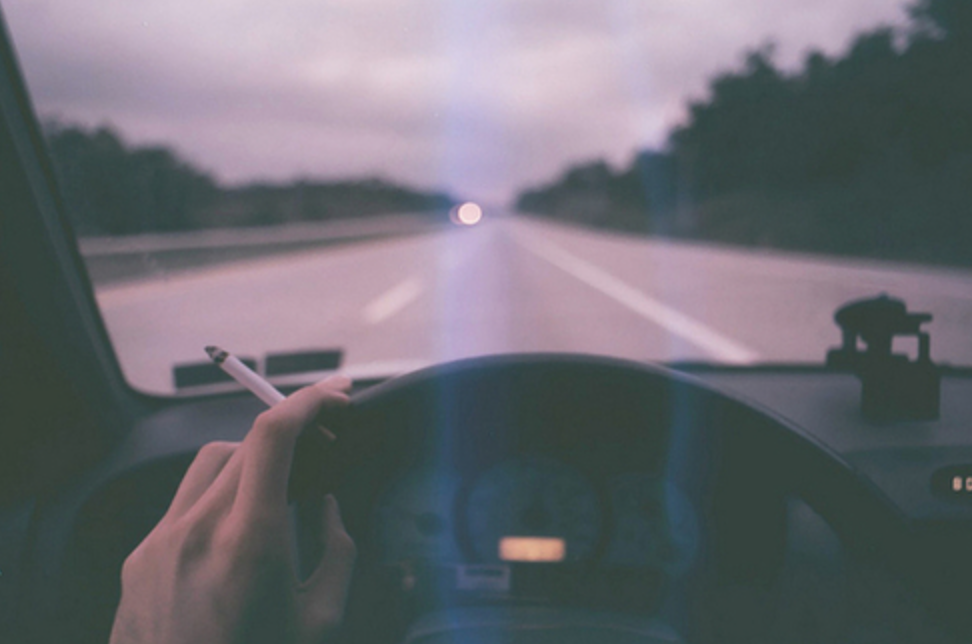 Sometimes you drive across the country to meet up with a lover only to learn that their feelings have changed.

Lorenzo looked over his shoulder and asked if anyone was watching. Nena furled her brow at a menu card, announcing that “wet bottom” pie wasn’t a thing. In a booth near the corner of the diner a heavyset man in suspenders sat, motionless, staring at us. “No one is watching,” I said. Lorenzo rolled a joint and stowed it under the brim of his bill cap. The waitress returned, delivering a large, chocolatey wedge and three plastic forks. She stood at the edge of the table, pawing at her apron. “That will be all,” Nena said, rubbing her hands together. We ate in silence and I stepped outside for a cigarette.

Across the parking lot I saw a police officer bent at the waist, peering into the backseat of Lorenzo’s car. I started to traverse the lot, thinking about what he might be looking at. For the entirety of our trip the backseat was my domain; Lorenzo insisted on driving and Nena rode shotgun, naturally. I wondered if the cop could see the roaches in the ashtray, or the baggie of Adderall under the emergency brake. I wondered if, from outside the vehicle, he could smell the half-o of marijuana in the glove compartment, or if he would look inside the trunk and demand that we open Lorenzo’s aluminum suitcase, about which I was not allowed to ask questions.

I realized the cop didn’t worry me. I believed that I was going to make it to New York, even if I got thrown in jail for a night. It would only be a minor delay on the way to Larson, the boy I could not stop thinking about. I knew I wasn’t infatuated with him because we only ever had sex the night we met. We spent the next five months doing everything else that people who have sex do. By that point, I’d been turning tricks for six years and had since forgotten how to have sex when it wasn’t an exchange for money, shelter, or drugs. I dropped out of my writing program for him because I wanted to have more time to dote, to lay in overgrown fields reading poetry and eating crackers. Loving him was easier than acknowledging the fact that I was jobless, penniless, and unstably housed. So when he took a gig teaching English on a remote island, I panicked. It was going to start three weeks after he moved back to New York. I asked him to stay in the States, and he told me to just come visit him in New York. “You can stay with me,” he said, “and we’ll just have a few weeks to ourselves before it’s all over.”

The cop could have taken everything I had – a satchel with some cash, a legal pad, a tin of peppermints, some clothes – but the only thing I stood to lose was time. I walked up to him and said the most provincial thing I could think of, “howdy!” In the reflection of his aviators I caught a glimpse of how provincial I wasn’t: my gaunt arms jutted from the sleeves of a dirty cotton blouse, and my hair, dark and greasy, appeared to be held back by multicolored turkey feathers that had been glued to a headband.

“Looks like an office back there,” the cop said and pointing to a stack of papers in the backseat. It was my diary, or rather, an extended love letter for Larson. I’d been redrafting it on the way to him and almost reached my hundredth leaflet of scribbles and sketches. They were scattered on the upholstery as if a paper nest for a puppy to pee on. “Where you folks headed?” the officer asked.

“Figured,” he said. “I seen your plates and wondered.” He walked up to me and placed a hand on my shoulder. “Drive safe now.”

As he walked towards the diner I saw Lorenzo and Nena appear from inside. Nena was crying, walking away from Lorenzo, and wrapping a scarf around her head. She buried her face in my chest, sniffling, and declared “Pennsylvania is full of hicks!” Lorenzo opened the car, got inside, and started the ignition without saying anything. He didn’t seem to notice the cop pass him. I decided not to tell him about about it. He was prone to outbursts. Passing through Wisconsin we lit up behind a rest stop and when a cop pulled into the lot Lorenzo seized up, yelled at Nena, and commanded us to get in the car.
Lorenzo was on his way to the Bronx to move in with his ex-girlfriend, a girl with a reputation for speaking in one-word sentences. Nena was mostly uninformed about their history. Lorenzo talked fast. He was stout Brooklynite who worked for a hip-hop record label in Manhattan. His father had recently died, estranging him from the rest of the family but leaving a small fortune. In the town where I lived Lorenzo was known for throwing a series of lavish, drug-fueled parties. By the time we set out for New York, all that was left of the trust got spent on something that could fit in an aluminum suitcase. Nena was a Colombian ballerina, the daughter of a gynecologist and a movie producer out in the Bay. She started dating Lorenzo around the time his trust disbursements began. A combination of their charm, connection, and cash flow quickly elevated them to the toast of the local underground. Driving across the country with them was an endlessly ceasing cantor of fighting and fawning, punctuated only by the silence of joint smoking.

By the time we reached New York we were exhausted. My once white blouse had been permanently stained at the pits. Lorenzo’s bill cap, now tilted down at a violent angle, concealed his bloodshot eyes. After he parked the car I unloaded his luggage onto the sidewalk. He shoveled empty Red Bull cans into a grocery bag as Nena, perched atop the suitcase on the steps of a brownstone, began an elaborate stretching routine. In the window above her, peering from in between the folds of a frilly pink curtain was a girl who looked identical to Nena, petting a cat.

I gathered my things and bid farewell to the couple as they disappeared into the house. The sun was setting behind the Grand Concourse as I dashed to the subway. Larson had asked me to meet him at a bar on the Lower East Side. By the time I emerged from the station it was night. I took a moment to organize my diary leaflets under a streetlamp. When I entered the bar, Larson was stirring an empty whisky tumbler. He saw me and smiled feebly, swiveling on his stool. Suddenly I felt limp. I wrapped my arms around his tiny body, sighing. I pulled back to look at him, holding him by the shoulders. He was a comforting simulacrum to the muse of my road writings. His face was still small, rounded, flush, and covered in a minute fuzz; to me he looked and smelled like a nectarine. But in his eyes I saw something troubled. They were smaller, sunken and red. They looked as though they’d been lifted out, dipped in acid, and dropped, scorched, back into his skull. I knew what he was going to say and could not bring myself to stop it.

“I’m sorry to make you come all this way,” he muttered, putting his jacket on, “but it’s over. I can’t be who you think I am.”

I suppose I could have asked him what I was supposed to do next, where I was supposed to stay, but I knew he wouldn’t have an answer for me. I watched him walk out of the bar and hail a cab. My mind raced. “Can I get you something?” the bartender asked. I reached into my satchel for my wallet, but instead nicked my finger on the edge of a diary leaflet. I left the bar and looked for him outside. He had already disappeared. I felt as though I might pass out from a sharp hunger. It was strangely quiet. I shuffled out into the middle of the street and looked back through the window of the bar. People were drinking and laughing in a warm light that spilled onto the sidewalk. Before me the massive road narrowed until it was no more than a caret pointing to a collection of lights that stared back at me like eyes in a dark wood. The summer air was thick with a trash and urine mist that tightened my throat. I grabbed my belly as I shuffled forward, setting my face to the Bronx, where Nena and Lorenzo lay sleeping.