Emojis Will Get You Anywhere

This Week in ACAB: A young man bit a cop’s finger while in police custody, and other stories from the field.

they don’t call it fall for nothing. get inspired for autumn looks that pair thrifted pieces with designer gems when you least expect it. 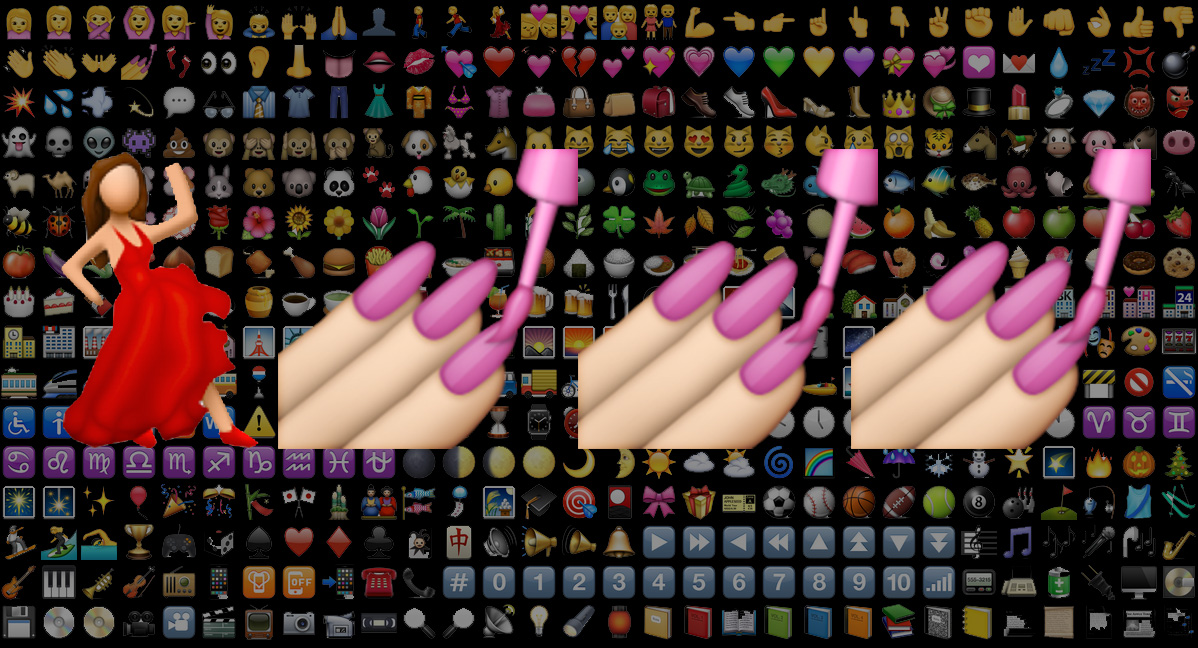 Emojis Will Get You Anywhere

Do you know your emoji linguistics?

My most frequently used emoji is the dancing girl in the red dress which I use as a response to, “What do you want to do tonight?” (dancing), “I really liked your piece” (thank you) and “how have you been?” (on top of the world!). I haven’t been using her long but I’ve already got into heated arguments defending her chosen style of dance. Everyone says she’s a salsa dancer but I know she’s kicking up her flamenco skirt. People communicate with emojis the world over, and yet their use is still largely person or culture dependent. Canadians love their poop emoji, Arabic speakers are partial to flowers and plants, and who among us is surprised heart emojis are employed four times more by the French than anyone else. Where did emojis come from? And how did they become a symbol we all recognise and use?

I’ve only been using emojis for the past year, but they’ve been around a lot longer than that. They were first developed by Shigetaka Kurita in the late 1990s when he was on the team preparing the release of NTT Docomo, the world’s first major mobile Internet system. Kurita modeled his first emojis (the word derives from the Japanese for ‘picture letter’) on weather forecasts’ use of symbols to convey information to audiences without language, and manga which often uses symbols to transmit concepts that couldn’t fit into the format of a comic, such as a light bulb denoting inspiration. It is quite amazing that we have reached a stage with pictorial communication where a single image, such as a set of nails being painted, can relay a complex emotion like “non-caring fabulousness,” “shutting down the haters” or, within my immediate circle, “it’s too late to reply to my sext now, but you would’ve thoroughly enjoyed my company”. Charming and unique cultural distinctions are preserved despite emojis’ universality, which is a concern whenever a language strides into imperialist dominance.

As we learn more about the world and the people in it, our desire to communicate across linguistic and cultural barriers grows. I am perpetually bemoaning that I can’t have a cord inserted into the back of my head Matrix-style and wake up fluent in every language spoken in the world. Or why I can’t be Doctor Dolittle but instead of animals I automatically understand everything everyone says all the time. (Admittedly, as an ESL teacher I’d be out of a job, but I don’t really like working anyway.) I’m not the only one who longs for global communication. In the late 19th Century, LL Zamenhof set about creating a universal language, Esperanto, which is currently spoken by 2 million people around the world. This is an impressive number considering the time, cost and effort required for learning a language which has no national home where learners can immerse themselves in it. In comparison, emojis have in a handful of years become the foremost globally shared communication tool, and is currently used by 2 billion people worldwide. Perhaps this is because, as opposed to Esparanto, which was derived from the Roman alphabet putting readers of other alphabets at a disadvantage, emoji are based on images people around the globe can recognize. I use them to teach my beginner English students adjectives to describe emotions, food, clothing and so on.

Before emojis there were emoticons, a set of letter, number or symbol keys, which when ordered in a certain way created a pictorial representation of an emotion or mental state. Online chat had up until then been a guessing game where you were presented with the typed out thoughts of the person you were speaking to with no indication of how those thoughts were intended to be interpreted. Often depicted with animal faces, emoticons were a way of varying the stark and near unreadable tone of online chat as as far back as 1986. Users were able to communicate whether a sentiment was intended to be read with humor, as anger or with sadness indicated by a single apostrophe teardrop (:’().The majority of the more complex key configurations did not make it into widespread usage (save everybody’s favorite shrug ¯\_(ツ)_/¯), but the translation of the upright animal faces into simple sideways expressions is still used today. The ubiquity of “smileys” has proved indispensable for generating greater understanding in text-based communication where tone, volume and intention are hard to read. They have also played a role in easing face-to-face communication for people with social disorders such as autism, as described in Daniel Tammet’s memoir Born on a Blue Day.

One of the fears in creating a global language is that it will reinforce the power of the dominant linguistic group (Zamenhoff’s Esparanto has been widely criticised for being based on solely European linguistic structures). Another part of this is that the unique cultural and personal variations in linguistic interpretation, which are fundamental to identity creation, will be lost. As emojis which are pictorial depictions of sentiments rather than words, they seem to preserve and even enhance these differences, allowing for users to maintain their cultural identity whilst still communicating effectively interculturally. (It would be interesting to know how many Canadians are aware their beloved poop emoji symbolizes good luck in Japan.) The father of emojis acknowledges the charm of some of these (mis)interpretations finding humor in a man interpreting a heart emoji as an indication of romantic intent where the woman intends it solely to express friendship. This shows that while we all more or less understand what the picture of a heart means, it’s still very much open to us how we use them. (I definitely overuse my hearts, and so I am constantly having to delete numbers from my phone in embarrassment.)

A far more pressing fear about pictorial communication is that it endorses the image of what is considered the norm or most prevalently recognized group on society. The overall whiteness and heteronormativity of the humanized characters has been widely derided, sparking The Unicode Consortium (the nonprofit organization tasked with updating keys and symbols available on computers around the world) to release a broader set of emojis complete with variations in skin tone and groupings that appear to subvert traditional hetero-dominance (these potentially romantic duos are currently under investigation by Russian authorities to see if they violate the country’s ban on “homosexual propaganda”, because, you know, cute little computerized cartoons are definitely harmful to children). It seems that as long as there are smart cultural critics who are willing to voice these issues, we can move towards a more widely representative depiction of society (although if you’re waiting on a Souvlaki emoji you may have to wait a while, there are many people still losing sleep over cheese being left out of the emoji menu).

At this stage it feels like the worst thing about being this close to universal communication is that it will be exploited for evil – in other words corporate greed. I love using the burger emoji to suggest we get dinner to a friend, but I don’t like it when McDonald’s uses it to sell burgers to hip young Twitter users. Marketers with a keen eye to “millennial activity” are jumping at the chance to spread their message in a faster and more fashionable way (If you want to order a pizza, you can now just send a slice emoji to Dominos). This is only a problem in so far as capitalism always tries to commandeer our nice things, and the solution is to do what we’ve always done: avoid, resist, and continue to use them in our own way. The pizza slice emoji doesn’t even look like Dominos pizza after all, the crust is much too homemade looking and the pepperoni haphazardly placed. Sorry brands, you don’t own emoji use. Not yet.