Labyrinth Romantic foreigner or cunning linguist? Throw yourself into the labyrinth and find out.

Are You My Body? I can’t find my body because it isn’t there. 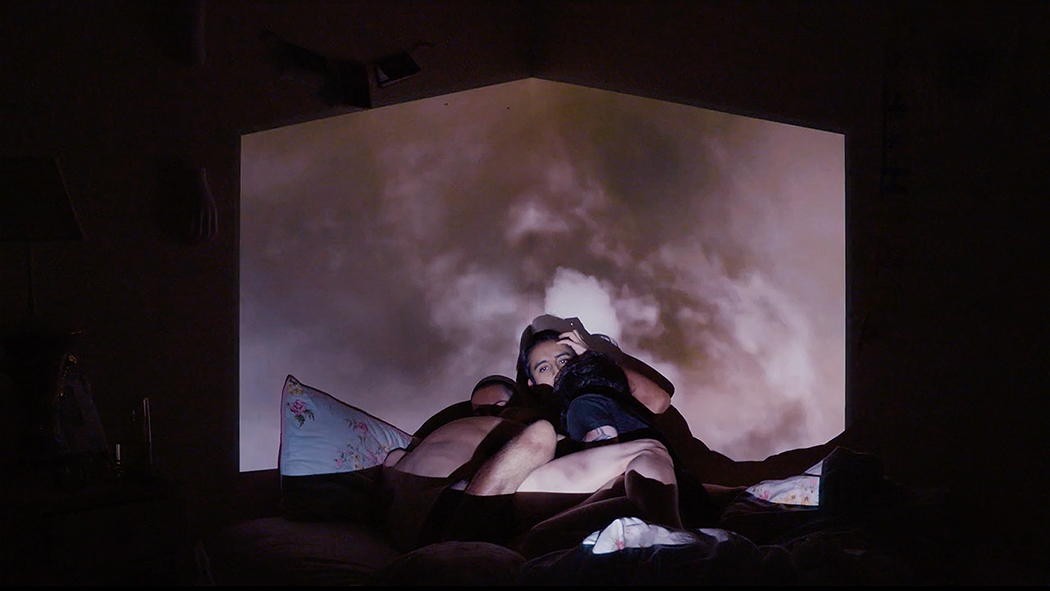 The new mothertongue.m3u EP opens in a cavalcade of sound, preparing listeners for an expedition of musical intensity and nuance.

Written with fierce intention by NYC’s Rachika S and Tokyo-bound Biki Zoom, mothertongue.m3u is electric poetry sending messages across borders. The duo examine loss, intimacy, and liminality with processed guitar tracks and layered verse. Together they generate visionary intensity out of immanent entanglements of queer rumination.

Really, the juxtaposing bodies and projected imagery shown in mothertongue.m3u’s new music video says it all, but we couldn’t help wanting more. We took a moment to converse with Rachika and Biki about their creative process, influences, and meaning making.

mothertongue.m3u from Neo Sora on Vimeo.

Congratulations on your EP, I can't help appreciate its sound and meaning. But please, tell us about mothertongue.m3u?

Biki: mothertongue.m3u is the name of the EP. We are Rachika S and Biki Zoom. I was born in Japan and have moved back and forth between there and the US all my life, so I consider myself bicultural. We met in college and grew to know each other online, bonding all summer while living in different states by texting paragraphs back and forth for months on end. We talked about trans-nationalities, media/technology, queer love, and ambient music. That winter I texted Ro about an idea for an experimental radio show, layering ambient music with writing rendered through computer dictation voices. So, the beginning was just us fucking around in the college radio studio.

Rachika: Eventually, it grew into a more serious endeavor. I wrote original music over which Biki collaged her own readings and writings. It means a lot to me that the basis of our friendship – digital communication and processing queer intimacy – reflects the basis of the project. For me, the project pulls together threads, labor, and ghosts from so many loves in my life. One lover’s hands caressing with mine projected over the bodies of two close friends, my girlfriend, and I cuddling, with lyrics about cycles of violence from relationships with ex-lovers.

Well, it comes through on each track. How long have the two of you made music music?

B: I’m classically trained in violin and a bit of piano and flute, and fool around with Ableton. I communicated many of my ideas to Ro but she was the one who produced the tracks.

R: I started playing guitar and drums in middle school and using Ableton in high school. I was all over the place stylistically. The kinds of music I made over the years would reflect my erratic listening patterns at any particular moment. Like, I’d get into a drum n’ bass obsession for a month, torrent gigabytes of Photek and LTJ Bukem, and fuck around with breakbeats on Ableton for hours. I went through phases with jazz fusion, prog metal, indie folk, dub techno, shoegaze…These particular songs are actually built from a couple math rock riffs I pulled apart with a granular synthesizer into a texturally varied range of similar melodic patterns.

As an Asian-American queer, I feel especially tuned to my multiplicity, having had to modify my persona, needs, and goals to fit the varying communities I show up in. I’ve often conceded so many parts of myself trying to squash all my queer deviance into any one group of people, which is why it’s important to my artistic narrative to resist feeling restrained by any scene’s aesthetic policies and artistic norms and honor the ways pieces of me show up differently navigating various stylistic terrains. 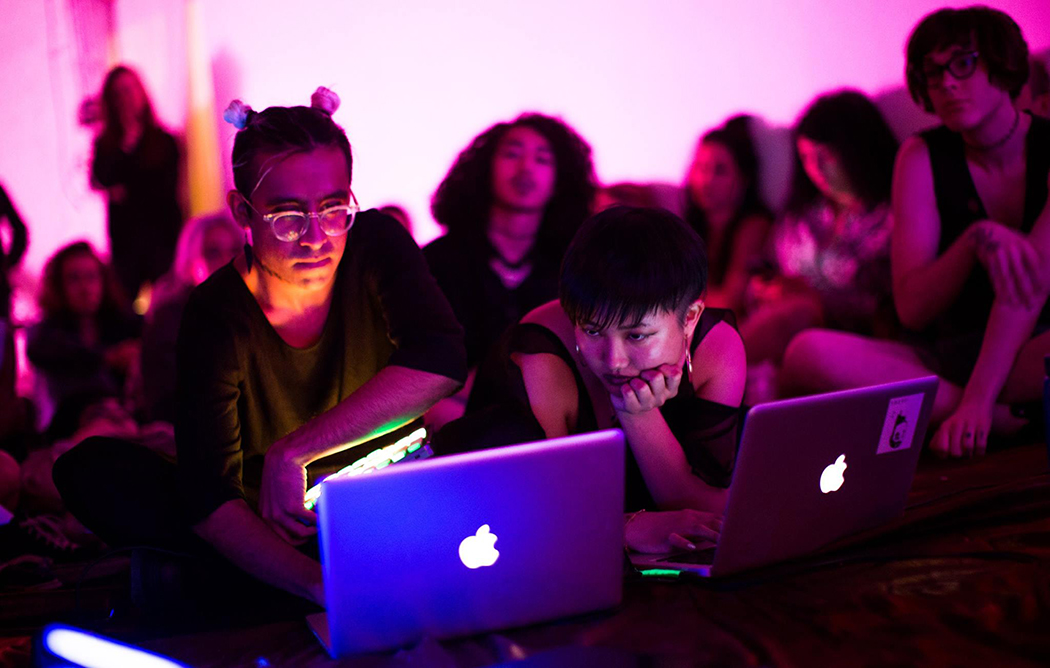 How did you develop the concept for your music?

B: Ambient music has always fascinated me as a genre exploring the pre-verbal, or non-verbal. It’s literally music that doesn’t ask much of you. You can ignore it and it’ll just hang out anyways. At the same time, some of the most powerful sonic experiences I’ve had has been through immersion in ambient music because the floaty form allows your (sub)conscious to travel into deep crevices of hidden feelings. I wanted to contrast that haunting, swimming-into-your-mind kind of texture with over-the-top robotic voices talking about the gritty human stuff that hurts, to explore emotionality meshing the atmospheric and virtual.

The “lyrics” for the tracks draw from writers like Theresa Hak Kyung Cha, Claudia Rankine, and Audre Lorde, who entwine theory with the fluid language of poetry and vignettes. I wrote it in the few months before I had to leave NYC and move back to Japan unwillingly because of my visa status. I wrote it while tracing back my memories of queer intimacy, trauma, and identity fractures to what it means to be displaced from the place you finally find as home, away from your community and your creative foundation.

R: Biki’s idea of combining expansive ambient-scapes, our journals, our readings, our poetry, and short film sounded really appealing to me. The intricacy of all the interconnected parts.

What are some important inspirations, musically and otherwise?

R: The sweeping, narrative hyper-drama of things like Johann Johannson’s “Fordlandia” opens up so much inside me. Or the way Elysia Crampton’s exploded sonic iconography travels through time, generating future possibility as it revisits eras and eras of colonial violence. I want to make music that is operatic in scale, but with the spare instrumentation of queer folkish artists like Told Slant or Grouper. Making music, it’s usually just me trapped alone in my bedroom with a guitar. Fennesz is a model for that in how he translates his lone guitar-playing into vast soundscapes with an orchestral-like range of timbres. Tim Hecker’s performance spaces inspire me. Biki and I went to one of his concerts that was so heavily bathed in fog you could hardly breathe. It felt ego-shattering.

B: All of the above, and I’d also add Jefre Cantu-Ledesma for the way he fills up the sounds with so much lightness it overwhelms you, and the dark creature textures of Arca that are relentlessly queer. We had been doing this project before I first heard Elysia Crampton, but American Drift clicked like no other for me, weaving such a fierce sonic narrative unapologetically rooted in colonial trauma. Listening to the assemblage of techno, club, and ambient tonalities always inspire me to keep digging deeper into electronic music. 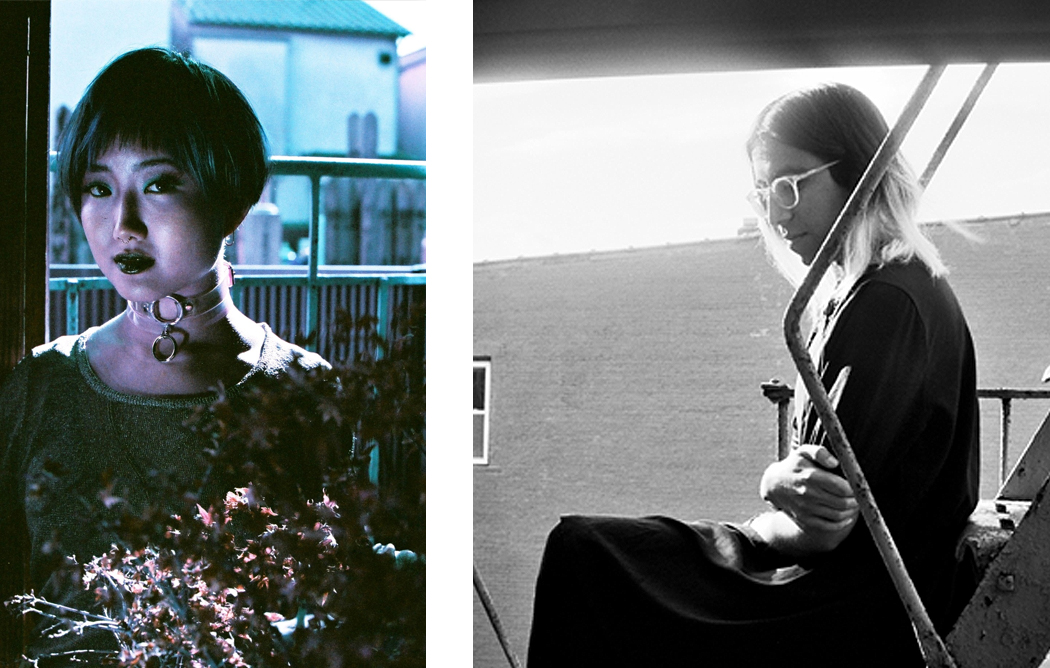 In your video, the application of sound and aesthetic draws in sharp imagery and lays it over a caring exchange between queer lovers. Could you tell me a bit about the why and how of these intersections and image use in your work?

R: For me, the video specifically recalls moments cuddling with queer-family three years ago after an unbearably traumatic year of arrests, assaults, attempts, abuse… Desperately holding one another amid total loss. It feels like more than an ossified archive of trauma, though. Projecting those images across the entangled bodies of new love in my life, it felt like those hopeless moments fleshed as new life.

Writing music at home feels like sculpting the architecture of my living environment. It’s about traveling, creating comfort, and accessing collectivity from within my bedroom because I’m often trapped alone inside from fear of what happens to trans femmes in public. I wanted the video to reflect how the aesthetics and intimacy between queer lovers make domestic space vast with otherworldly life rafts of togetherness traveling through time and space.

B: Moving back to Tokyo a year ago away from all of my friends and community really tested my ability in queer world making, of how I can keep envisioning and thrive in my sense of self without the fundamental QTPOC support I had in NYC. Submerging myself in music, textures, visuals, and moments that remind me of these desires has been my main coping mechanism. This video encapsulates those elements. From the exploration in moving through transcendental spaces, showering in glistening light, to the quiet moments of lying in bed with your lovers, it’s an audiovisual archival journal of my and Ro’s memories and vision of futurity, of processing our future through our past. It offers a queer bricolage of ruptures, collisions, and attachments, to heal and move forward. 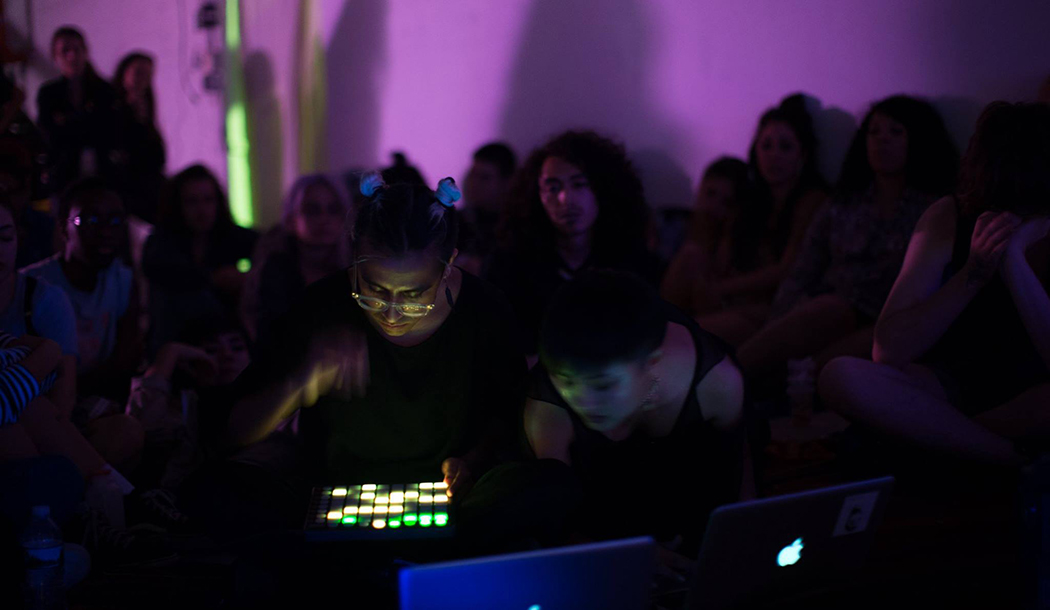 Mothertongue.m3u covers a variety of intensities such as borders, distance, lovelessness, queer affect, and sexual assault. Is this a conscious choice, presence or strategy?

B: We definitely wanted to create something overwhelming, something beyond the realm of habitual life. At the same time, the themes you listed up literally comprise our queer/gender non-conforming/displaced/POC reality. Every day our interiority gets fractured and mends itself again reflecting on our haunting past that may be so different from what we have now, or what we desire in the future. I wanted to make tangible this idea of how intensity runs at the core of queer being. But I also wanted to deepen those sensations on a textural level and distil them into a 20-minute emotional rollercoaster, to really accentuate the visceral feeling of queerness in all its multiplicities, at least for me.

R: I guess I just wanted to map all these different limit experiences and traumatic ruptures erupting in my exploded psyche. Each of those intensities points to threads that run between them all, but I can’t really reduce my intentions to any one of them.

R: I’m working on a bunch of new songs for a solo album, and there are a number of friends I’m planning on collaborating with to finish them. But before that, I really want to explore some more ambitious performance ideas with immersive audiovisual components. I want to experiment with fog and lighting. I might try to build some MIDI-controlled light rigs, or maybe try to recreate the video with performers on a bed live.

B: I’ll be performing mothertongue.m3u with the video and live poetry in Tokyo at the end of March. It’s nice that we’re able to perform the project in various forms in NYC and Tokyo. I want to keep creating audiovisual projects exploring queer affect, find/build a queer creative community in Tokyo, and also release my own ambient tracks this year. 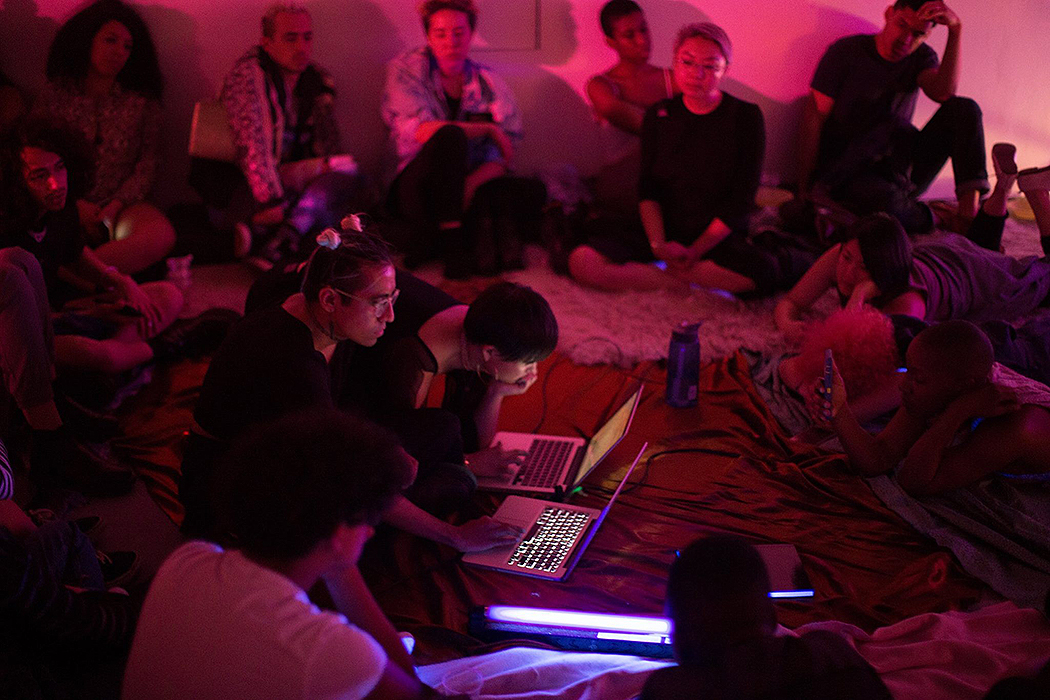 For more check out the mothertongue.m3u bandcamp.