Metropolarity The boisterous collective talks writing sci-fi for the present, building community, and their Philly state of mind. 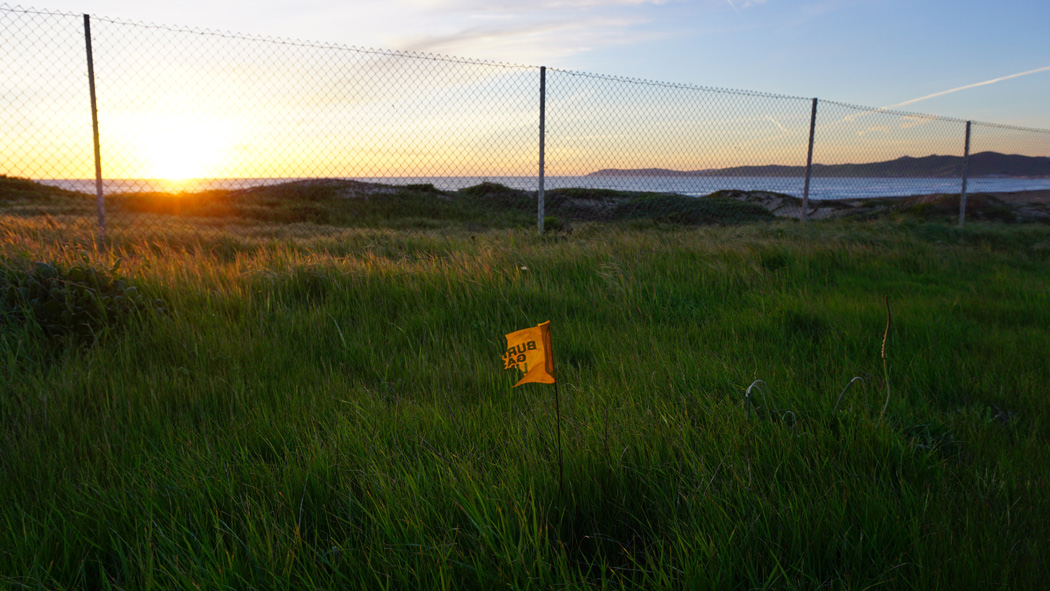 All photos by author

Turn off the Spigot

Many people know California for the bright and shiny things: gold, Hollywood dresses, computer chips. While driving along its state highways, Maya Weeks traces her memories of a different California: one of oil refineries, landfills, and family feuds.

Every time I drive between Oakland and my hometown in San Luis Obispo County, California, I pass a drilling site outside of San Ardo on US Route 101. Although many drilling sites are right alongside public roads, the infrastructure is designed to prevent people from stopping and looking at where oil is drawn out of reserves. But if you stop and look, you can see oil rigs pumping, numbered tanks for storing crude oil, roads carved in the ground for trucks to traverse the sites, and more. 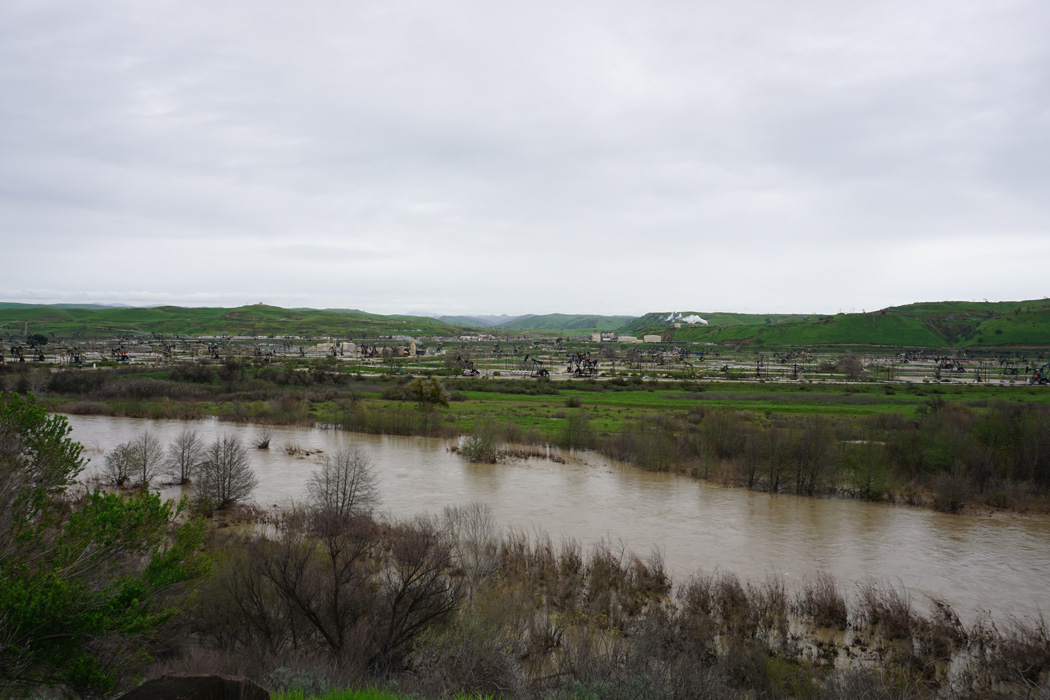 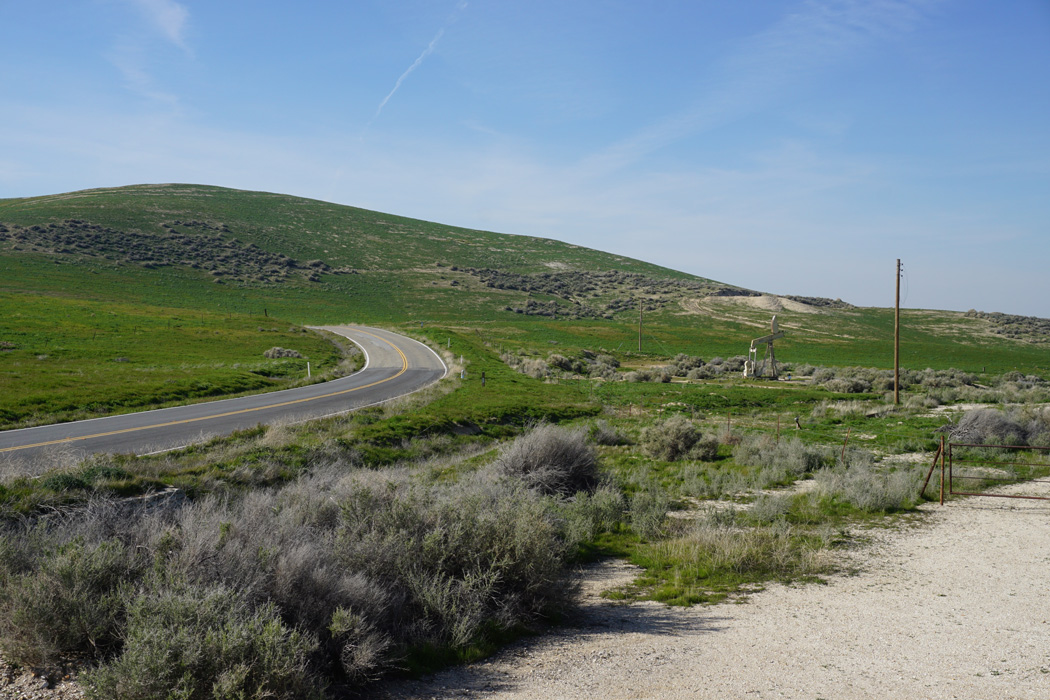 On one of my now-countless moves back, I stop to take some pictures. It’s overcast, raining slightly. This year California has flipped from drought to flooding. It’s greener than I’ve ever seen it, and there’s water in the Salinas river, which, during rainy years, drains to the Monterey Bay. Oil on trains moves to the ocean. Commodities travel to land. Even on land that looks strictly agricultural, it’s pretty easy to tell where the petroleum industry is situated. There are red flags and yellow pipes and tan paint marking the sites of extraction. Even though I don’t really know what I’m looking at, in Kings County, oil and water are reconstituted in the form of agriculture and fertilizer everywhere. There is oil and water in the almond trees starting to blossom in the late winter and in the scents in the air. 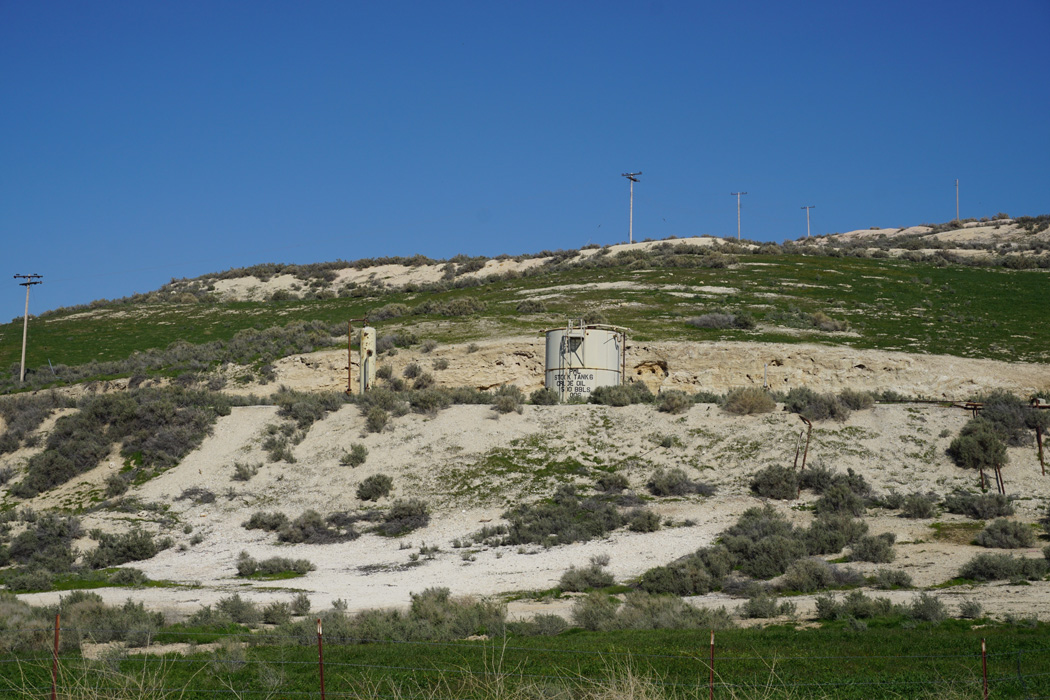 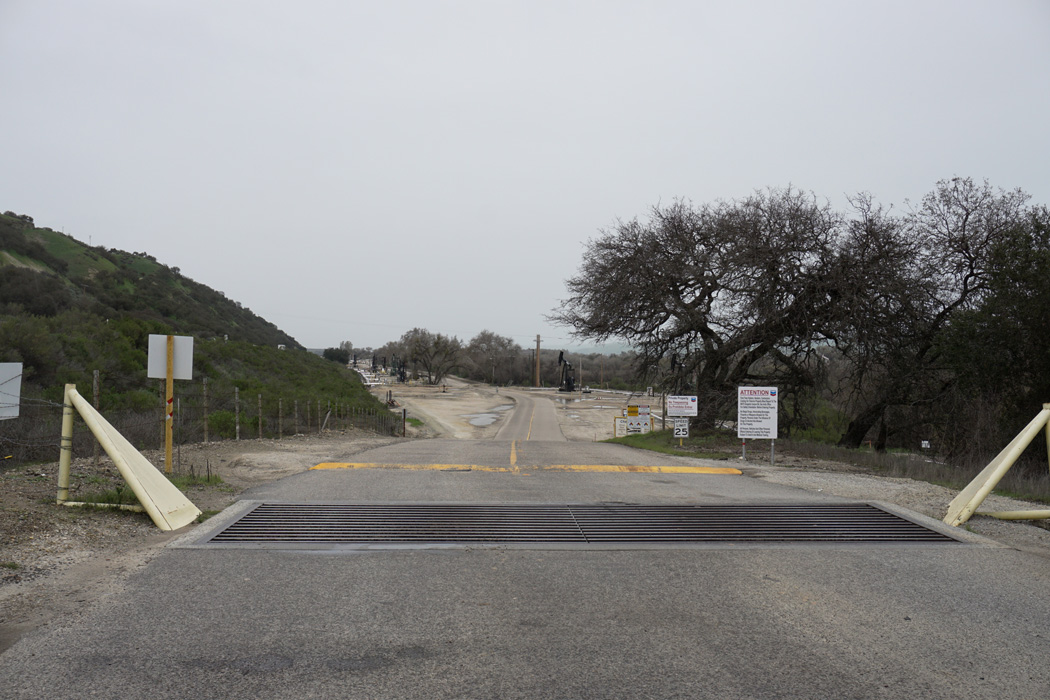 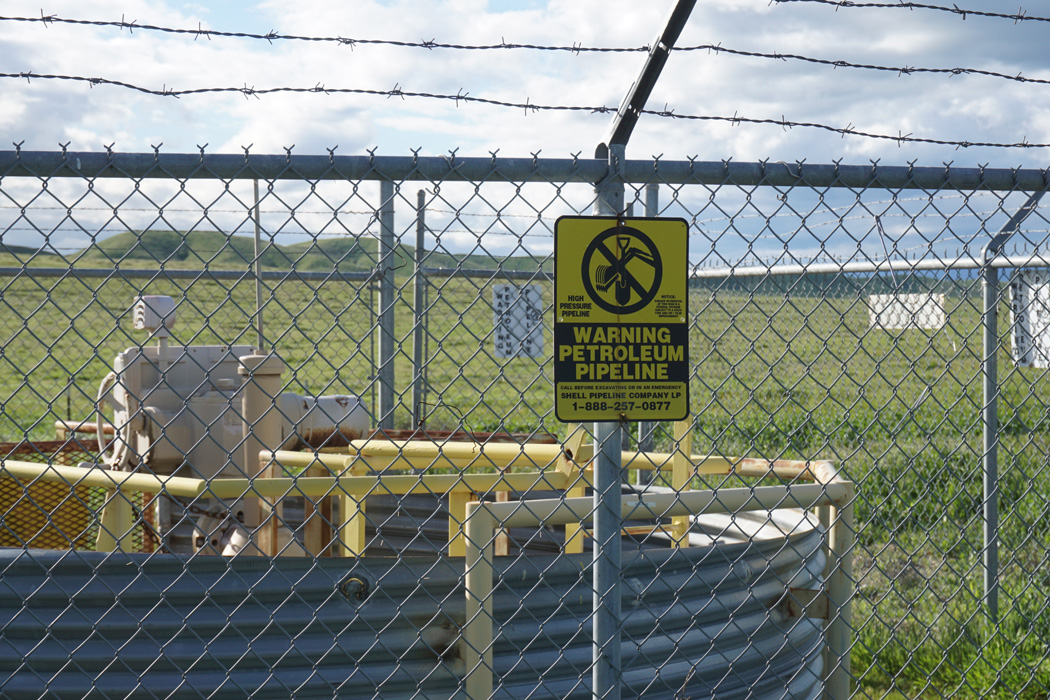 I get back in the car and start the engine. I remember driving past huge fields of oil rigs on my way through Bakersfield, where my dad grew up, to Iowa a few summers ago. On that trip, I’d taken California State Route 46 to California State Route 58. On both roads, oak- and scrub-filled hills are interspersed with oil infrastructure. I head east on 46 to follow my memory – past a father with debilitating mental illness; grandparents, aunts, uncles, and cousins with whom I have no relationship because of histories of abuse; and a Native great-great-grandmother displaced from the Great Plains. 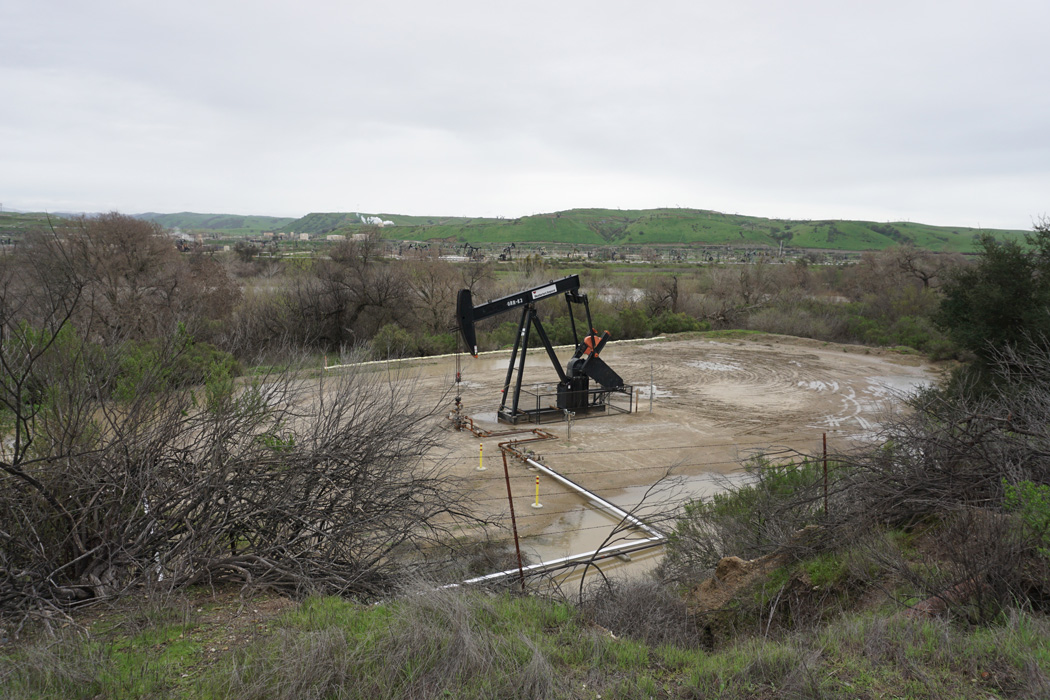 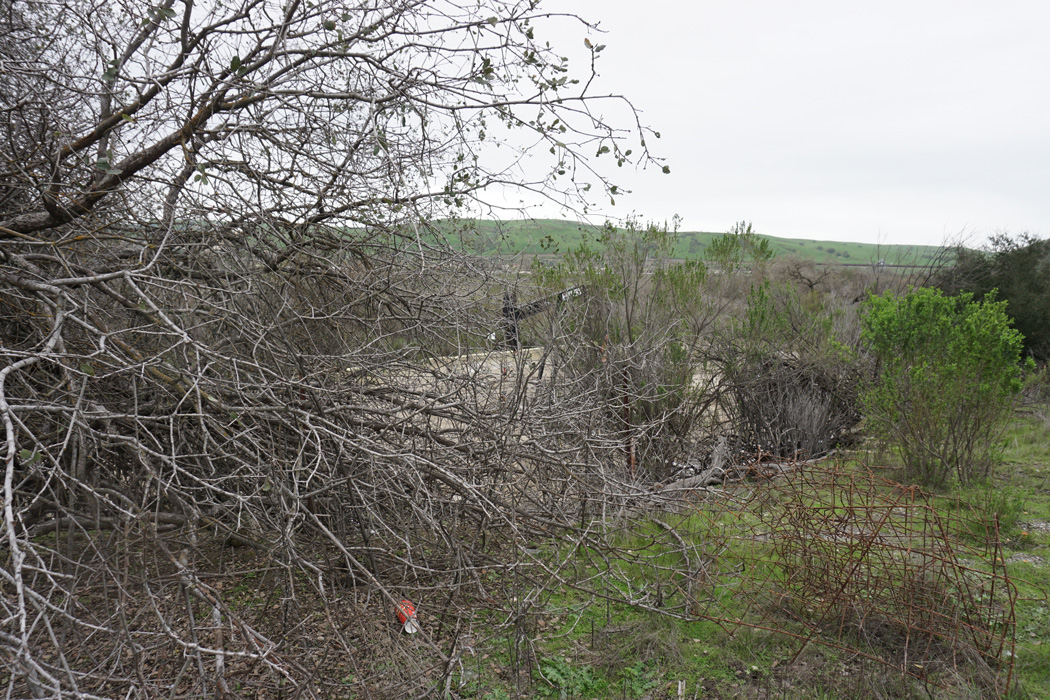 About half an hour from Paso Robles I drive past a fire on the side of the road. The fire freaks me out. It appears to be Caltrans workers burning off petroleum from a pipeline. I turn around and head east on State Route 41 instead, then turn south onto State Route 33 towards Taft, the entire Kern County portion of which is nicknamed the Petroleum Highway. I am doing things that don’t really make sense. Having grown up in drought in earthquake country, fire – which can devastate a home, a town, a region, in mere moments – scares me more than most things. This spigot looks like it could leap out of the workers’ control at any second.

I give up on trying to find Bakersfield, the oil capital of California, and head home. 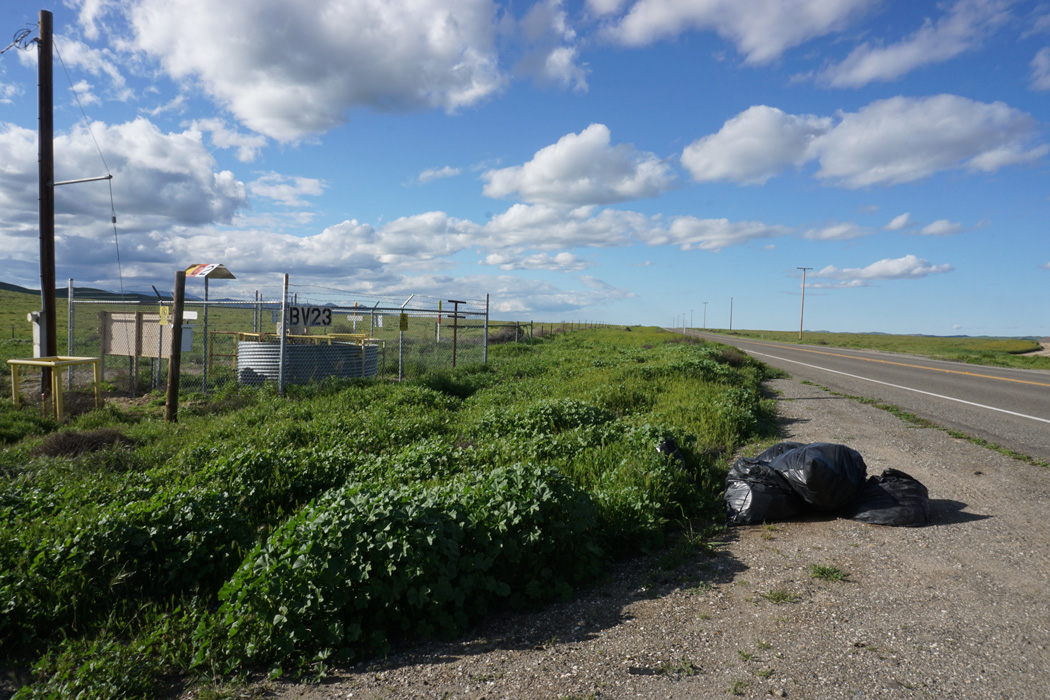 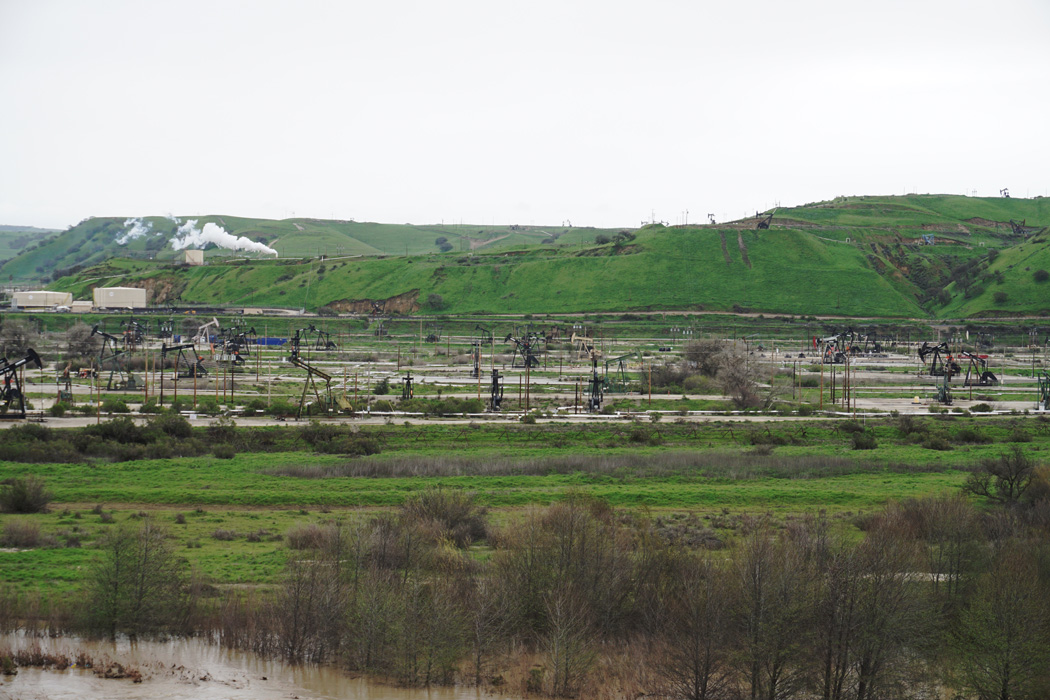 A few weeks go by. I work. I take pictures of cacti and trees. It keeps raining. I go surfing. I write stories and edit marketing material and send and respond to pitches and give a talk and prepare to lobby the California legislature on behalf of the oceans. I head for Bakersfield again, this time taking the 58 – maybe I misremembered the location of the field I thought was on the 46. I listen to the radio. Oil prices are sliding. I love the sharp turns and gnarled trees on the 58, and I take more pictures, often focusing my camera on places where the so-called “natural” landscape is interrupted by so-called “unnatural” infrastructure. My photographs are full of power lines and transformers and satellite receivers,  buildings housing transpacific cable termini and sites where these cables enter the Pacific Ocean. Sometimes I try to get away from this particular line of inquisition, but right now, I am looking for oil rigs on rich dirt. Many people come to California for the bright and shiny things: gold, Hollywood dresses, computer chips, but that’s not how most of us make our livings. 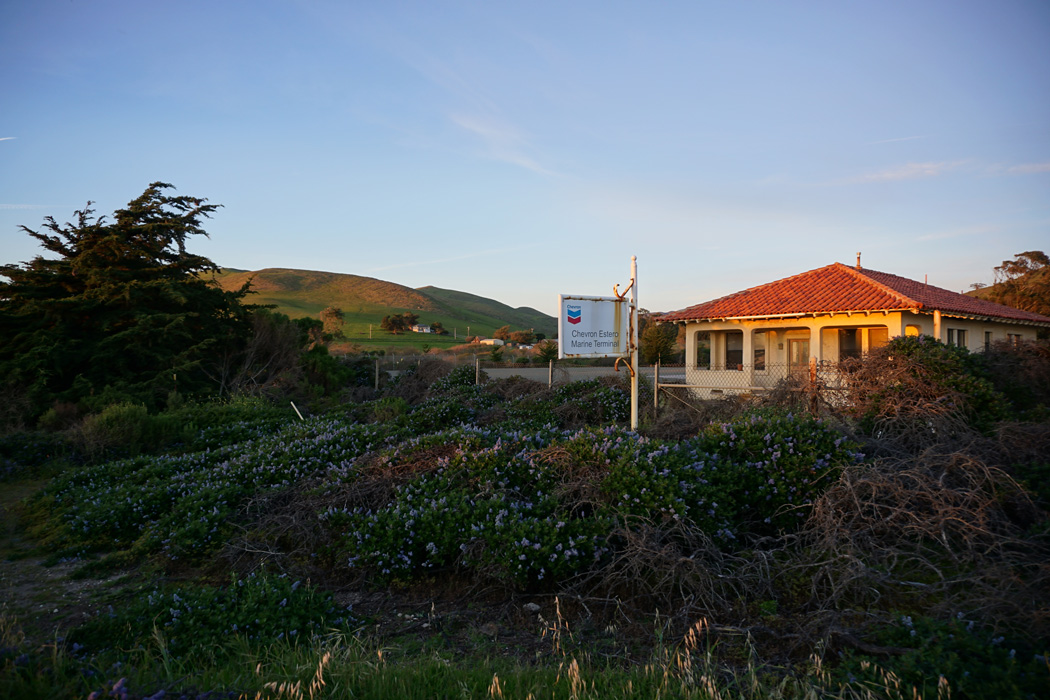 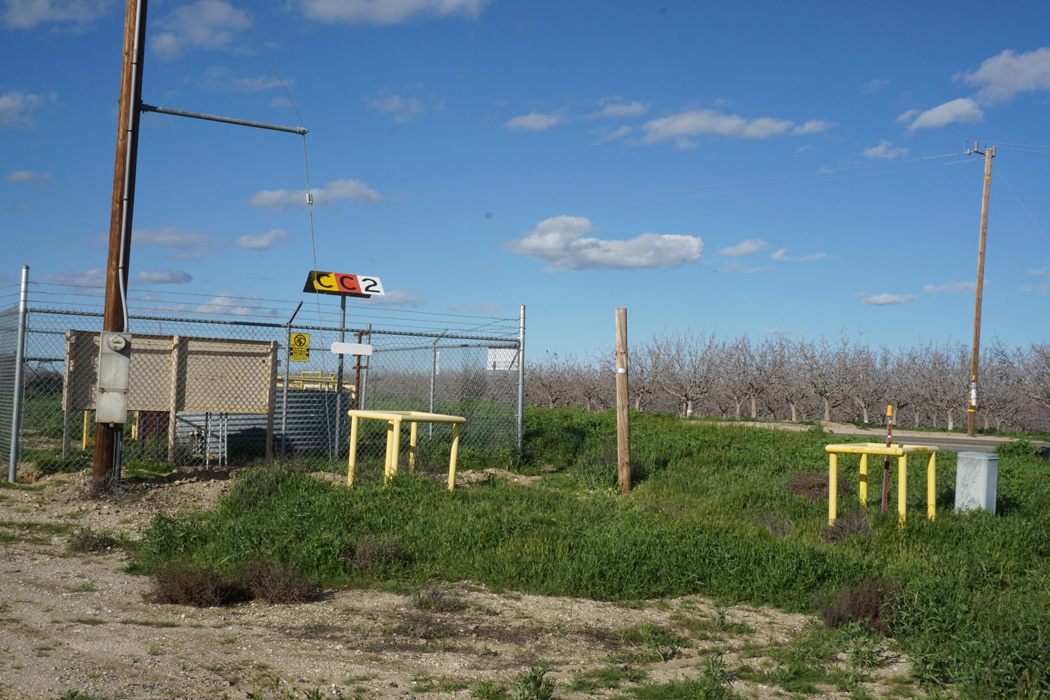 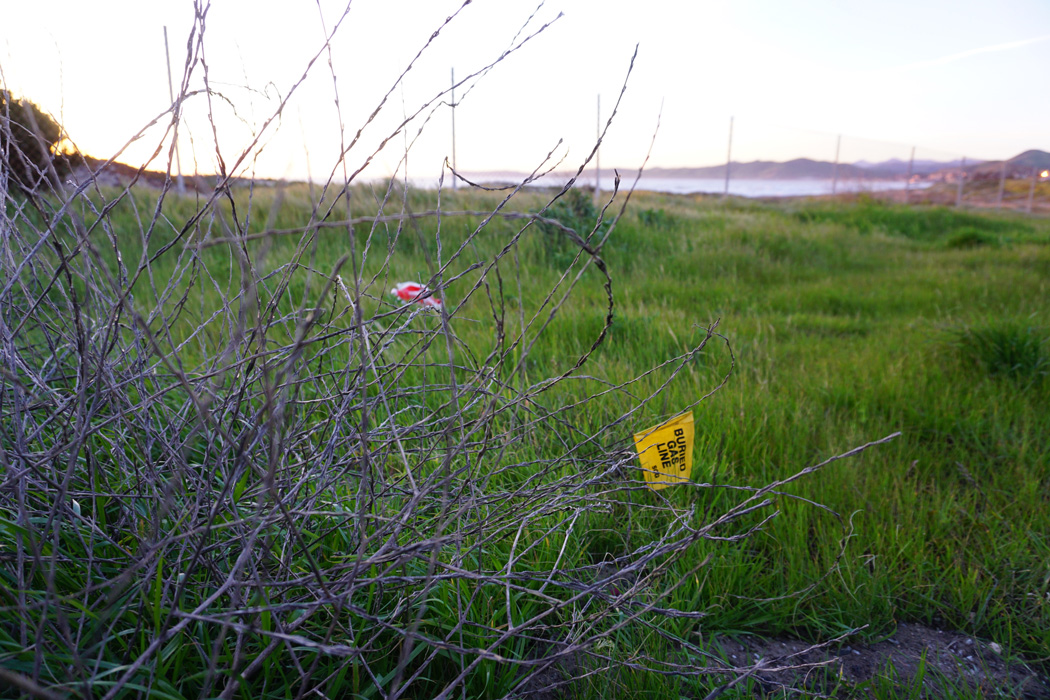 There is a junction on the edge of McKittrick where the oil fields and a landfill converge. For the moment I pass through it, I am with all my loves, or at least my two primary research interests, at the same time: trash and oil. My interest in trash came out of my unquenchable love for the increasingly-polluted ocean; oil is the primary source material for this pollution and also the fuel for transporting these goods. Trash and oil are, often, two sides of the same coin, which is why it’s so exciting for me to think about them together. The fossil fuel economy is based on disposability and planned obsolescence; without producing massive amounts of waste in the form of single-use plastics, this economy wouldn’t be viable. 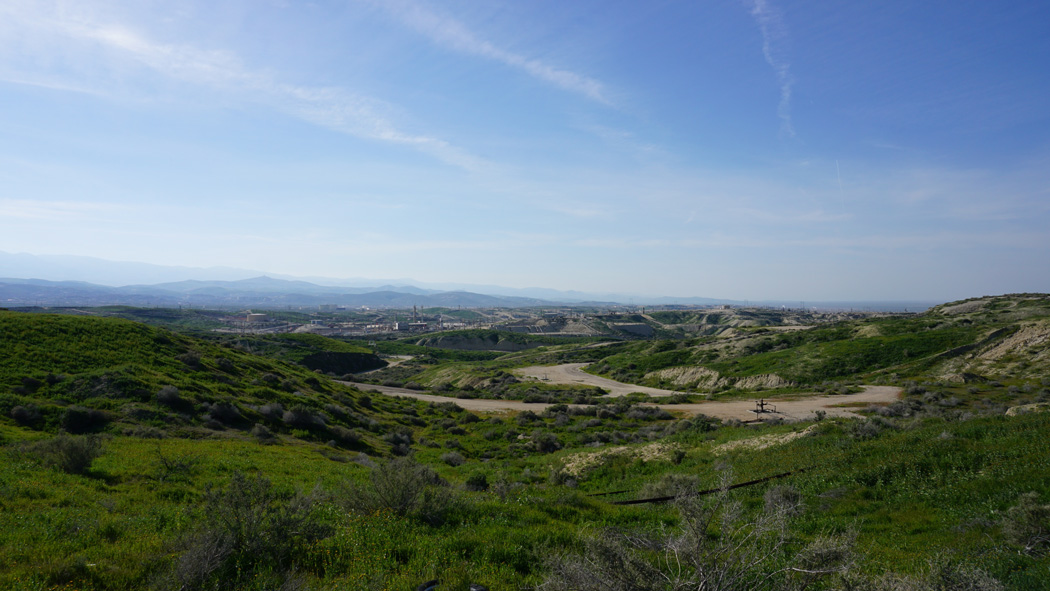 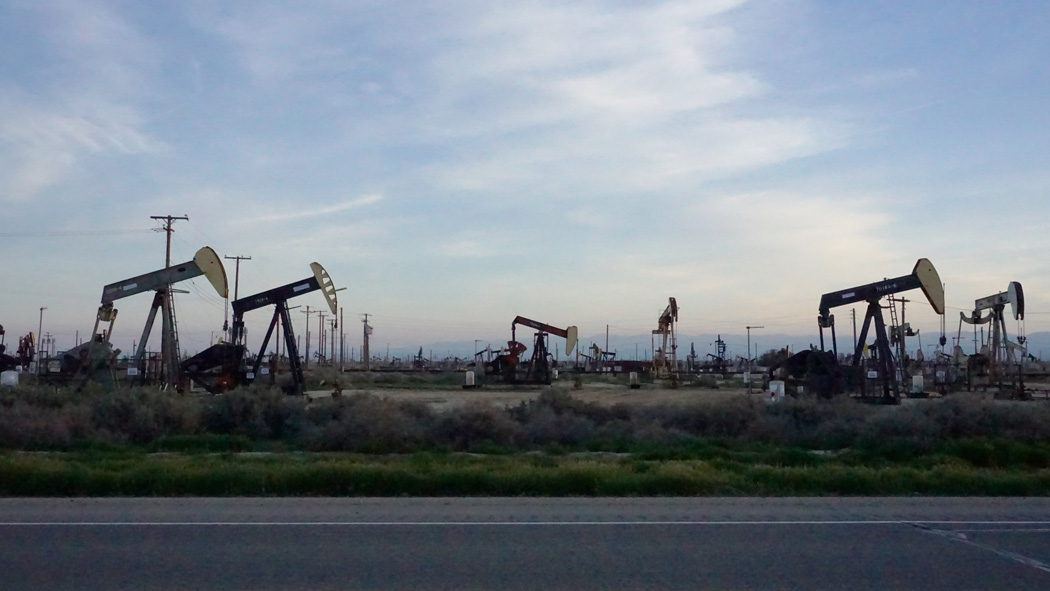 My great-great-grandma, who died in the Mojave, was Native and from the Great Plains, although no one knows which tribe. When I was younger I was told she was Choctaw, but last year my dad told me she might have been Creek. I was talking to a friend who is Native about this and she said it’s part of the abuse we inherit. My great-great-grandma’s grandson – my grandpa on my dad’s side – became a cop, beat his children, and then became a child therapist. You can see why playing the role of grandchild was difficult, and without elders to rely on (I’ve never met my mom’s mom, and my mom’s dad has been dead since I was ten or so), it’s been hard to figure out who I am. For years, I’ve been housesitting, subletting, and freelancing. One of the effects of the precarity I live with – in the forms of moving from place to place, fragmented work, and social mentalities of scarcity I’ve encountered in various communities derived from economy of oil – is a pressing need to find roots. For now,  I keep moving, staring out onto the horizon with a shipping container in one eye and a glob of trash in the other. 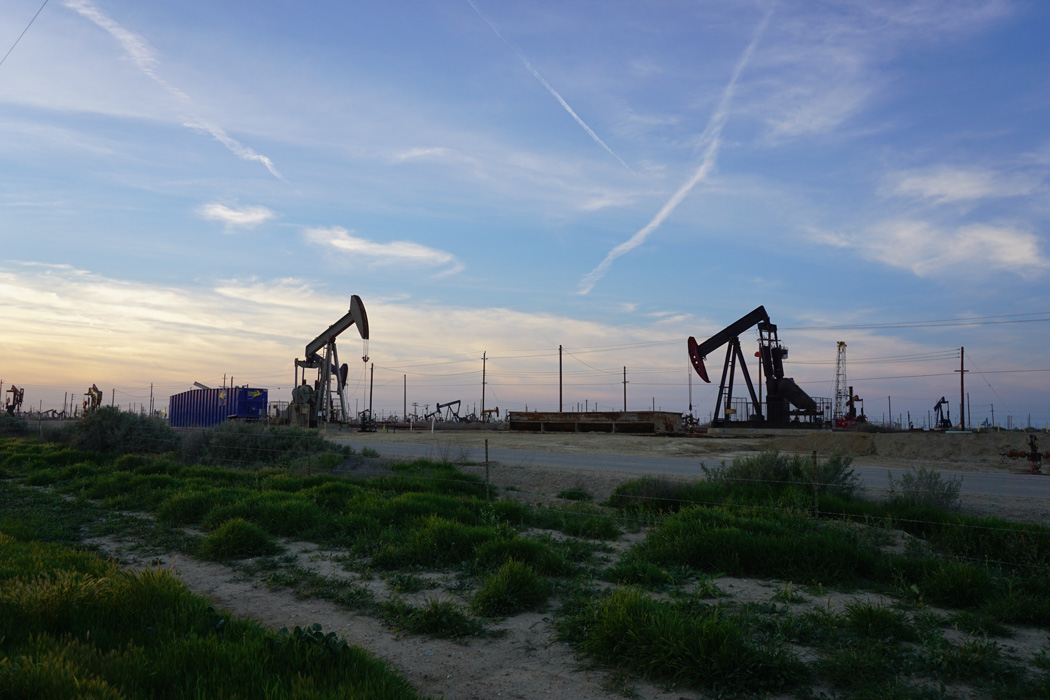 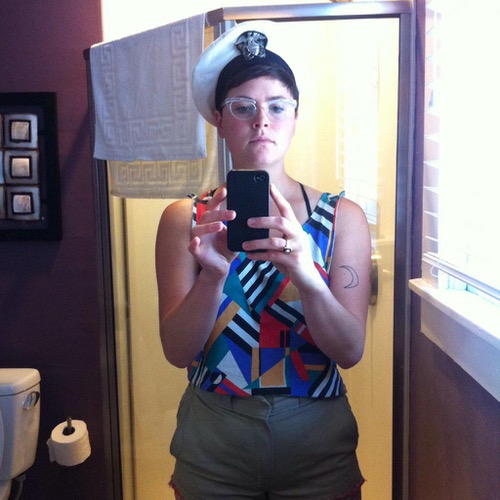