December Horoscopes – Gather round, it’s time for an old story, possibly the oldest story: the dying of the light and its fight to be reborn. 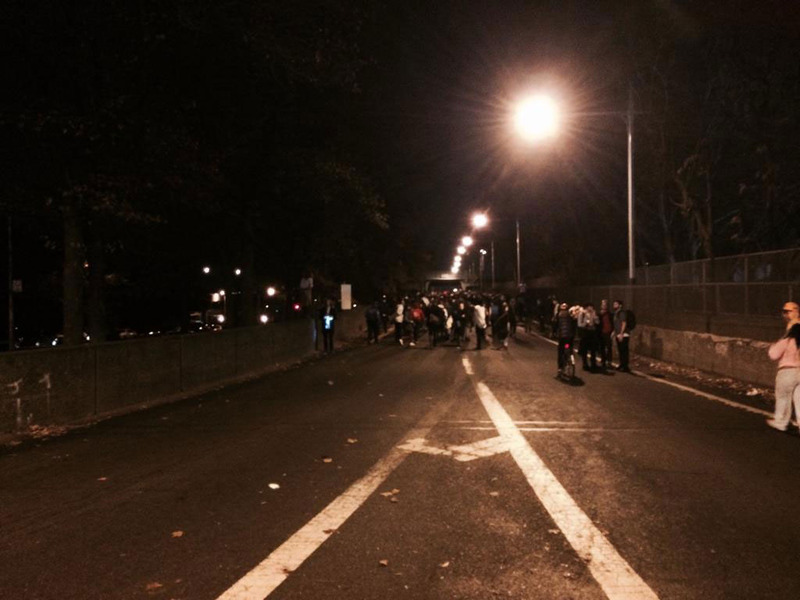 Passing through Worlds beside Worlds

A friend tells us she had planned to go visit family for Thanksgiving. That she was running late for her plane. At the airport, she learned that she had missed her flight, and so, on a whim, bought a ticket to Saint Louis, MO. When she arrived in Saint Louis, she jumped in a cab. “Ferguson Police Station, please!”

There she met hundreds of protesters. She spent the day volunteering time for legal support, and was invited by strangers to a family's Thanksgiving table. She accepted, and joined them for the meal she was meant to share with her family thousands of miles away.

One way to think about our lives in this world is by imagining what could happen. How what has happened changes what is happening now. How what will happen might change depending on what we do in the present, and what has happened in the past. Every moment pregnant with possible worlds, like in that movie Sliding Doors when the life of Gwyneth Paltrow's character splits in two as she both gets on and fails to get on to the subway.

It's hard to imagine life this way. Literally an infinite amount of possible worlds, in each of them some version of us either existing or not existing, suffering or not suffering. Instead, we feel confronted by the insurmountable apparatus that is militarized capitalism. Stuck inside of its one possibility. We're belittled by its monstrous machinery, and nevertheless remaining very much alive, crying and laughing, and strong somehow.

Sometimes, we experience these disparate worlds coming together. It's becoming more common, as social justice movements demand visibility and dignity for disenfranchised identities. And although they overlap with the dominant world at times – gender-neutral bathrooms, ethnic diversity stock photography, Gay Marriage – the distance between our positions in them can grow exponentially.

We get into arguments online with people who live in different worlds. We suffer the laws and the customs of people who live in different worlds. The racists, the cops, the misogynists, the transphobes – they're just as afraid of us as we are of them. As Darren Wilson, in his testimony on his murder of Mike Brown said, “The only way I can describe it ... it looks like a demon.” The feeling is mutual, Darren.

In the case of highly-racialized policing, when worlds collide someone dies. In others, we could be tramuatized, or assaulted, or pleasantly surprised. We're stratified, even in collisons. Our generation has had to learn to deal with being increasingly physically distant from friends and family, while opening the most private aspect of our lives to them virtually. Our careers or lack thereof. The way we love. The way we party or commiserate or self-medicate. No matter how mutually-exclusive two worlds seem, these days the odds are that they will bump into each other, however violently or gently, and somehow we will be changed by it. We have chosen to dedicate this issue to the idea of “multiple worlds”: how they split us, how they fuse us, how they structure us politically, socially, economically, and what happens when they collide.

In the past week, Ferguson has been on our minds a lot. On Monday, the night of the verdict, we spent several hours following livestreams from Ferguson, New York, Oakland, and Philadelphia before going to one of the marches in Manhattan. It was thrilling to see the march take the Triborough Bridge and hold it without being kettled, and follow Twitter updates from the other branches of the march as they swelled one by one onto other New York bridges. But what characterized our feelings from that night was the uneasiness with which we joined in the chant, “Black Lives Matter”.

The chant, the gesture, the hashtag #BlackLivesMatter has come to symbolize the entire political moment that Mike Brown's murder provoked. It's indeed a crazy time we live in: one in which – in America of all countries – people start rejecting the State's monopoly on violence, threaten the idea of private property by rioting and looting, and choose affinity and relationships of trust over police-enforced order. But beneath the surface of that idea – that truism black lives matter – is an unsettling challenge. What would it mean to create a world, or at least a space, where that actually was true?

Too often, the conversation is overrun by megaphones and op-eds before we get a chance to really approach the dire questions struggles raise. As people wonder how we might prevent the police murder of people of color from happening again, more bullets fly. More politicians, or would-be politicians, weigh-in to suggest legal reforms, technological solutions like body cameras, demographic adjustments ...

When a police officer killed 15-year-old student Alexandros Grigoropoulos in Exarcheia in December 2008, Greek anarchists responded with massive protests and riots that spread to many other cities in Greece and Europe and continued for weeks. Exarcheia is a neighborhood in downtown Athens, Greece that cannot be policed in a conventional sense. It's a neighborhood which police only enter in mass and dressed in riot gear because, once they enter, they will most certainly be attacked.

The police don't really go to Exarchia except in extreme situations because for them just to enter the neighborhood creates trouble.
— athensguide.com

Police do not patrol the neighborhood on foot, and rarely drive through. When they enter, they come prepared to fight and defend themselves.
— anti-propaganda.tumblr.com

A police-free zone is not a “new world”, it is merely the collision of many. Many worlds smaller than that of police order and governance individually, but that perhaps together are capable of defending themselves. Of surviving a collision.

This month, we look for all of the little worlds that might make up such a zone.