This is Halloween: the best club looks from hallow's eve 2015 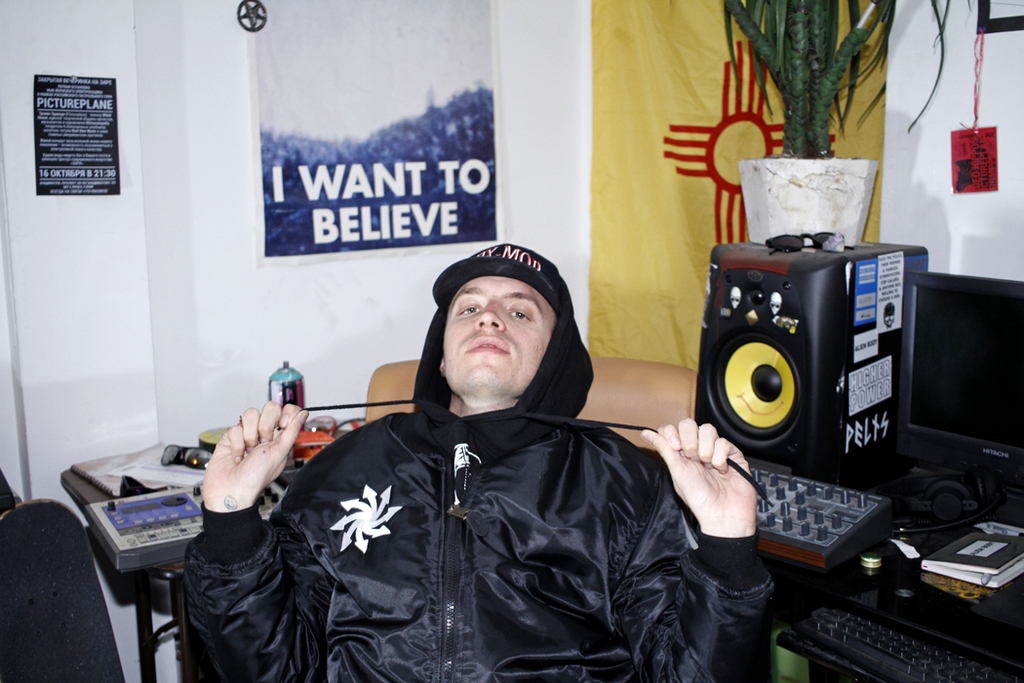 If Travis Egedy is Dr. Frankenstein then Pictureplane is the Monster.

Emerging in the late-2000s as mainly a joke in reference to films like The Blair Witch Project, witch house was started by Travis Egedy and a handful of other artists across Germany, the US, and Denmark. Known today for his onstage persona Pictureplane, and his line of occult sci-fi T-shirts with his brand Alien Body, Travis’ aesthetics are steeped in punk and hip-hop. His music straddles obscurity and familiarity, with references to synth-pop, goth industrial, and drone.

Coming from a background in anarchist politics and underground performance spaces in Denver, Colorado, Travis has a lot of prefigurative ideas about being a young artist in the new economy, and plenty of advice to share.

We sat down with Pictureplane as he showed us his work and living space, unveiling the man behind the hilarious and haunting music genre, and sharing with us the DIY community he’s drawing from. 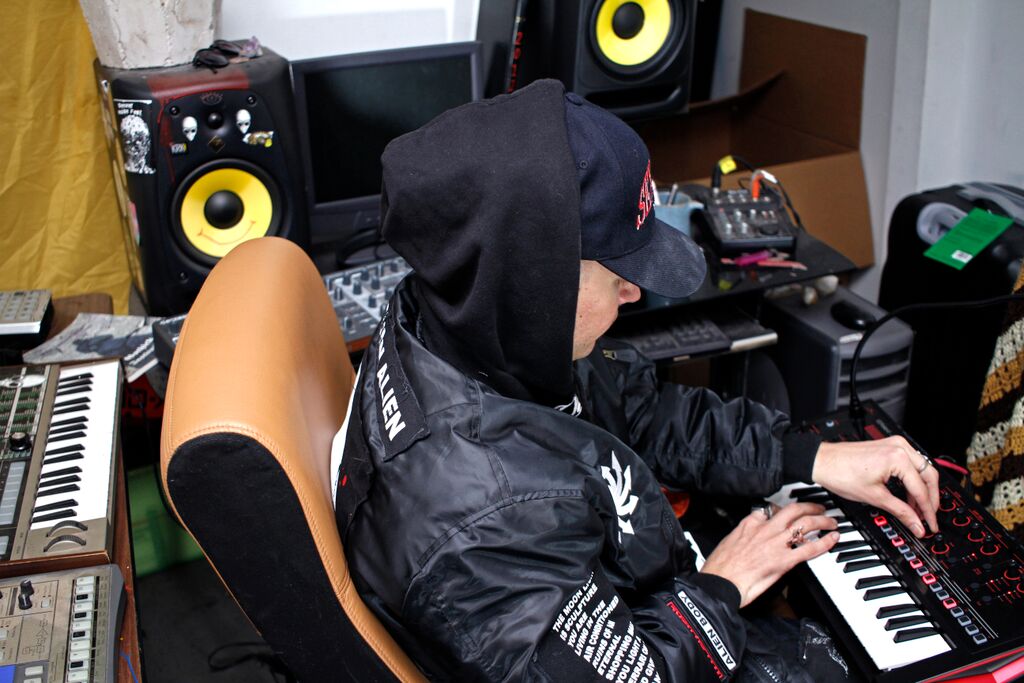 How do you prepare to play? I don’t have a specific prep routine. I stretch out a little bit and often go somewhere quiet where I can be alone for a few minutes before I go onstage. Mostly, I like to sip on some nice tequila before going out.

Who do you look up to as a performer? Wow, so many artists. I really look up to and admire anyone who just gives it their all onstage and lets the music overtake them. Or artists that are not afraid to challenge the audience. I think I really look up to my friend and comrade, DJ Dog Dick and his stage performance, Sewn Leather, extreme bands like Realicide or Wolf Eyes. I remember getting really inspired by watching old Suicide performance videos on YouTube. Alan Vega just staring at the audience so confident and intimidating. In the Suicide biography No Compromise they talk about going on tour opening for The Cars in like 1980 and having stadiums of 10,000 people booing them, and how the roar of the boos would fill them with power and they would thrive on it. I love that. 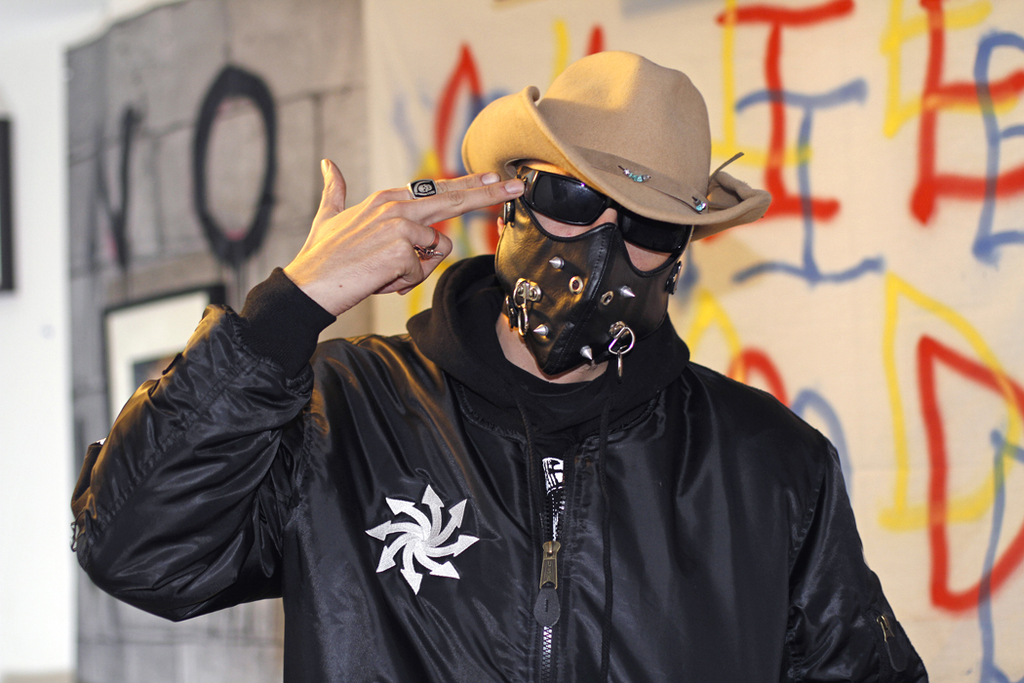 Previously, you've said you've never been a “punker,” but that you've always been punk as fuck. Can you elaborate on that? As a teenager in the early 2000s, I was going to tons of shows. Lots of emo and punk shows but more indie rap shows. I was really inspired by independent hip-hop and how DIY and politically charged it was. It was everything that punk was, just not “punk” music. When I was a teen, I was super anti-establishment and anti-mainstream, and was just super obsessive about “the underground," but it was more through a hip-hop view. I was in a hip-hop group from when I was 16 to 18 called Thinking in Circles. We played a bunch of shows around my hometown and dropped a CD-R album. Everything was all handmade and DIY. It was a lot of fun. I always got along with all the punk kids...

Do you have any advice for other artists and performers trying to support themselves through their work? Create your own economy! It’s one of the beautiful aspects of the internet and of internet culture, the ability to be seen and to have control over your own content and goods and services. I don’t work a normal job, so my relationship to the greater “economy” is not that normal either. I try and support independent and DIY artists and businesses whenever I can, however I can. I guess the best advice for artists trying to support themselves through their work is to just make really great work! There is so much shit out there now, you really have to stand out and offer something unique.

Do you see you see a distinction between yourself as Travis, and the public persona of Pictureplane? What's it been like cultivating that kind of performance and brand? The distinction is really thin. I am really open and personal on my public social media. And I think that is part of the brand of Pictureplane I guess, is that it’s really down to earth and personable. I enjoy being accessible to my fans. But it has also caused weirdness in my personal life and relationships, I think – the thin line between just normal "Travis” and this performance art entity of “Pictureplane” that is some sort of strange extension of myself.

You exist in and between the DIY scene and a burgeoning recuperation into the mainstream, what's it like for you to navigate this space? I really don’t think I am anywhere near a “mainstream” audience at all. But also, the line between what is mainstream and what is underground is extremely blurred these days. If anything, I would like to take really radical ideas and concepts and expose them to wider audiences. I enjoy coming out of DIY warehouses and grimy living situations and bringing that energy out into a public that is sort of unfamiliar with that lifestyle. I think that is a huge part of what I am doing with my art.

Where do you want to be in a couple years? Happy and healthy.

Keep up with Pictureplane on Soundcloud.