How Do We Keep Each Other Safe? Interview with Degenderettes

Fake ID Dismissing certain positions as “identity politics” is not going to get us anywhere.

Astrology Class I use astrology to know myself better, the same way I take Buzzfeed quizzes. 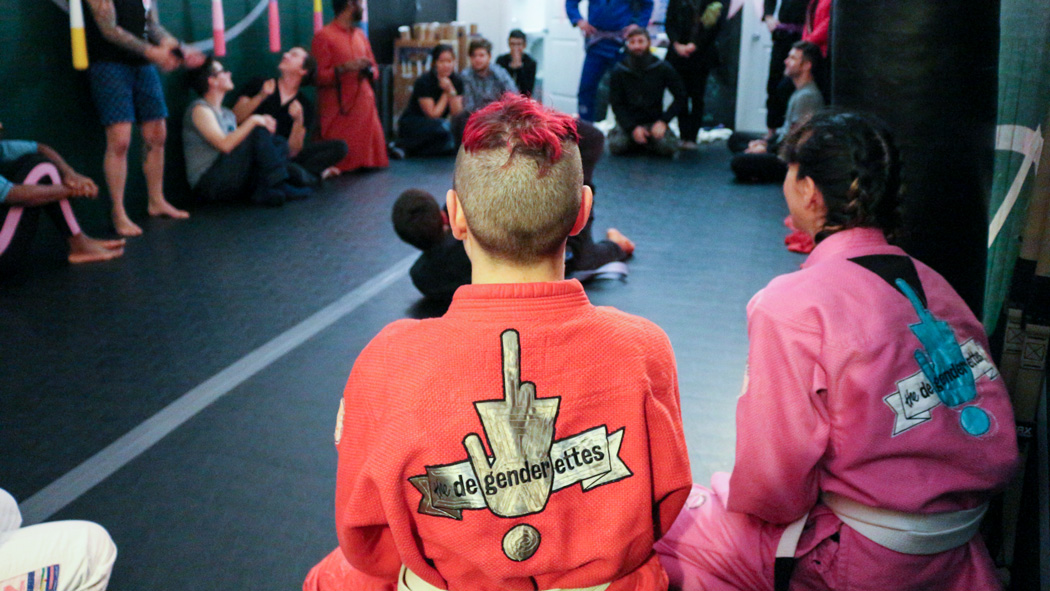 The Degenderettes make rad embroidered patches and queer weapons, offering a supportive channel for aggressive visibility in a society where visible queerness is often seen as a threat. I chatted with Scout, one of the founding members in San Francisco, to learn more.

Tell us a bit about The Degenderettes: who are you and what do you do?

We’re a messy network of folks involved in gender stuff. Officially we’re an art collective, but that’s too broad. It’s easier to describe us by what we’re not: there are lots of beautiful feminist and LGBT 501(c)(3)s out there doing great work in gender activism, but there are certain activities they can’t touch because they don’t want to upset their funders, or jeopardize their legal status. That is why people initially came together to form The Degenderettes. We’re committed to doing the things no one else will do – like loitering and smoking cigarettes against our clinician’s orders, because ain’t no one else gonna do that for us.

Each chapter defines their own trajectory. Toronto describes themselves as “a trans and queer bicycle gang with no bike requirements. We break things and rebuild them better. We create a safer community by supporting ourselves and others. We take up space through protest and disruption in a world that tries to tell us who to be. We make space using art and mischief. Remembering how to be ourselves, we refuse to fit into the spaces we’ve been given – so we’re building our own.” Los Angeles says they’re “a bitchin’ squad of badass, socially disobedient, civics-reforming, art-loving, poetry-penning, cake-baking, rowdy thug hacktivists.” My own crew in San Francisco is just some asshole queer layabouts with a really good selfie game. 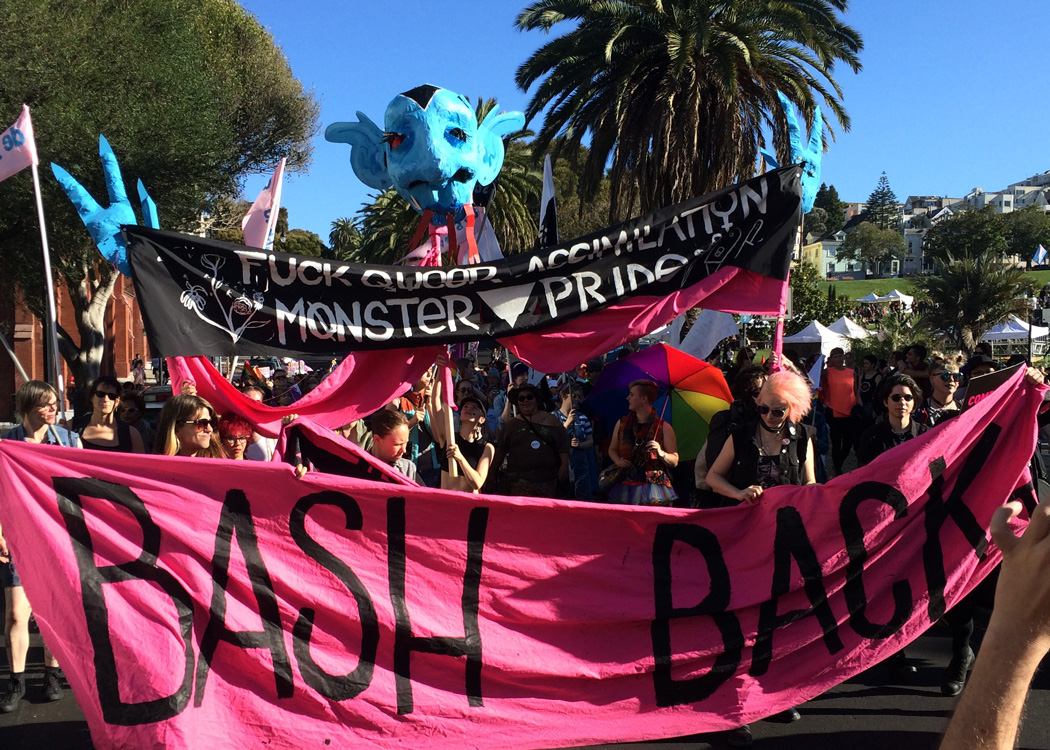 How long have y’all been around and how did you get started?

A few of us genderqueers were nervous about the backlash of Laverne Cox’s gift of visibility to trans people, and started talking about mutual protection. Late 2014 is when the name “Degenderettes” first went around. The first official members were a handful of feminists who liked to shoot guns together, along with myself and some other highly visible genderqueers who needed to surround ourselves with friends who gave no fucks. The aesthetic got passed around pretty quickly, and we were on a national scope by 2015.

Those baseball bats are pretty rad! Why did you start making them?

It had been a rough year of mounting transphobic harassments for us all. I had already invested in a baseball bat so I could, y’know, feel more like Beyoncé. Then the Pulse shooting happened, and I impulsively bought a dozen more blem bats off eBay to hand out at an upcoming trans march. I was imagining, like, a choreographed color guard routine with bats instead of wooden rifles, to declare we were still alive and not afraid of being visible. We didn’t end up bringing them to that march because we figured the cops would be extra jumpy and try to start a real Compton’s Cafeteria Anniversary Riot, which I worried would endanger the kids and elders marching with us. (One cop did pick a fight with us over a simple “bash back” banner, so it’s probably good we didn’t bring the bats.) A month later some local Degenderettes saw the forgotten bats in my workshop and took them for home defense. A few other members chipped in to buy our broke members bats too, and soon I had a dedicated bat-painting station in my workshop and was selling them over the internet. 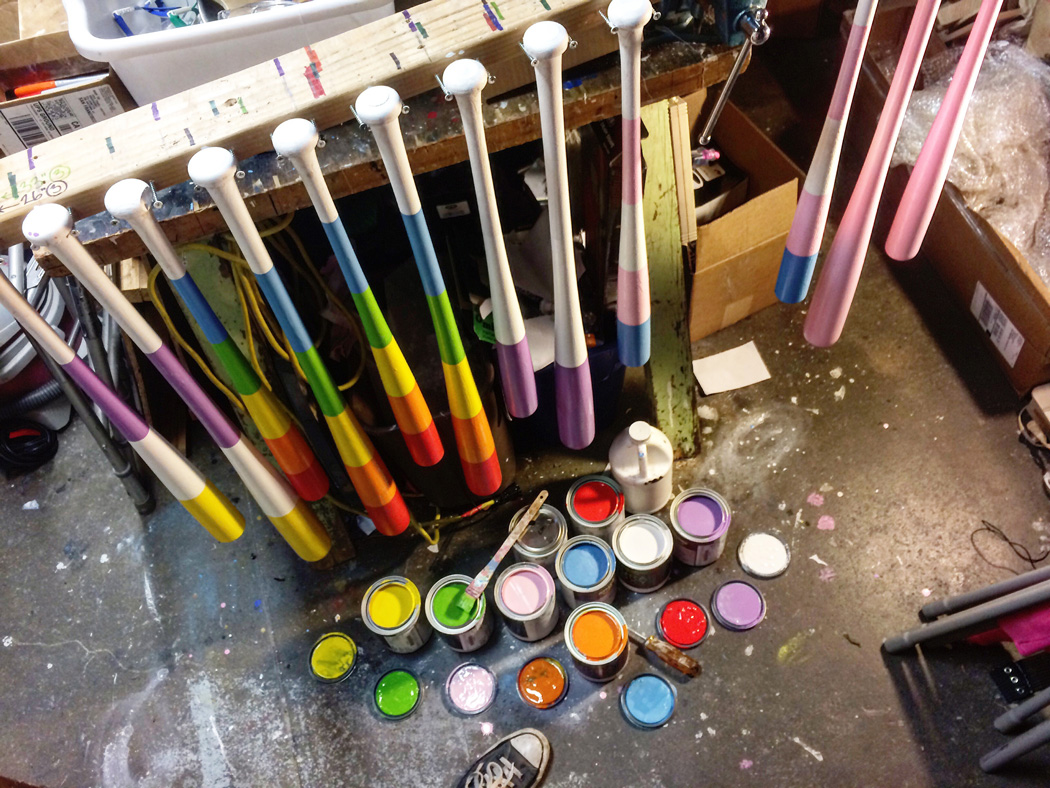 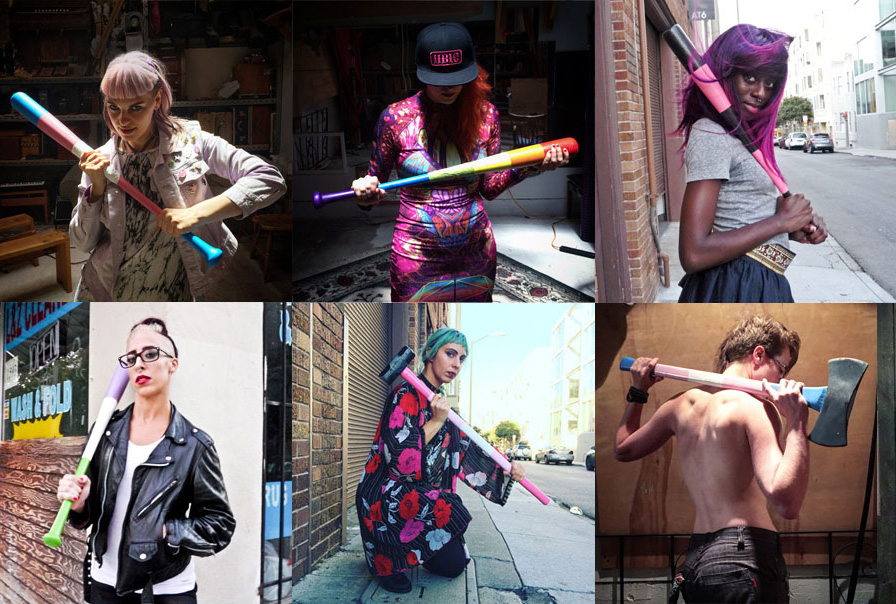 What are some of the most memorable actions or events The Degenderettes have organized?

We mostly just throw queer clothing swaps and dance parties where the punch is spiked with hormones. There was that time we were offered a gallery show in San Francisco, so we brought a urinal and smashed it with a pink sledgehammer, which was fun. Different members made other cool things for that show, like axe-scented tampons, tampon guns, weapons made from bike parts, a birth-certificate shredder, home-made hormone tinctures, a club jacket soaked in menstrual blood, and so on. Collecting all that blood from different members was particularly exciting – I don’t have a uterus, so I gave a pint from my vein (don’t ask me how we did that).

There was a comics anthology that Degenderettes from as far away as the UK contributed to that we peddled at small-press conventions. In response to HB2 we raised some money to print and distribute a few thousand tamper-resistant “all gender toilet” stickers that fit perfectly over existing restroom signs. 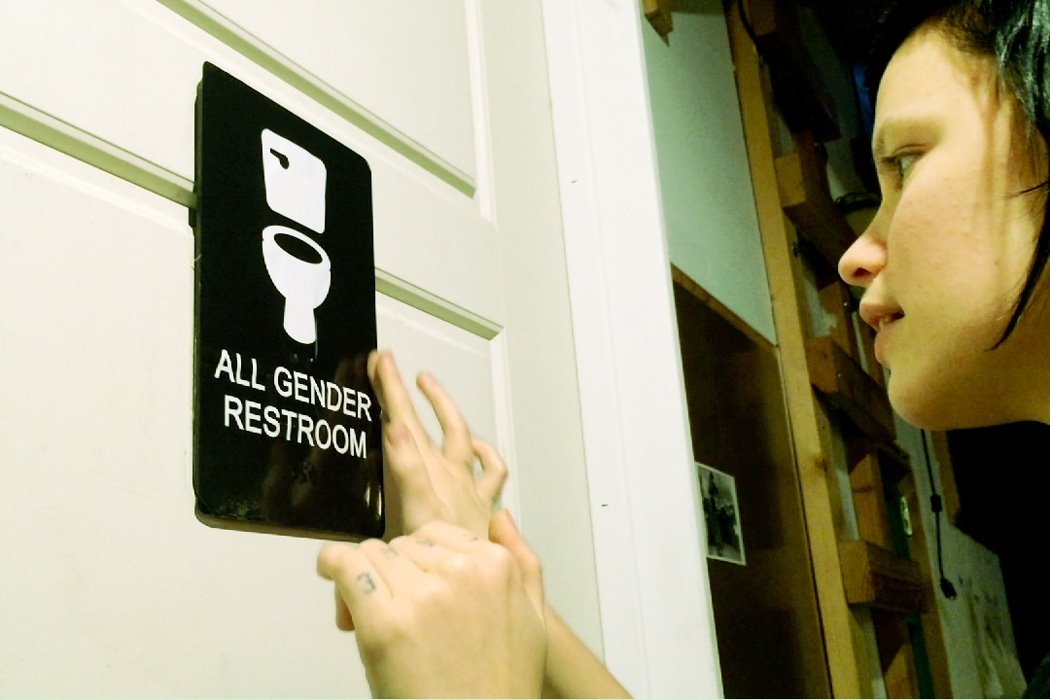 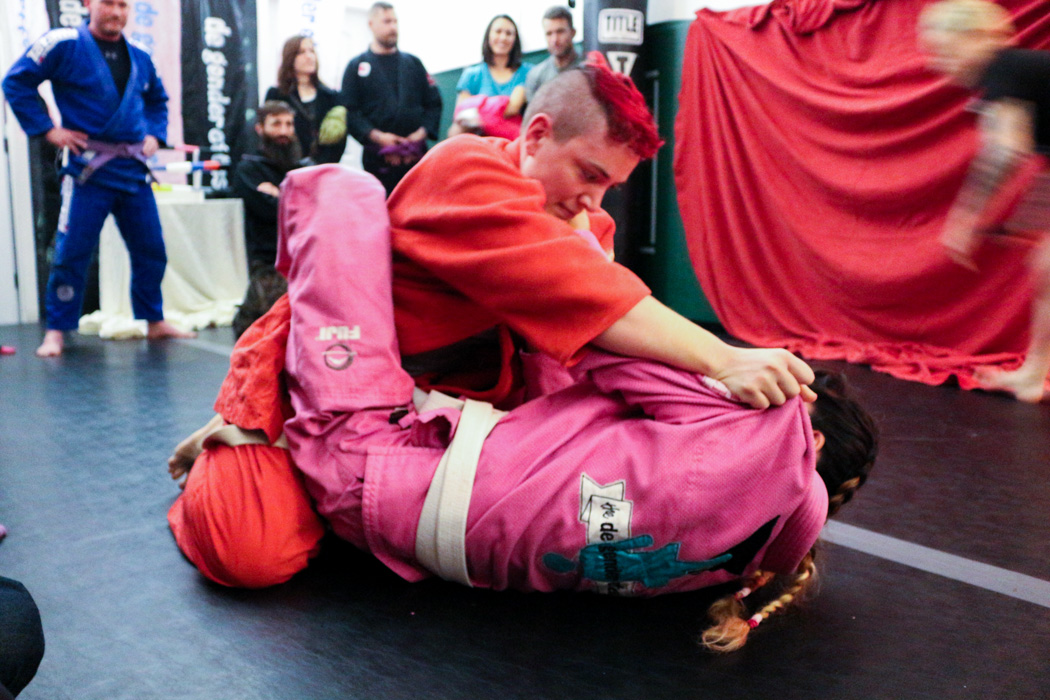 Photos by Scout Tran (above) and Melissa Wyman (below)

Oakland chapter had a queer burlesque fundraiser where we raffled off bats and a barbed-wire scourge, and then gave that money to a gender-affirming martial arts instructor who taught us the secret bro art of Brazilian jiu-jitsu (one of the smarter things we’ve done, considering we seem to have a proclivity for chasing nazi scum around San Francisco). There are some stickers going around this season for harassing organizations like The Salvation Army, which claim to do good but actually hate on queers.

Honestly, our most effective project is just wearing our back-panels around town to make other femmes and queers feel safer, and posting lots of pictures on Instagram to help isolated queers across the country feel like there’s at least somebody out there visibly fighting for them. 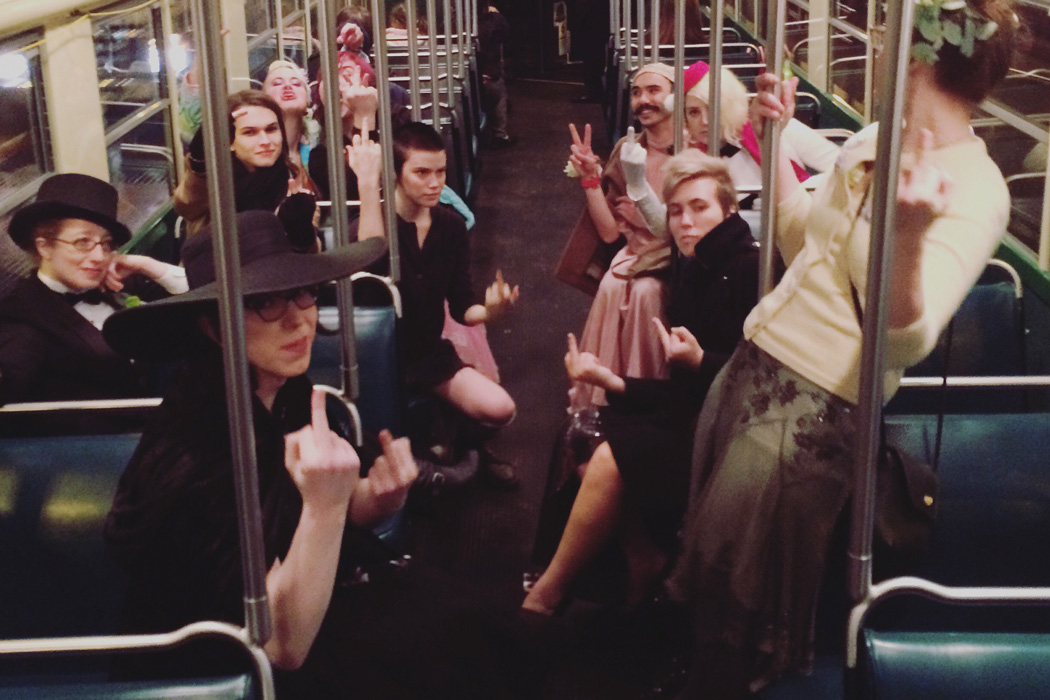 How many chapters of The Degenderettes are there, and where are they?

I’m really bad at counting, but since readers may want to contact a chapter, I’ll do my best. The major chapters are San Francisco, Oakland, Los Angeles, and Toronto, with smaller, tight-knit groups in San Jose, Santa Cruz, Baltimore, New Orleans, Fairbanks, and Western Massachusetts. There’s a bunch of fully-patched members in New York, Portland, Seattle and Chicago, but they haven’t chosen to organize into cohesive chapters. There are some lone members in places like Asheville, Berlin, Columbus, Brighton, and Brisbane that are as functional by themselves as any other major chapter. There’s also all of the isolated, rural or roving members. I’ve heard rumors of chapters starting in DC, Boston and Ottawa since the election, and probably other people starting new chapters in other cities that I haven’t heard about.

How does one join The Degenderettes?

We joke about blood-in blood-out, but it’s really just about having each other’s backs. Initiations have arguably ranged from bake-offs, to much more aggressive things that I’m nervous to talk about. If you really want to throw in with us, and you don’t already know a member, try contacting someone through the merit badge order form or even our public Facebook page to see where the closest chapter is. If somehow there’s no one anywhere near you, you should get a couple people together who want to stand up for each other through thick and thin, and then let whoever’s running the embroidery machine (currently me) know you’re forming your own chapter and you want back-panels (via whatever contact info is currently listed on degenderettes.com).

The Toronto chapter says each of their members define what they need to do to earn a badge, and then tell each other about it. LA chapter is like, “Are you shutting down the transphobic shithead who’s somehow always at the 7-Eleven at the same time you are who doesn’t shut up about how you’re being gendered in a way that makes him uncomfortable? Did you roll up to Thanksgiving with a pie that everyone fawned over so your shitty uncle just sulked quietly for once?” Some of the badges aren’t so confrontation-based – sometimes at a comics convention a kid will come up to me and ask if they can buy one of the purple heart badges (sexual assault, queer bashing, etc.) and I just quietly hand it to them free of charge and don’t ask for any stories. 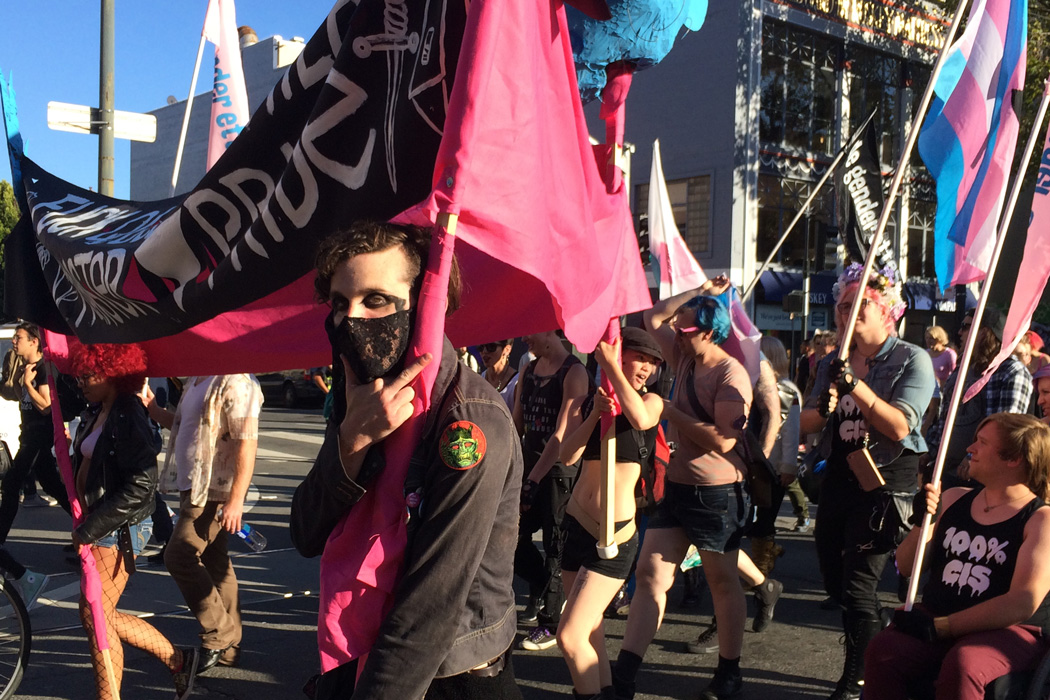 What plans do The Degenderettes have for 2017?

To be honest we just want to make it to 2018. Our Portland chapter is currently developing a safety app for us that will allow femmes and queers to hold space instead of just finding an escort home; hopefully we’ll have it out early 2017. I expect another comics anthology zine next year, and possibly also a professionally-published series for/about trans runaways trying to get into the foster system. Other than that, we’re just buckling down for some really shit times, focusing on taking care of each other and by extension our greater queer and POC community, and carving out space for future queers through our own aggressive visibility. I guess there are some other projects going that I can’t talk about here, which I assure you are purely artistic and totally harmless. 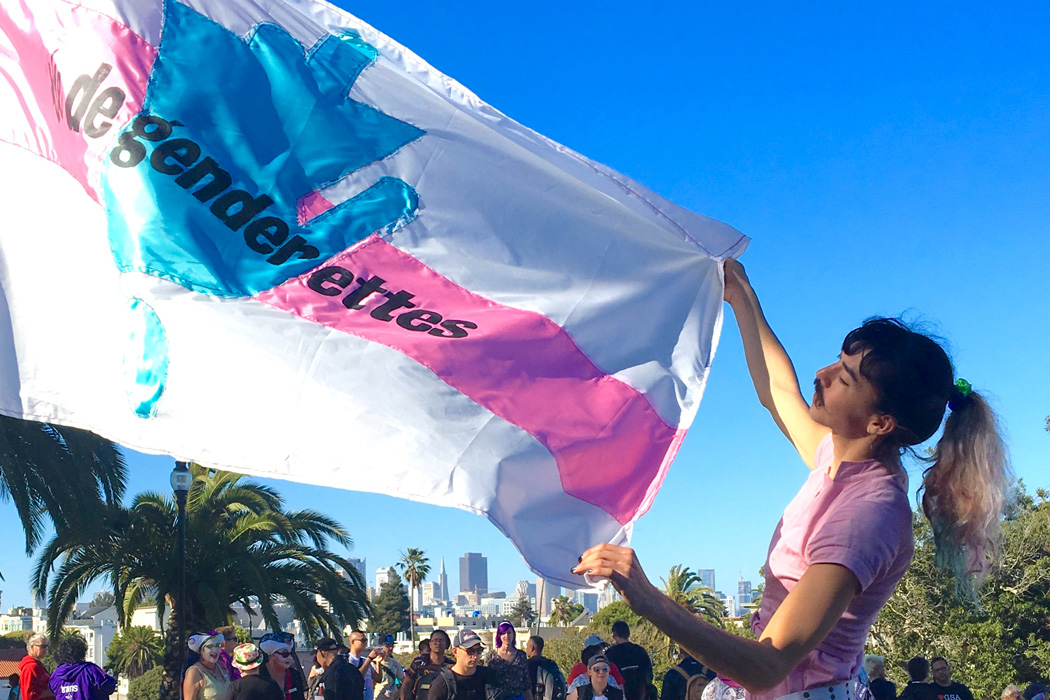 What are some of the things you wish to see others organize around in the next few years?

I really can’t speak for other Degenderettes, because there are so many trajectories and needs and ideas going around right now. Personally, though, I’m hoping that everyone steps up to figure out what they, themselves, can do for their neighbor. Don’t wait or rely on Degenderettes to save you because at the end of the day, we’re just innocuous artists – you all are the ones who have to save us. 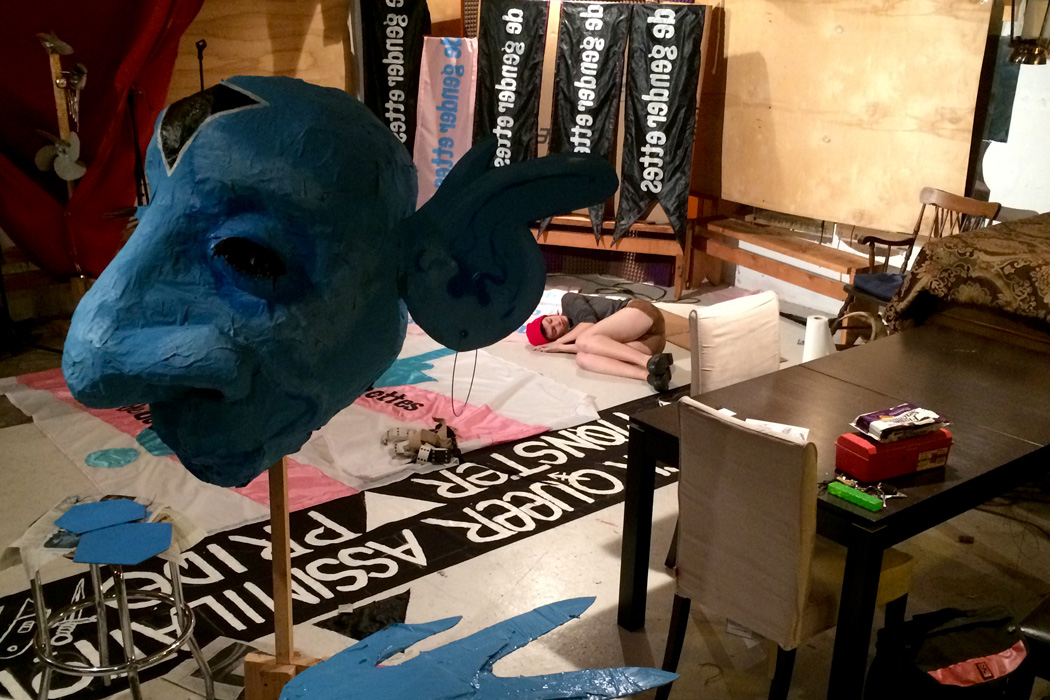 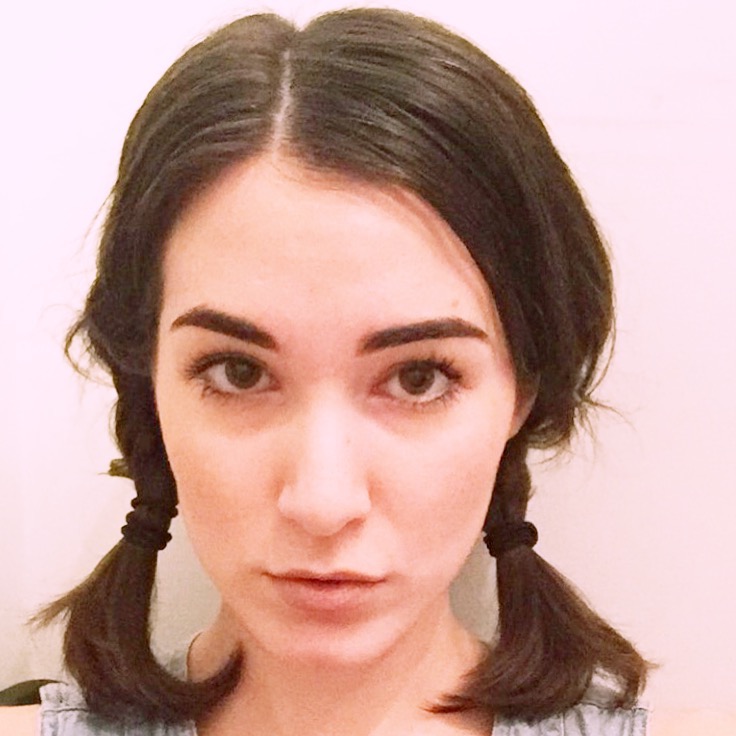