In Hong Kong, even the protests are civil. Andrew Isaacson shares his observations from the Hong Kong student protests. 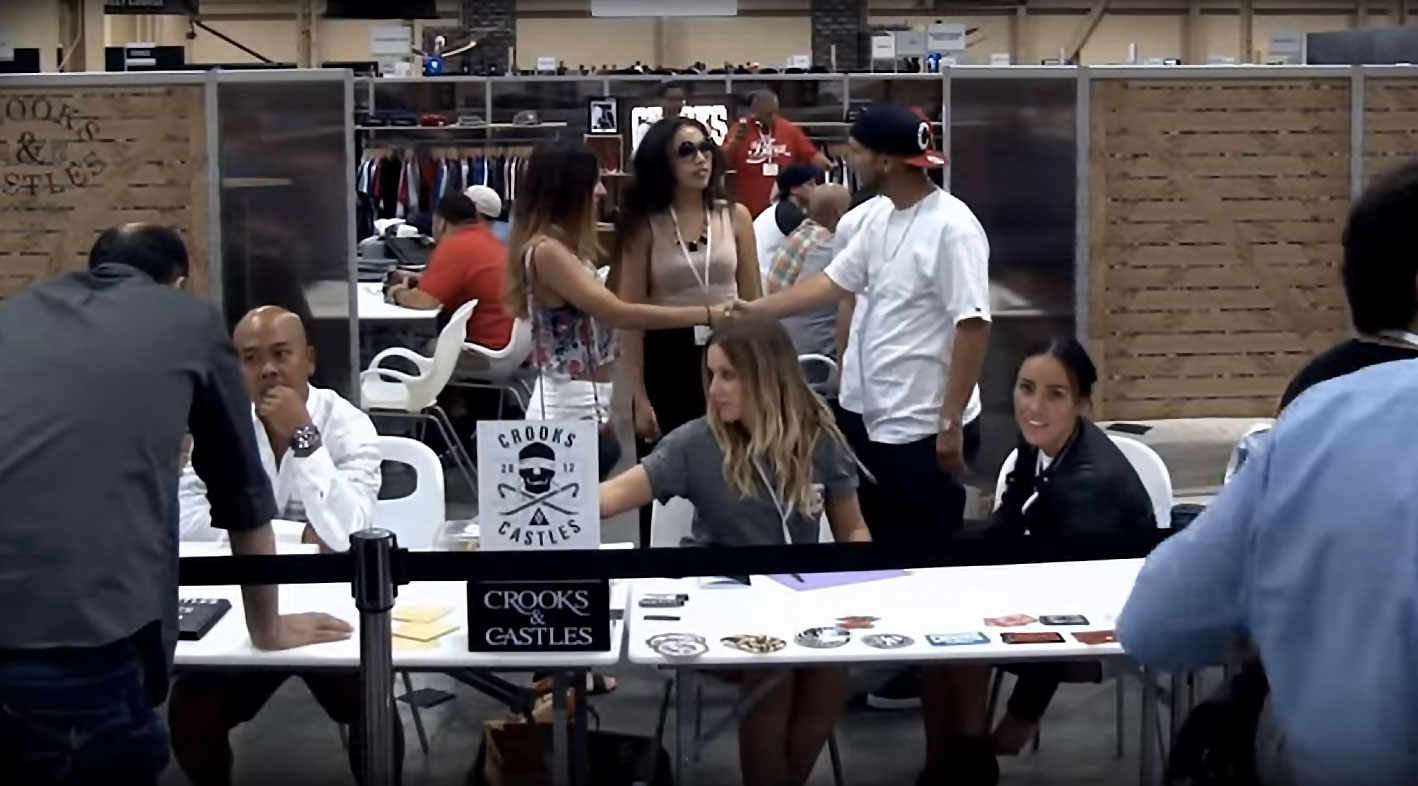 The Life and Death of Honest Streetwear

The term “streetwear” is difficult to define. Loosely, it’s casual clothing: jeans, t-shirts, ball caps, and sneakers. On one end of the spectrum, streetwear encompasses generations of underground movements, and on the other end, it serves as a mainstream phenomenon for big-suit corporations looking for cash. In the beginning, streetwear represented a heartfelt resistance to the bourgeoisie and their malls. Now, it’s as accessible as Starbucks, hidden everywhere in plain sight. After nearly 40 years of transformations, the style — along with its many variations — has been met with contempt and mockery as much as praise and admiration. I mean, we’re talking about jeans and t-shirts, here; how important can they really be? 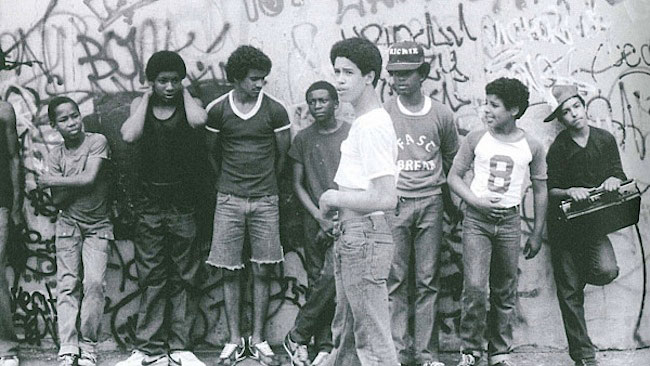 With the dawn of streetwear, fashion birthed its first modern rebellion. After hippies of the 1960s practically invented the notion of a counterculture, DIY punk, surfwear, hip-hop, and sportswear swept through America’s metropolises in the 1970s and 1980s. It all started in the late 1970s, when surfwear took the reigns on producing localized apparel that was unique to the wearer and their lifestyle. California-based companies like Stüssy and Tony Brown’s Kuta Lines started selling items like graphic tees and tanks, weaved ponchos and Balinese tie-dyed garb that were previously nameless to people who looked for clothing in everyday stores. 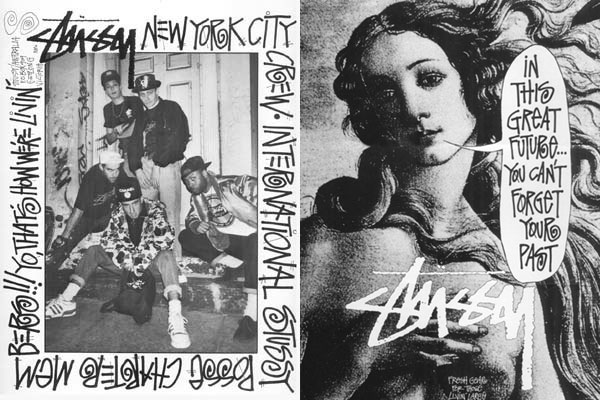 At the same time, major hip-hop influences emerged across the country. Every big city in the United States hosted groups of African-American kids wearing urban sportswear like Kangol and Adidas, and eventually Nike, FUBU, and Tommy Hilfiger, too. These brands would act as a starting point for hip-hop style, which quickly evolved when traditional African textiles, heavy jewelry, and pop cultural influences like Run-DMC and Notorious BIG (and his love of Coogi sweaters) came into play. In the streets, young people used clothing to express their interests and create a division for themselves, a culture they belonged to. Much like the designer Vivienne Westwood, who was responsible for exposing punk to the mainstream, said of herself in the 1970s: “I was just using fashion as a way to express my resistance and to be rebellious. It was my ambition to understand the world I live in.” 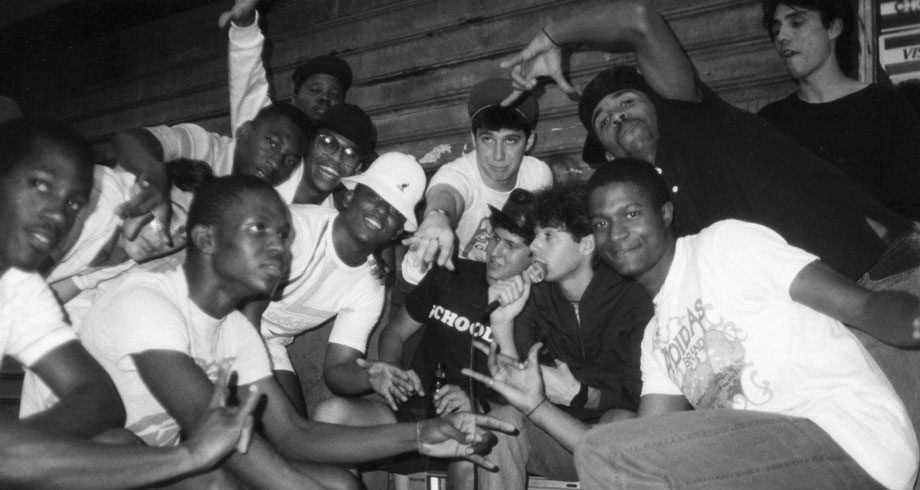 These two worlds of experimentation and rebellion—surfwear and hip-hop—crossed paths in their influences and manner of self-expression. Each were creating clothes that used homemade graphics, graffiti lettering, bright colors, and sportswear-style color-blocking — art packaged in the ease and comfort of laid-back clothing. Getting dressed was not only a matter of expression, but representation.  With the rise of skateboarding as a sport, skate attire too joined the streetwear clan. These clothes symbolized young society and merged with more grandiose notions of the possibility of sartorial creativity without the money for mall-goods or the easy access to clothes to which young people could relate. 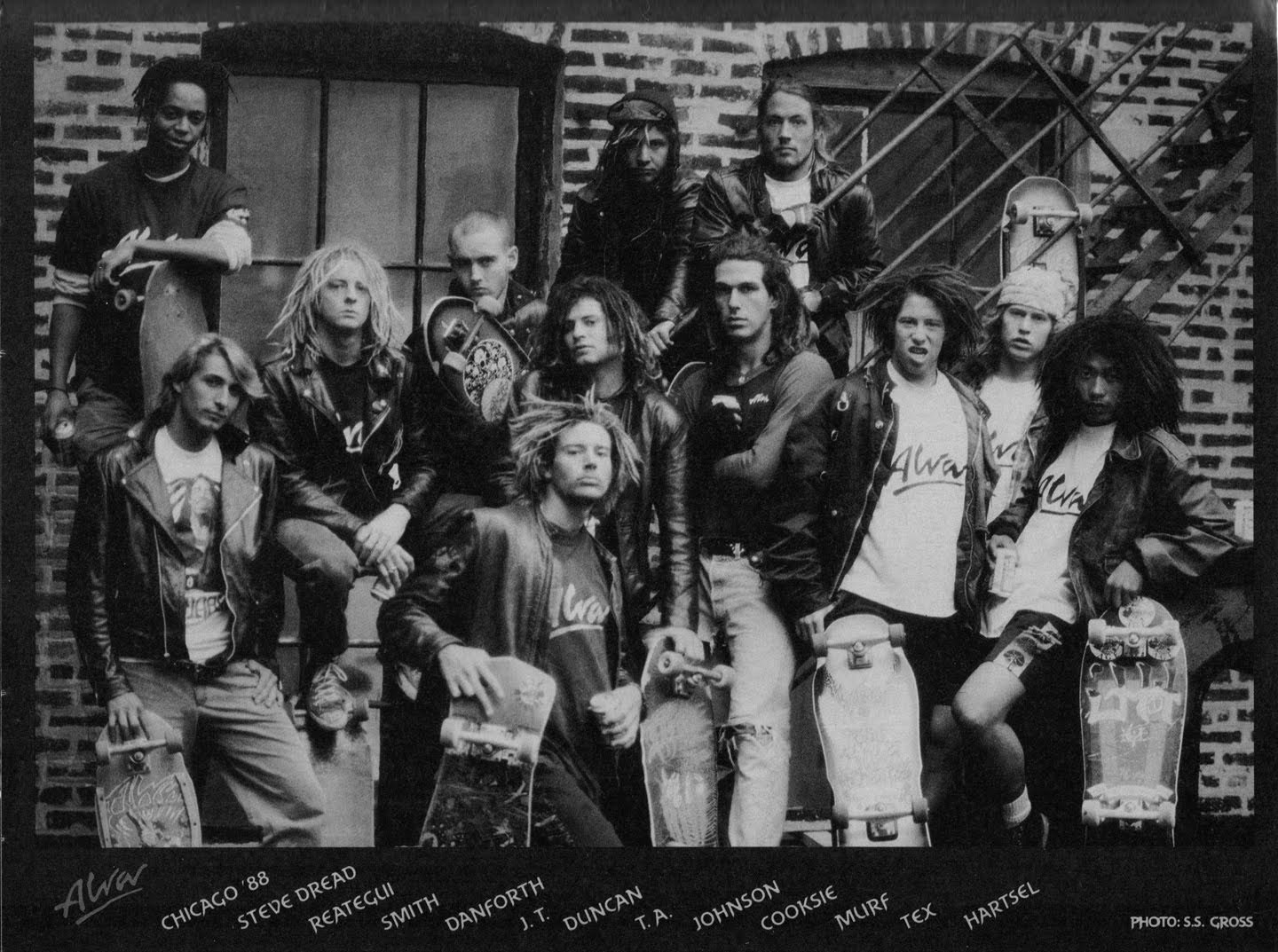 Ultimately, though, the graphic tee was territorial garb for early skateboard brands like Powell-Peralta and Jimbo Phillips’ Santa Cruz Skateboards. When Powell Peralta’s 1984 Bones Brigade Video Show sponsored Tony Hawk and Stacey Peralta, or when Harold Hunter appeared in Zoo York’s 1997 Mixtape, streetwear had clearly exited the realm of the underground and expanded to all young people looking for an identity. Big skater sponsorships like these created brand awareness, but once entered into the consciousness of the mainstream, it was theirs for the taking. 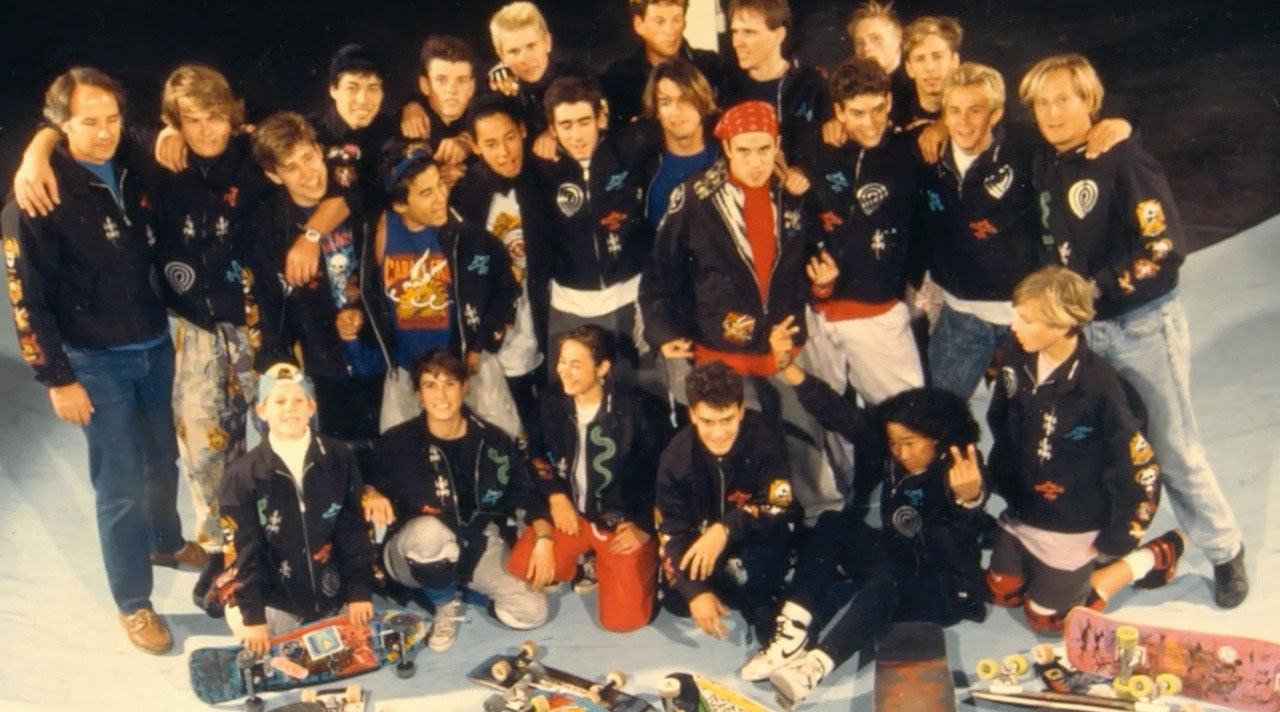 Inevitably, the surge of skate culture in the mid-90s made streetwear ubiquitous—accessible in malls, flagship stores like Stüssy’s New York location, and eventually around the world. Stüssy’s “International Tribe” encouraged Japanese designers like Hiroshi Fujiwara and both European and East Asian audiences of the growing street subculture. There were suddenly streetwear brands growing out of every pocket of the world. By 1995, young people everywhere were well acquainted with Supreme’s red box logo, Maharishi’s camos, and Airwalk’s kicks.

Since its introduction into the world and subsequent growth into conventional culture, the streetwear attitude of individuality and a rebellious counterculture persists. While most subcultures tend to reflect a singular rebellion from the norm, streetwear continues to defy its own success and recognition. Its reach into hip-hop, surf, skate, and DIY punk subcultures are not enough, even with glowing celebrity nods like Pharrell’s creation of the Billionaire Boys Club and Kanye West’s inclination toward streetwear fashion design. For those looking to affect different stylistic corners of the world and discover new methods of expression, streetwear’s preexisting subcultures are still too streamlined, too accessible, too booj-waaah.

Online shopping has granted people access to a wider range of goods from a variety of cultures, a habit that has propelled a new kind of streetwear revolution. Sure, there remain the well-known brands like Adidas and Nike to represent casual sportswear; Billabong and Quiksilver for surfwear; HUF and LRG for skaters. But there are smaller, more diverse outlets for new genres of streetwear that exist in cyber malls not everyone knows about. The new underground has introduced health goth, a sterile, ironic approach to life beyond the plain stage of normcore’s bare-bones aesthetic; sneakerheads obsessed with the latest trends and luxury collaborations; and minimalist streetwear movements sparked by brands like Pigalle and Stamp’d. It’s a generation of deserved information: either you’re in on the secret as an earned Internet scourer or on the outs with the streetwear elite. 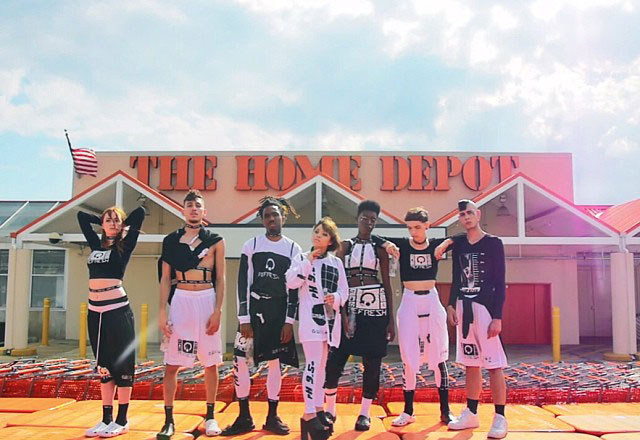 The downside of streetwear’s consistent rebellion is its insistence on playing hard-to-get or, nowadays, creating a realm in which streetwear only truly exists for the wealthy enthusiast. At one time, you may have only needed to be young and know streetwear existed as a culture to be a part of it. If you had some chinos, sneakers, and a Starter jacket, you were golden. In clear opposition, the streetwear of today is more avant-garde than the styles of yesteryear. Expensive brands are constantly popping up with fluxing popularity and in often hard-to-tie-down, limited quantities.

When a snake grows too large for itself, or fears infection from surrounding parasites, it naturally sheds its outer layer of skin. Streetwear’s small, 1970s vision grew overwhelmingly for its initial duty: to serve crews of street teens looking to individualize their tees and sneaks. After skater brands became the go-to for any teenage boy, and mainstream, big-box names took over identifying the movement — think Karmaloop, shoppers moving stock to Ebay for price knock-ups, and Complex Magazine — an excess of streetwear brands hit the scene (both online and in boutique stores) to change its direction into a more expensive market, picking up over $150 for hoodies and collaborating with celebrity endorsements like Jay-Z for Diamond Supply and A$AP Rocky for SSUR. The style had evolved again, and will likely still find room to grow. As such, true streetwear seems not to exist in the products that represent it, nor in the styles that come and go under its name. Instead, streetwear is an action, or perhaps even a pact between its past and future: to consistently reveal a new skin, if only slightly different from the last, to ward off contamination and slip quietly onto new paths of discovery.