One Simple Way To Support #Ferguson. If you’re time zones away from Ferguson, wondering “what can I do?!” this is what you can do: Donate money to support arrestees. 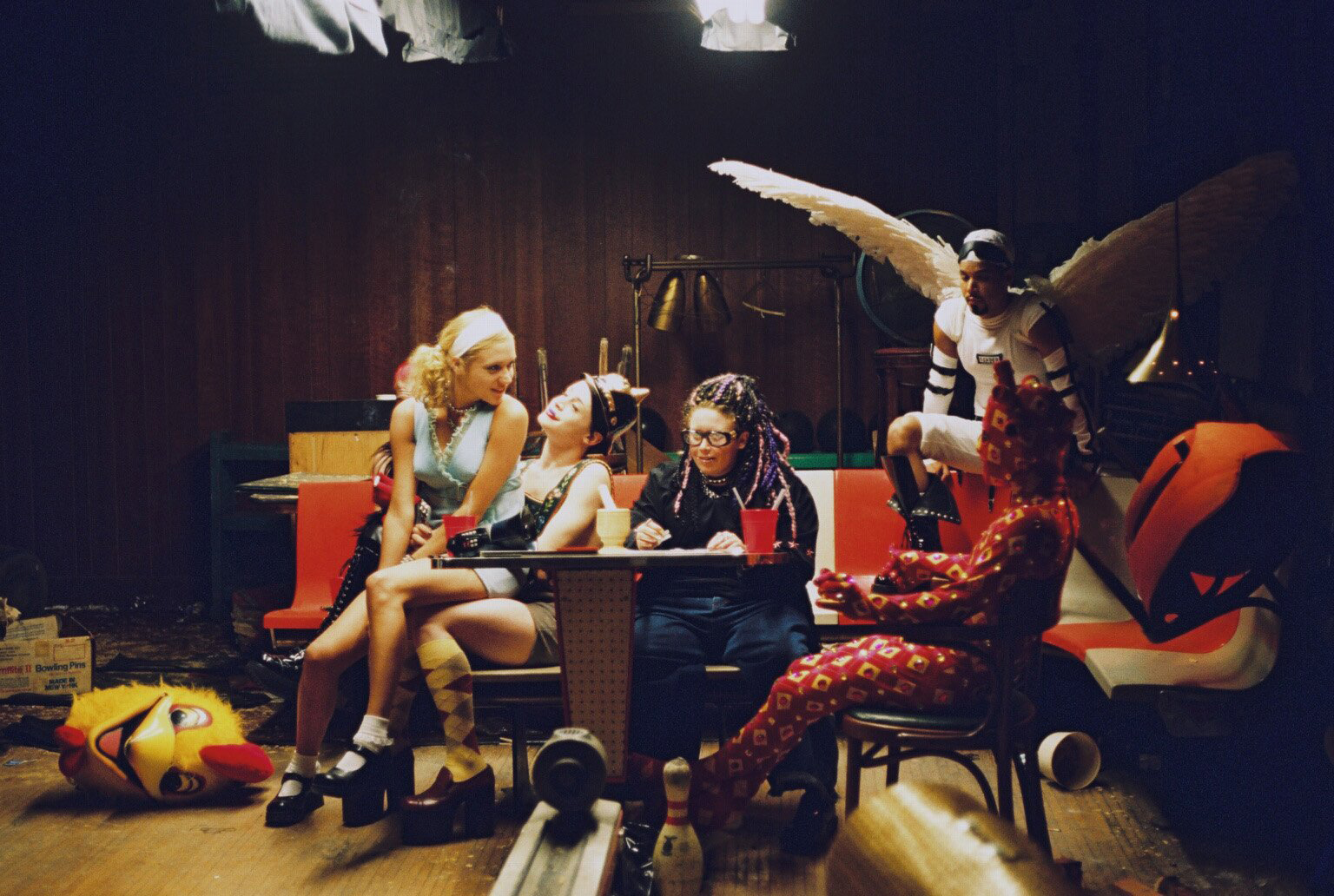 Getting Dressed for Drugs

In a hazy, morning-after light, piles of teenagers lay sprawled over one another, half-naked and asleep. Hands are tucked into bubbled-out boxer shorts strapped midway by loose belts and even looser skater jeans. They’re near perfectly unkempt: a vision of adolescent comfort and disarray. In the final line of Larry Clark’s 1995 cult classic, Kids (1995), a topless teenaged boy wakes up, saying “Jesus Christ, what happened?”

In the mid-90s, drugs happened. Or, at least, we had become so used to them that witnessing drug-addled teens on film was possible. This newfound acknowledgement of teen rebellion not only brought on revelations of their lifestyle choices – signaled in films by raging parties, morning blur, and bad-influence friendships – but also their way of dress. It was an era for the alternative teen clad in unflattering jeans, hooded flannels, FILA sweatshirts, branded streetwear head-to-toe, and Converse All-Stars. It’s like Cher said in Clueless (1995) of the boys of her generation: “I don’t get how guys dress today. I mean, c’mon, it looks like they just fell out of bed and put on some baggy pants, and take their greasy hair […] and cover it up with a backwards cap…” These pothead adolescents were the same examples seen in movies like Mallrats (1995) and Clerks (1994): bed-headed teen boy characters like Jay and Silent Bob with haphazard looks characterized by oversized clothes and questionable hygiene.

Come the early 2000s, the drug-induced sartorial expressions that birthed these pothead skater boys were everywhere in mainstream culture, along with heroin chic, club kids, and 70s-era cocaine cowboys. Decades of uninhibited substance abuse gave rise to genres of dress that extended beyond preppy, punk rock, or even avant-garde. Club kids created their own brand of a neon-clad punk rock fantasy fashion; drug lords chose the Miami Vice appeal with Liberace suits and crisp, collared shirts left unbuttoned around the neck. For the latter, it was clothing that revealed their unadulterated cash and power. Think Milo in The Pusher Trilogy (1996-2005), Frank White in King of New York (1990), and Nino Brown in New Jack City (1991). Between the early 90s and 2000s, movies about drugs inspired generations of explorative, delirium-induced fashion choices.

“The road of excess leads to the palace of wisdom” says James St. James to Michael Alig in Party Monster (2003). Dressed in a rainbow-sequined, oversized blazer (a surprisingly casual alternative to his usual club-hopping ensembles), St. James’ William Blake quote acts as an entry-level mantra to using club drugs like ecstasy and LSD. Throughout the film, his imaginative fashion choices match his excessive drug use and subsequent hallucinations. Party Monster’s inward drug fantasies are manifested in outward appearances typically reserved for fairy tales: fantastic costumes, fluffy props, themed parties, escapism. Drug use dictated the tales told by fashionable exteriors and vice-versa. These uninhibited creatures of the night used clothing to express their nightlife addictions. 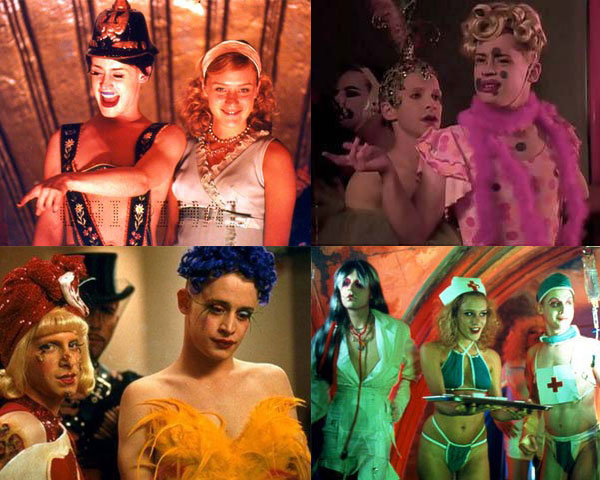 While club kids recreated a whole world unto themselves to reflect the hallucinations their minds went through, teen films about narcotics revealed the role drugs played in the self-identification and peer socialization of high school kids. This teenage drug use, while tame in comparison, exhibited a rush to explore newborn freedoms and inhibitions not unlike the club kids’ escapist tendencies. Kids started to forgo responsibility to have fun discovering themselves. Between Kids (1995), Dazed and Confused (1993), and Fast Times at Ridgemont High (1982), this drug use and abuse was communicated by the characters’ outward appearance. Slack-jawed potheads enjoyed a grubby exterior and overall laissez-faire attitude that matched their drug of choice. Non-descript t-shirts, baggy jeans, worn-down sneakers, toplessness, visible boxer shorts and backwards caps dictated that these dudes preferred affordable, part-time drugs like weed. Their clothing narrated their narcotic inhibitions. The drugs predicted the lifestyle.

When Kate Moss made heroin chic happen in the early 90s, films like Trainspotting (1996) and Pulp Fiction (1994) were quick to follow with the same glassy-eyed, hollow glamour as the famed 1993 Calvin Klein ads. Girls associated with drug culture wore glimmering spaghetti strap dresses to reveal poking collarbones à la Diane in Trainspotting, sported sunken eyes and short shorts in Nowhere (1997), and wide-eyed, blurred mascara paired with cheap tight clothes and girlish bright colors like Brittany Murphy in Spun (2002). It seemed like the more messed up, luxurious, or addictive the drug, the more likely that fashion choices would tell the same story. 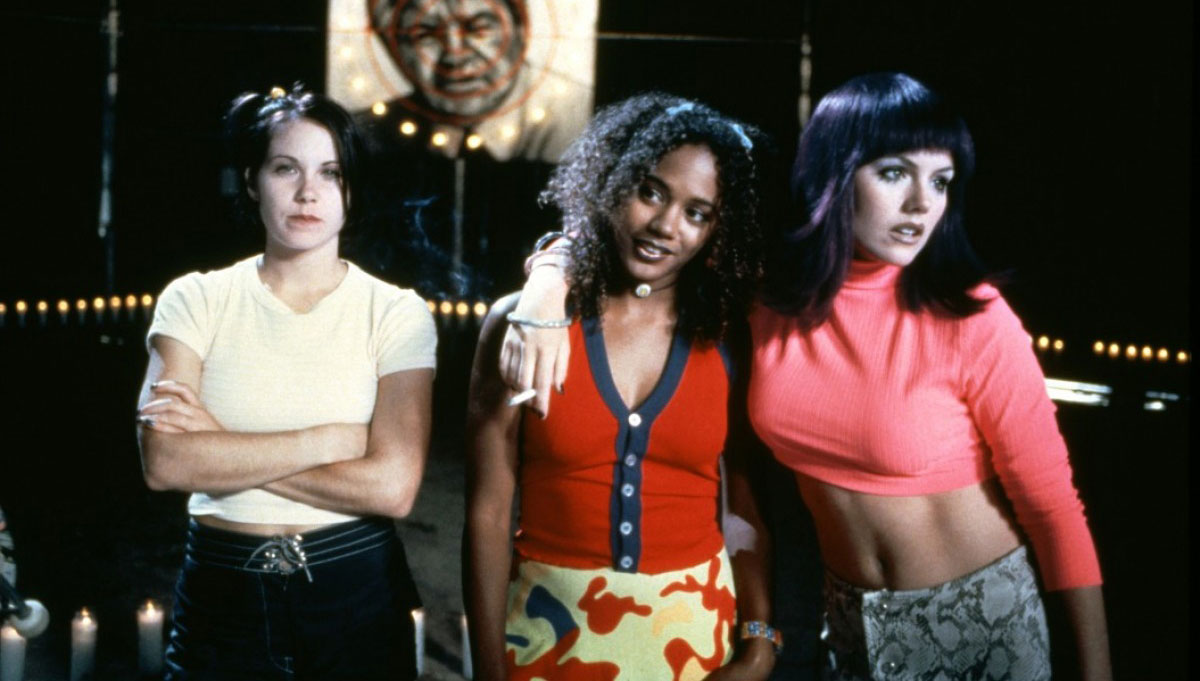 “We were young, rich, and in love,” said George Jung in Blow (2001) as he embraced Penelope Cruz in a passionate kiss. Early cocaine characters like Jung pushed high-end, hard-to-get drugs on the scene and exerted a powerfully chic wardrobe of fitted suits, gold chains, and decorative lapels – a wardrobe that was equally as intimidating and difficult to acquire as cocaine. In the world of luxury drug warfare, the rewards were as high as the risks. Narcotics introduced a liberated status of wealth that, while in another rank of excess and class, was similar to the free-spirited styles of drugged-up teens in that these personal associations with drugs weren’t hidden but expressed outwardly. Jung had pure leather jackets, sleek sports cars, gold rings, and designer sunglasses. He embodied cocaine in style. 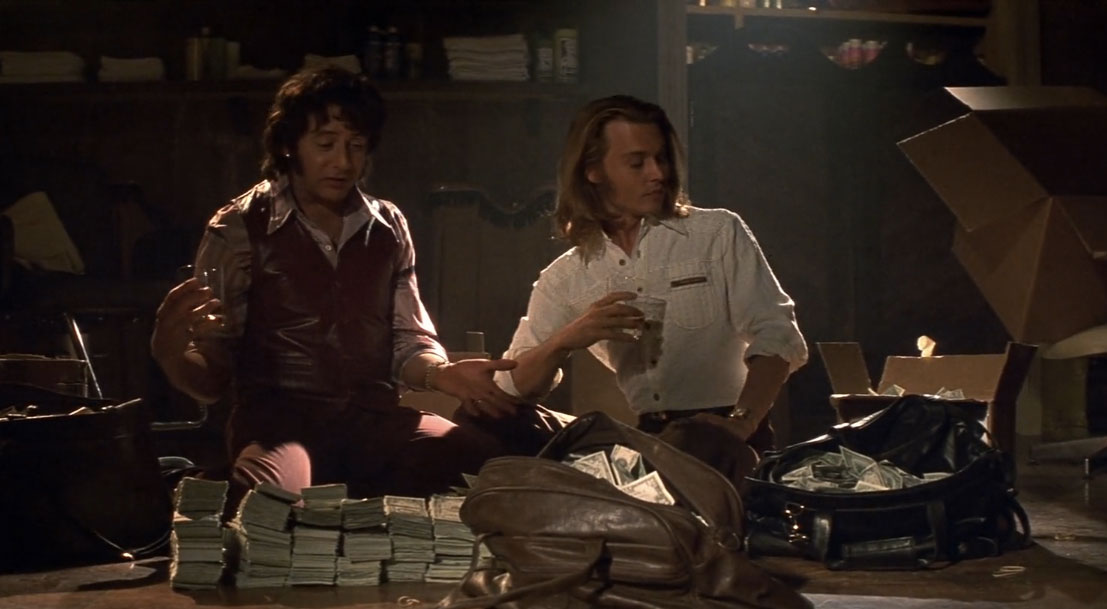 Associations between drugs and self-identification don’t just happen because you smoke pot or shoot heroin. Doing drugs split users into personas that embrace the culture of each lifestyle: the lazy pothead; the coke-laden stripper; the fast-talking drug lord. Wardrobes are laced with the traces of these changed people.

Today, an onslaught of soft-grunge Tumblr kids and Miley Cyrus on molly have dictated the world of drug-inspired clothing. The 2010s have been about revisiting 90s styles in a strange, intentional amalgamation of form and blatant endorsement of drug culture, where fashion takes the same shape as those of 90s pothead kids and their girlfriends – crop-tops, sportswear, loose jeans, track pants, beat-up sneakers – but with decorative weed leaves, big yellow happy faces, and ironic piles of money. There’s a sarcastic pointing to the excess of cocaine and eccentric club kid drug culture that came before – mostly worn by those whose actual drug use is questionable and who were too young to know what films like Kids and Dazed and Confused really meant to the generation before them. These films enabled today’s youth the freedom to explore the outspoken styles of those who were once not accepted by mainstream society – ones that started a conversation between drugs and what kids wore when they were doing them.