Let It Rot A recipe for scallion kimchi that can melt your face off, if you want it. 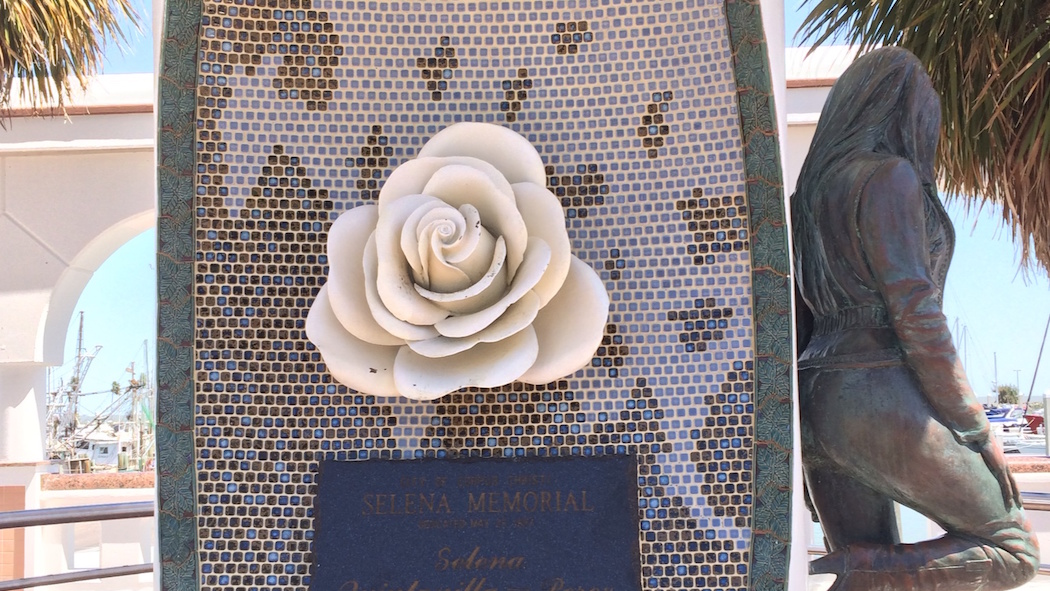 21 years after her death, Miranda Leigh took a trip to Selena’s hometown and realized the south Texan popstar is more famous now than ever.

The Astrodome lights fell, then turned bright again. I remember she waved to us, her fans, like a beauty queen in a horse drawn carriage. People threw flowers. Then she came onstage wearing that iconic purple jumpsuit. “How you doin’ Houston, Texas?” she said.

I was only five, so I don’t remember much. For what I can’t remember, I watch the first scene of Selena starring J.Lo, and keep watching, knowing that the final scene will break me every single time.

Selena’s last concert was my first. 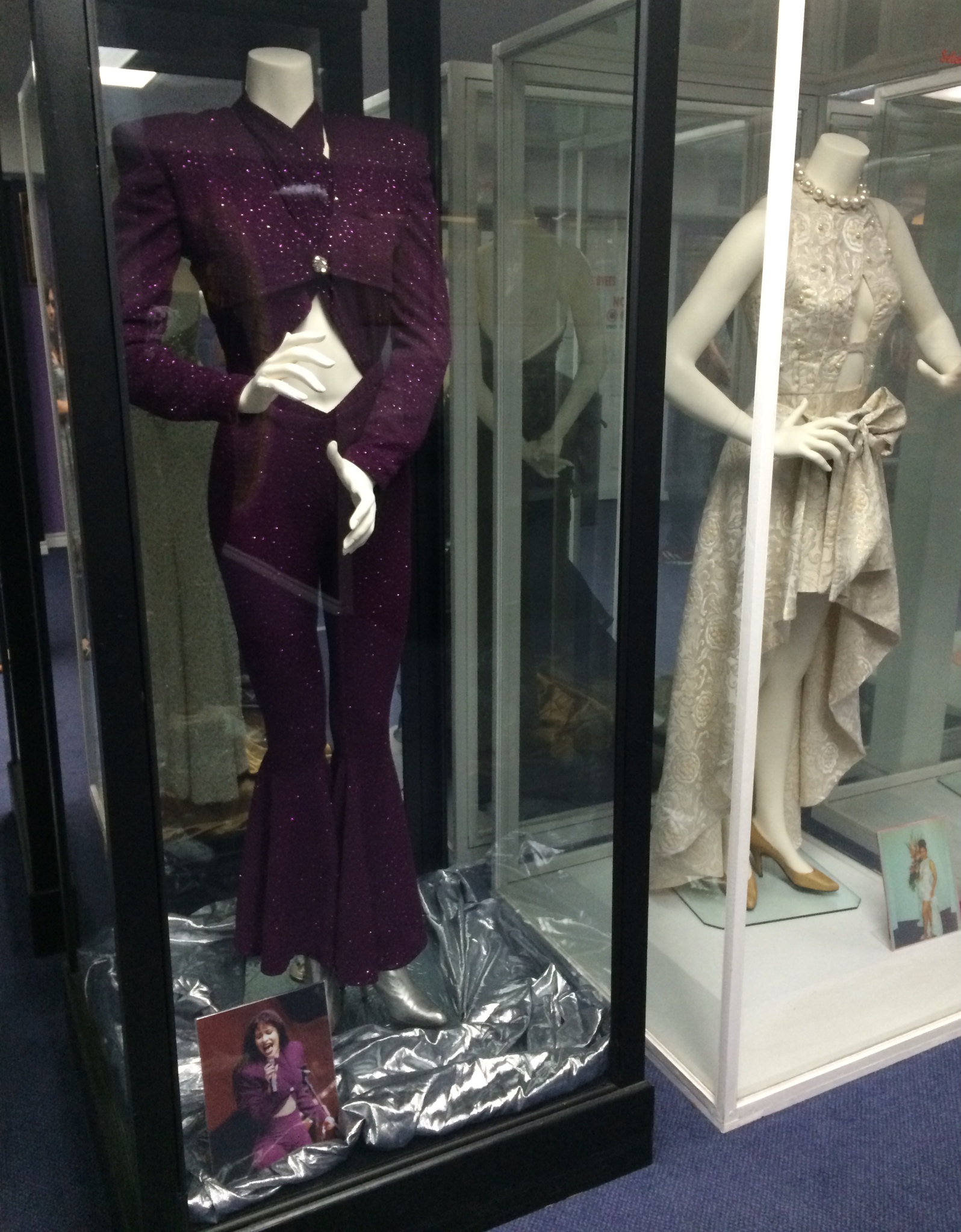 The iconic purple jumpsuit Selena wore at her final concert, now on display the Selena Museum in Corpus Cristi, TX

A few weeks ago, my best friend and I drove from Houston to Robstown, the small town my mother was born, raised in, and recently returned to after 40 years of living in Houston. It’s 20 minutes from the closest city, Corpus Christi – Selena’s hometown.

My mother’s younger brother, my uncle, owns a neighborhood yerberia locally known for their Valley lemon raspas, as well as their colorful candles that promise things like love (“Ven A Mi”/ “Come to Me”) and protection from enemies. Every Thursday, he receives a shipment of lemons from the Valley, driving from Robstown to Corpus Christi to get them. Desperate to drive with my mother somewhere other than Whataburger, I asked if could we pick up the Valley lemons for him.

We met a woman in a parking lot fruit stand sitting down with, but not reading, a Bible surrounded by cardboard boxes of fruit. We picked up three boxes of orange-colored lemons, filled to the top, and put them in the backseat. 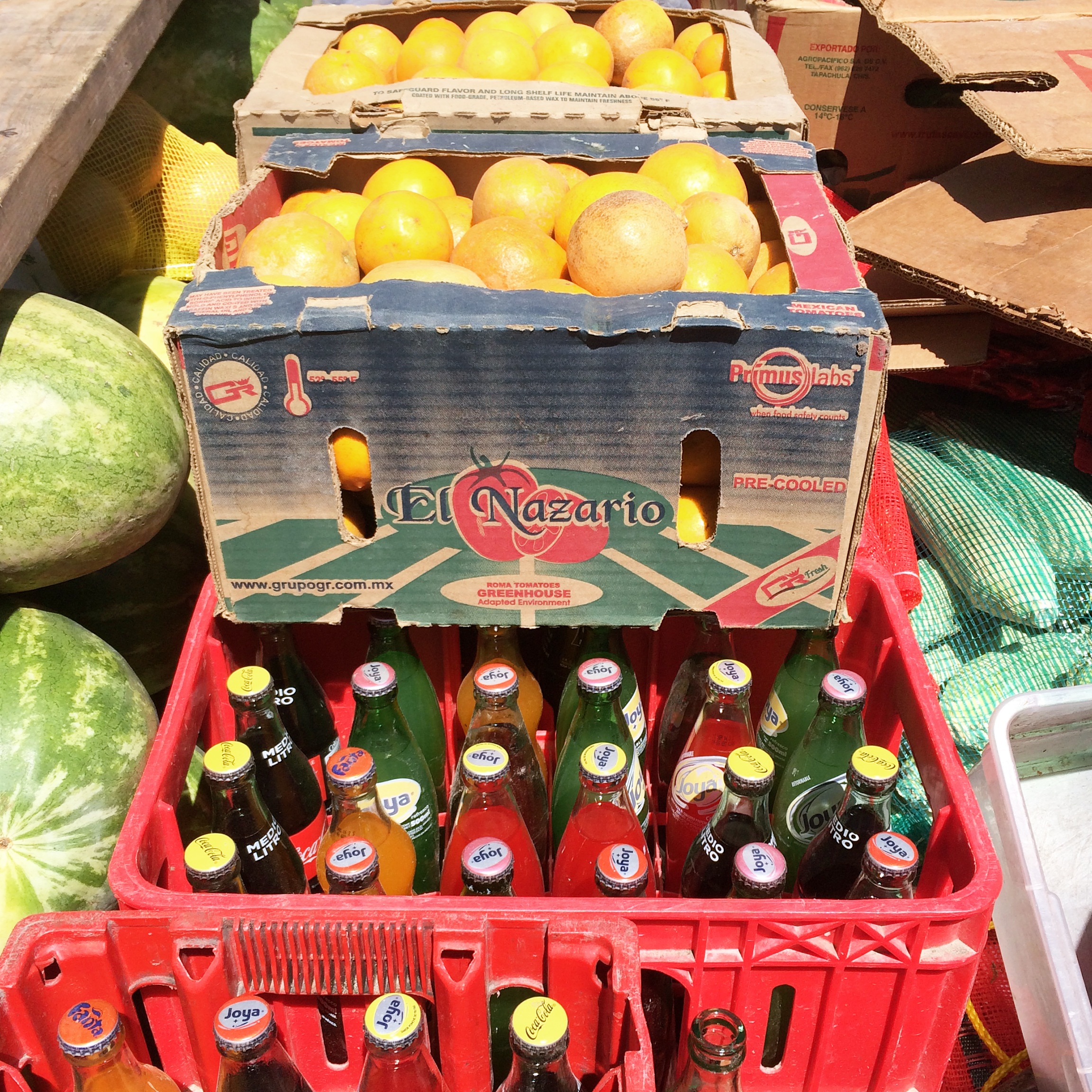 Lemons brought us there, but Selena made us stay. We reached the holiest of places: Mirador de la Flor, which in English either means Overlook or Watcher of the Flower. As you walk to the memorial – a plaque, tiles, a single white rose (her favorite flower) – you finally see La Reina herself leaning against a column, microphone in hand, wearing her iconic bustier, jacket, rhinestone belt, high-waisted jeans, and cowboy boots. She was literally larger than life. I am taller than she was, but here, she towered over me. I paid my respects and got back into the car.

We couldn’t leave Corpus yet, not without stopping at the Selena Museum. Seen from the long stretch of road, it’s easy to miss this low, sand-colored building which looked not unlike the one next door – an oil and gas distributor. I only recognized it by the purple awning with Selena’s signature written on it. 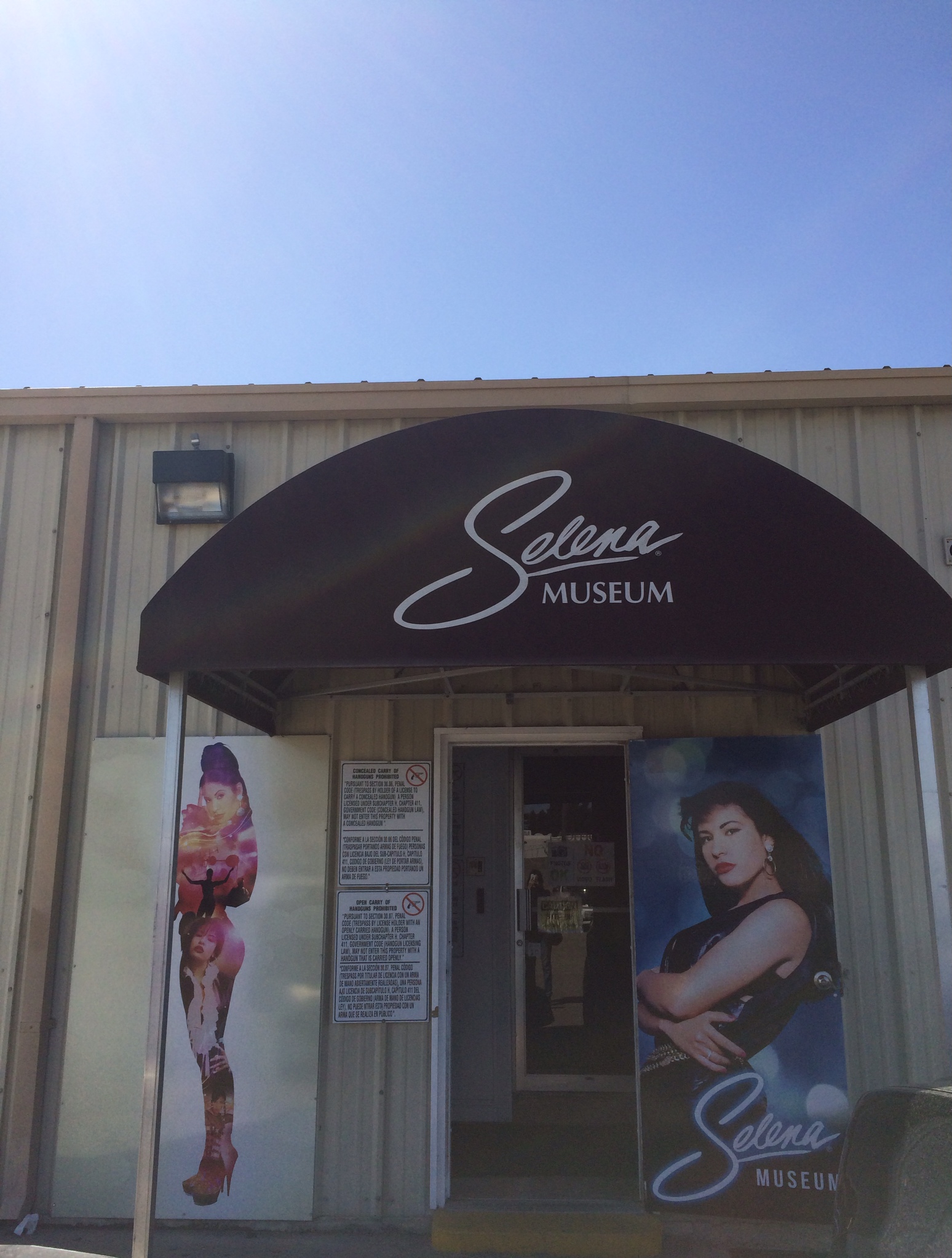 Entrance to the Selena Museum

As we went in, I heard the receptionist, a woman in a black rhinestone cap, say into the phone “Sure thing, Mr. Q.” Mr. Q, I assumed, was Abraham Quintanilla, Selena’s father, who is behind Q Productions, the recording company that shares space with the museum. (I later learned that Mr. Q is there most days. Along with Selena’s sister Suzette, they often give tours and talk to fans.) The museum guide took our group of 10 to the studio where Selena was recording her English language crossover album, Dreaming of You – the same studio where J.Lo as Selena records “I Could Fall In Love.” In this scene, J.Lo’s dark red, almost brown lipstick is burned in my mind, but Selena’s actual microphone is still stained bright red. 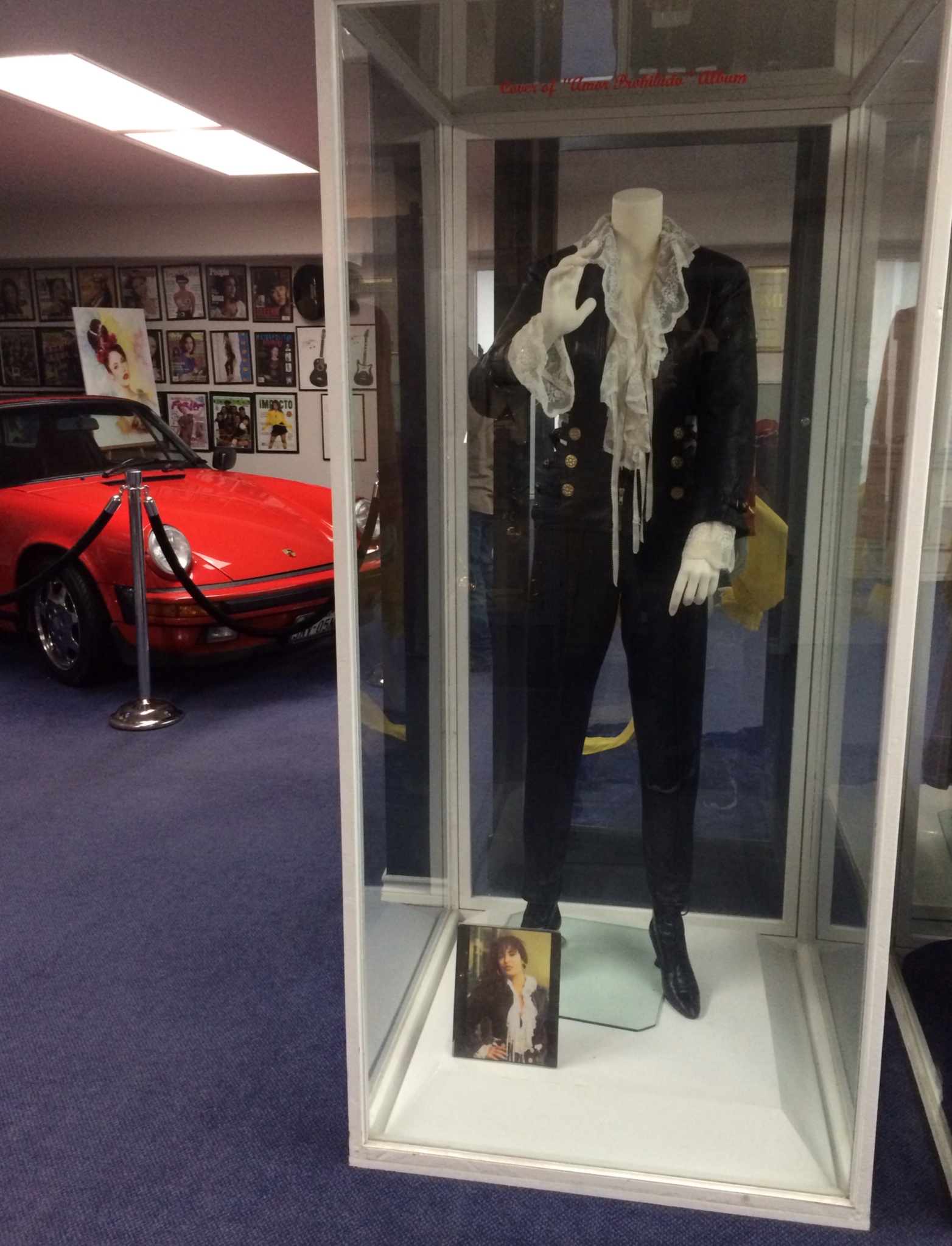 The next and final room is a celebration: it holds Selena’s Grammy; wall of gold and platinum records; her teen clothing design sketches (“Moonchild Designs” – Selena is “Moonchild” in Greek); her red Porsche parked in the corner, the cowboy boots she wore and the belt buckles presented to her at the Astrodome concerts; and her outfits on mannequins in glass cases, including the iconic purple jumpsuit from her final show.

On April 12, 1995, two weeks after Selena was murdered, Texas then-governor George W. Bush declared that Sunday, the 16th – her birthday, which was Easter Sunday that year – Selena Day in the state of Texas. Bush said that Selena represented “the essence of south Texas culture,” but in Corpus Christi, every day feels like Selena Day. There, Selena isn’t just La Reina – she’s a saint. In Mexican restaurants and corner stores like my uncle’s, it isn’t uncommon to see the poster of Selena from the Corpus Christi Caller-Times hanging next to portraits of Jesus Christ and the Last Supper. 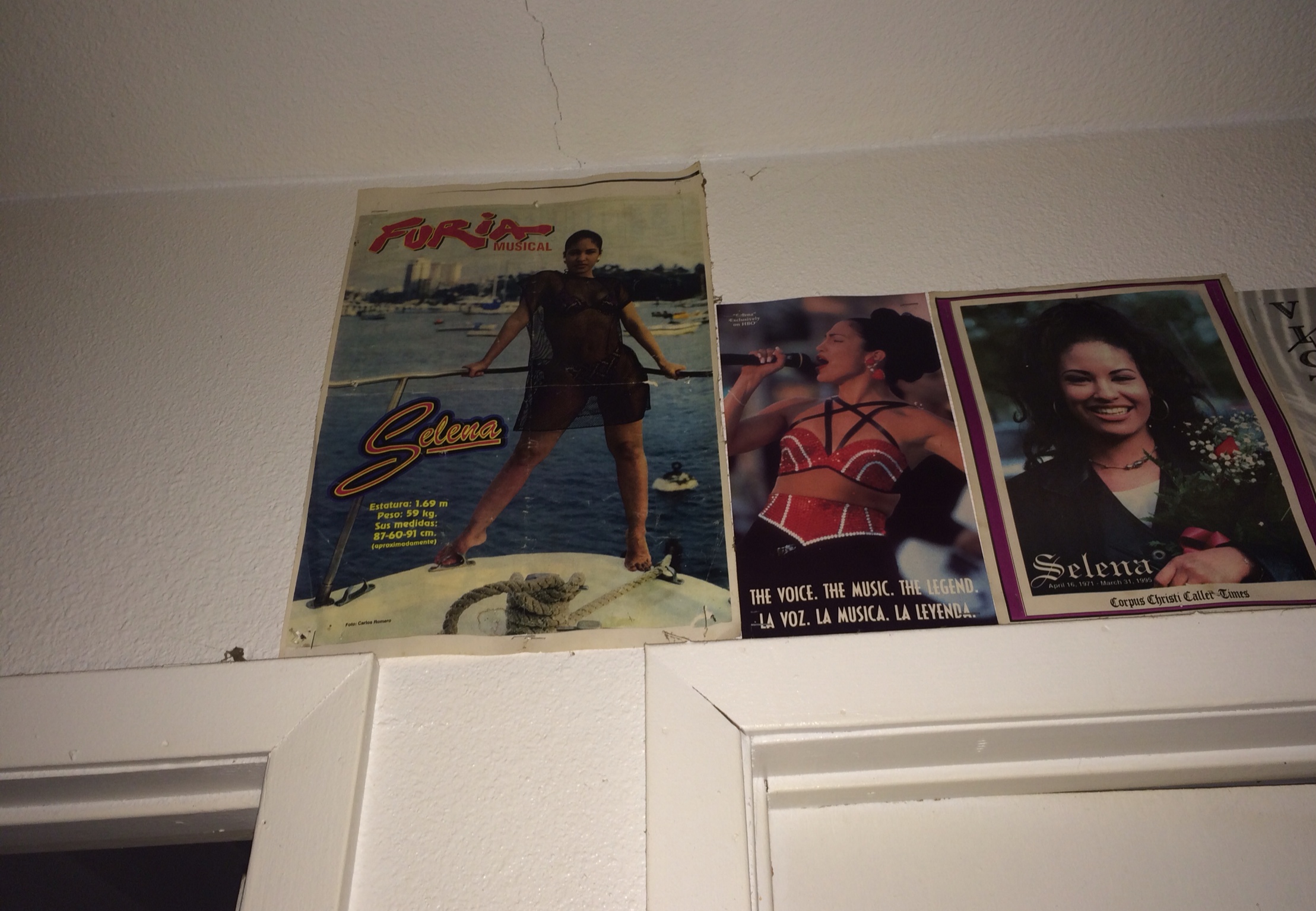 In the back of my uncle's store

21 years after her death, Selena seems more famous than ever. This year, she’s getting her own line of MAC lipsticks. Kylie Jenner recently wore a t-shirt covered in Selena pictures that said “We Miss You.” There was an article saying that we need to thank Kylie Jenner for wearing that shirt, but who is “we”? The young girls who mark their calendars for Fiesta de la Flor or the women who bring holy water with them to the Mirador de la Flor?

Growing up, I didn’t see anyone who looked like me portrayed in the media. I had thick, unmanageable long brown, almost black hair, thick eyebrows, and sideburns. I liked singers like Madonna and Mariah, but Selena was ours. Selena belonged to little girls like me – Xicanas who didn’t speak Spanish. My second language is Spanglish and even after Selena learned to speak Spanish (phonetically, through her music), she would make mistakes like forgetting how to say “fourteen” in Spanish and saying instead “diez y cuatro” before recoiling in embarrassment. 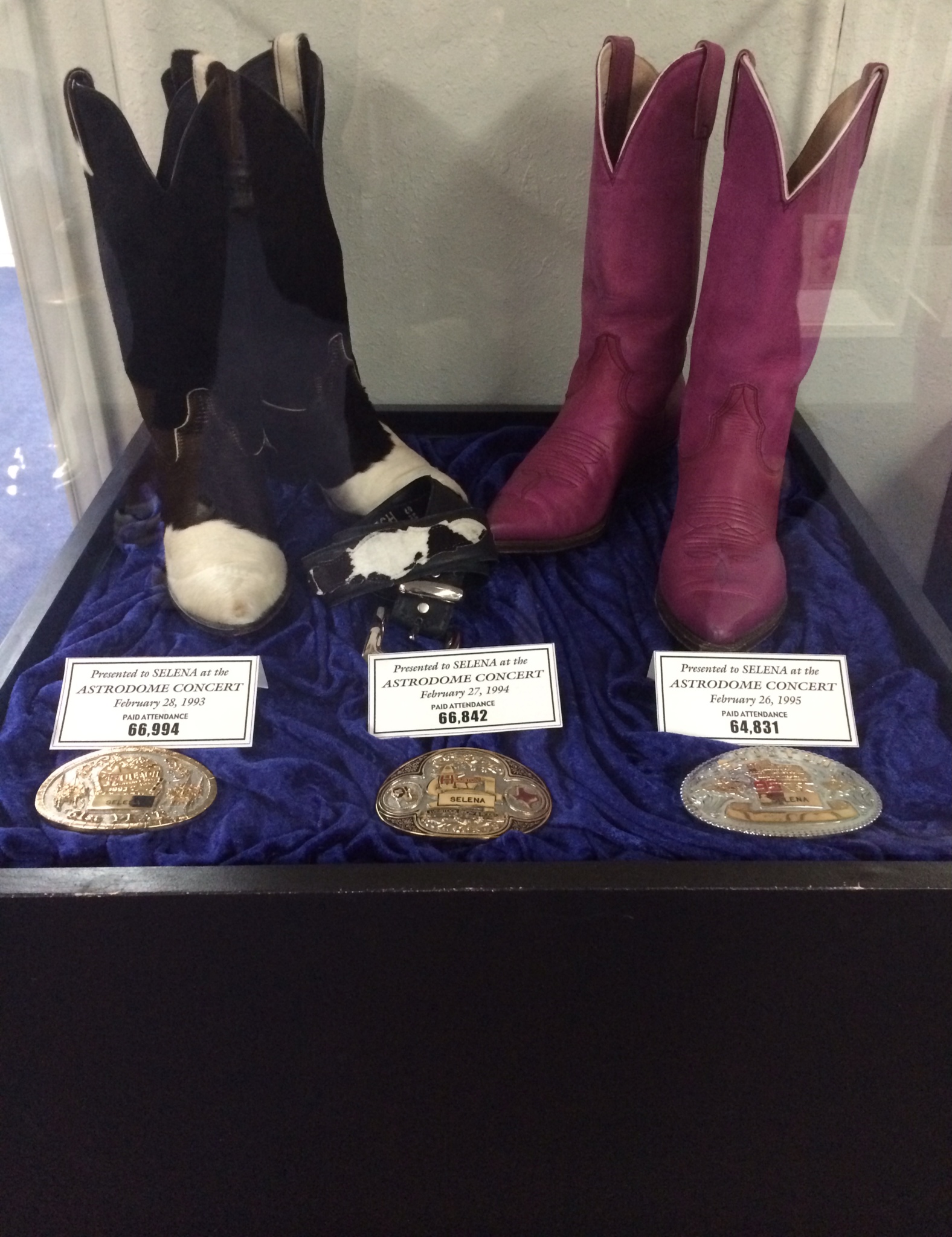 Belt buckles presented to Selena at her three Astrodome concerts

Texas is so big; I didn’t know how Selena got beyond it. After her death, I didn’t know how famous she was. I thought only Texans knew who she was. Looking back now, perhaps I couldn’t believe a brown girl could be so famous. But she was. As she was working on her English language crossover album, she was being introduced to a new audience in America as the “Mexican Madonna.” Selena had a last name, but she didn’t need one. Like Madonna, she was simply Selena.

Selena was shot dead by her fan club president over a financial dispute before her dream of recording an English language album was made a reality. Selena wasn’t just about to cross over into English – she had already crossed into Spanish – she was about to cross back over into her first language. She was only twenty three when she died, but she was more things than most of us will ever be – an American-born of Mexican descent, a Texan, a Madonna, a queen, a saint, an emoji 🌹. 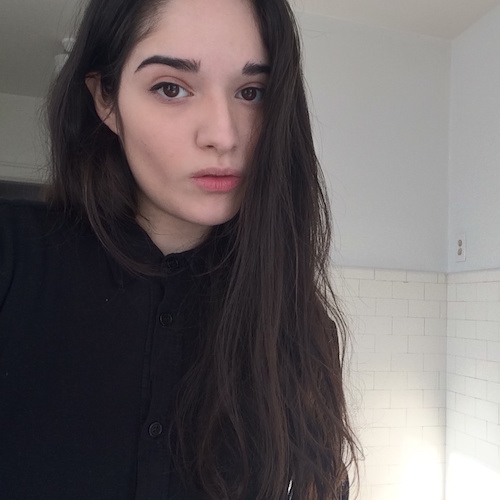