Ayy Batta, batta! Swing, batta batta! A street preacher was shouting homophobic stuff outside a high school, he got clubbed with a bat.

The Pope watches beauty vlogs Francis met with Youtube stars and now he is encouraging the youths to become internet famous. 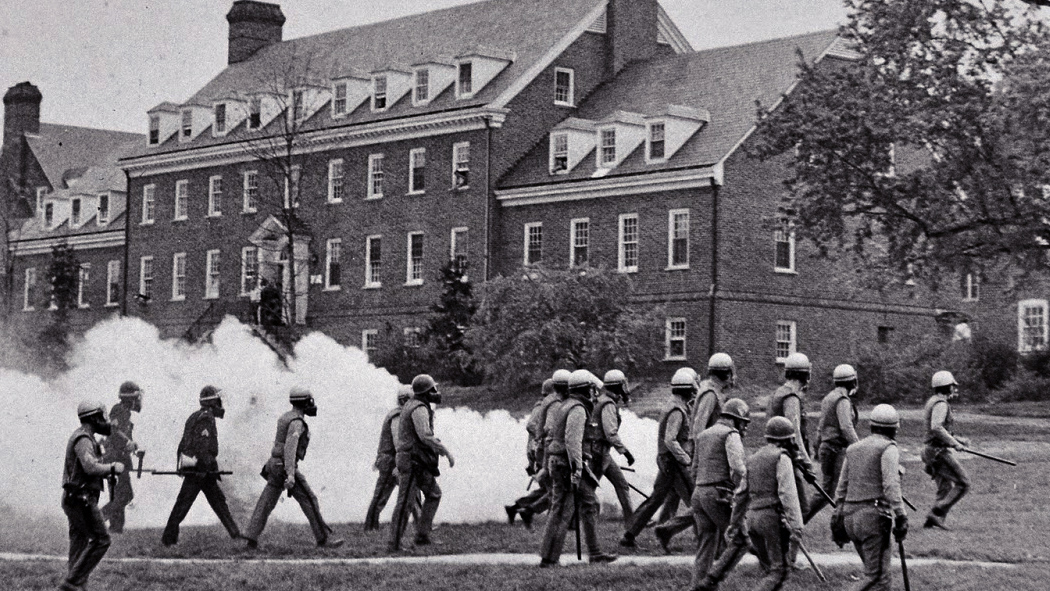 State police march on University of Maryland campus, May 1970

At 18, I didn’t give a shit about going to college. I got into my first choice school, Penn State, but it was out of my league financially (I can’t tell you, 13 years later, why I felt like that was the school where I belonged). I had spent the last twelve years in expensive private schools, even though I didn’t have wealthy parents who wouldn’t whoop my ass at the mere mention of “taking a year off.” Not going to college was simply not an option.

I grew up in the age of A Different World, with “A mind is a terrible thing to waste” booming through the single TV speaker during commercial breaks. For my family and the families in our all-black middle-class neighborhood, college seemed the greatest determinant of success. I would be the first in my family to go to a proper university, as I’d been groomed to do ever since I was a “young, black and gifted” six-year-old reading for Mrs. Harrison at Calvert School (alma mater of John Waters).

Through middle and high school, I would attend an all-boys private school, Gilman School, receiving an incredible education I was hardly grateful for. Neighbors and family who saw promise in me regardless pushed for college, and even provided modest scholarships as incentives. I thought the money would be better spent on PlayStation 2 games. I studied hard and burned out, suffering from both junioritis and senioritis in an environment where students of all races were pushed towards the Ivies and elsewhere. At the same time, I was reminded that I had to work twice as hard to get half as much as my white counterparts. That meant extracurriculars, athletic and otherwise, no transgressions (I was reprimanded and suspended for “honor violations” regularly), and keeping alive a sheer determination to win.

I graduated by the skin of my teeth, grateful not for the opportunity to attend arguably the best school in the state, but rather to leave, enrolled in college mostly to get people off my back. 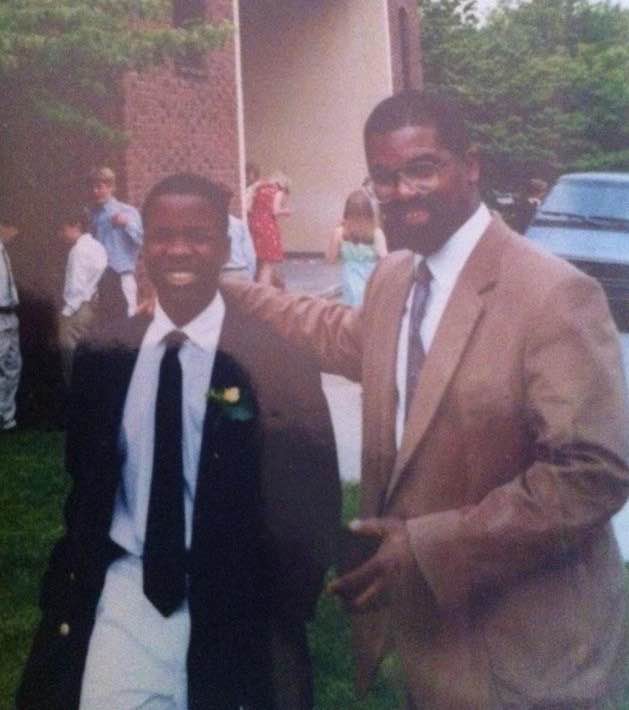 I ended up at my last choice, the University of Maryland. Lurking in the background of my overall apathy towards the college experience was my blossoming alcoholism, and it didn’t take long for me to find “my people,” the ones who let me drink the way I wanted to drink. I hated everything about the idea of fraternities, but I joined one so that I could find a home for my drinking. Eventually, my GPA sank to 0.36. I was proud of this number, the same way I would have been proud to see the same number show up on a breathalyzer. I racked up a felony (malicious destruction of property) instead of a spot on the dean’s list, thinking the entire construct of college beneath me.

It took only a year for the school to ask that I not to return the next semester.

The day I left (hungover, of course), I stole a burned copy of College Dropout from the frat house as I was actually dropping out of college. My mom picked me up and failed to stifle her crying as I sang along to Radiohead’s “Creep” like the little shit I was. This would be the first of four schools I would enroll, then fuck around in, and then turn my back on.

Over the following decade, drinking and drugs put my life into freefall, making graduating, or even just showing up to class, an impossibility. (Being an egomaniac with an inferiority complex didn’t help either, I guess). By some weird miracle, I’ve been sober for a little over four years, and now that I’m no longer obsessed with getting fucked up enough to die, the question of finishing school has resurfaced.

I recently saw an older friend I hadn’t seen in awhile, the type who might nod in agreement to a New York Times trend piece about the malaise of millennials. His first question was “Are you back in school?” I caught feelings. He then went on to add that it was kind of pointless for me to mentor a 19-year-old through a program in Baltimore: “How can you tell him he should finish college if you haven’t.”

Though it’s not the most glamorous gig in the world, I have a good job, set up six years ago through a friend I went to elementary, middle, and high school with. I have a retirement plan that I thought I wouldn’t live long enough to need and health insurance, and I’ve been able to live on my own through most of the recession. And I don’t have kids, thankfully, because I still like ice cream for dinner. I understand that I’m incredibly fortunate, and I’ve heard plenty of stories from friends and strangers of the other side.

Yet there is always that feeling, often incited by the stern words of family or friends, that I should want more for myself, to move on to the “next level.” It’s as if being contented with (or even more so, grateful for) my here and now is to die some sort of unceremonious death. America has a disease of “more” not unlike alcoholism: There’s no such thing as enough.

I can honestly say that I eventually want to go back to school, but not for any of the reasons I did before, but maybe just to … learn. Earlier days in school almost killed my love of learning, a love that I picked up from my Vietnam vet dad who taught himself how to do all kinds of shit and never set foot in a college.

But when lawyer friends are telling me about their $250k student loan tab, I’m like nah, there’s gotta be a better way. We were told that if we work hard, we’d be rewarded with all the bounty that this perfect, God-favored country could offer. Between cutting lines of coke in strangers’ bathrooms, I’d crack wise: “Fuck that, I don’t need college,” when I really meant I don’t want college, or, I’m not cut out for college. My version of impostor’s syndrome usually manifests as fantasies of a room full of faceless people telling me to take my “Some College” ass on somewhere. That thinking thankfully has dissipated, but there are still lingering “I can’ts,” rooted in fear.

Overpowering that fear is a sort of self-centered guilt, the thought that I have let my parents, and specifically my mom down. She worked hard, and in many ways, so did I. Sometimes, we’d go without the car, or certain appliances, but there was always food on the table and a warm bed to sleep in. There are many who can’t say the same, but I could only think of myself then. We were a single-income household, something I held against my father, especially when comparing my insides to the outsides of classmates whose dads drove Bimmers and had more than one house. And all-nighters in high school were commonplace, given the rigorous curriculum of my school and my “play now, pay later” outlook on life. Only in adulthood have I touched base with the gratitude I should’ve had – for both my parents and for that school – as a kid. I’m grateful she had a steady Fed job, and even more so that my parents were willing and able to seize an opportunity for me that they could’ve never dreamed of for themselves.

Recently, she told me that I shouldn’t feel guilty, that our economic struggles when I was growing up were mainly a result of being house-poor, as my parents tried to grasp whatever was left of the American Dream in the mid-90s. It is a game that of course is still being played today: trying to buy a house in a good area so the kids can go to good schools and then good colleges to get good jobs so that the cycle can continue, or even just begin in the case of many black families. Whether it’s redlining, predatory loan tactics or other factors, our families too often aren’t even given the opportunity to post up at the starting line, increasing the pressure to turn gratitude into action.

There is also the burden of the ancestors, the James Merediths and Lila Fenwicks who risked life and limb to get that piece of paper. The cynic in me wonders if they knew that their fight would result in black degree-holders seeing their wealth and income shrivel in the last two decades, or that they would be disadvantaged in a discriminatory job market when competing with white graduates? Would they have taken a different tack? Letters after your name don't do much to change the negative, cruel, and sometimes deadly ways this society views those with black skin. Despite the heroic achievements of our forebearers, half a century later Harvard professor Henry Louis Gates, Jr. still made headlines because he was trying to enter his own house while black.

Giving large portions of my present and future money to a hedge fund with a school attached seems absurd, if not counterintuitive, and yet I still feel compelled. It’s hard to defeat the programming instilled in me since elementary school. There are of course plenty of people who’ve taken a longer journey towards a degree or multiple degrees than I have, but I’m feeling less bound to the path I started in 2003. I have been beaten over the head with statistics of the lifetime earnings of graduates vs. non-graduates for as long as I can remember, and I can safely say that is the last thing that would influence my decision at this point, which is more than I could say in 2003.

“Free” college in Bernie’s (hypothetical) America sounds like a plot point in a movie more than anything that could actually happen. And trying to enroll in a German uni because they’d rather educate me without fucking my money up is something I would’ve never thought of having to do previously. Without coke crashes and boozy oversleeping to worry about today, I’m grateful that I even have the option to consider school again. But as this generation watches its future (financial and otherwise) vanish, while also being sold the corroded, meritocratic promises our parents and theirs were sold, it becomes more difficult to reckon with trying the old game again. I have no idea what the future holds on this front. Maybe I’ll end up like Alfonso “Ponchie” Gonzales, a WWII veteran set to graduate from USC at age 96. Maybe not. I’m just glad to see things more clearly than I did not even a decade ago, and to even be alive to consider the shit to begin with. 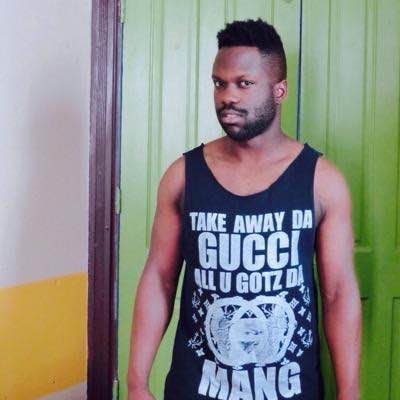 Kasai Rex is a writer living in his hometown of Baltimore. Analyzing race, gender, and class in America and abroad, his essays and reviews have appeared on Good, Abernathy Magazine, Salon, Vice, and Blavity. You can follow him on twitter @KasaiREX.